I know the media is full of stories telling us  housing is so unaffordable that first home buyers are being priced out of the market, but that’s not what the latest HIA – Commonwealth Housing Affordability Index suggest. 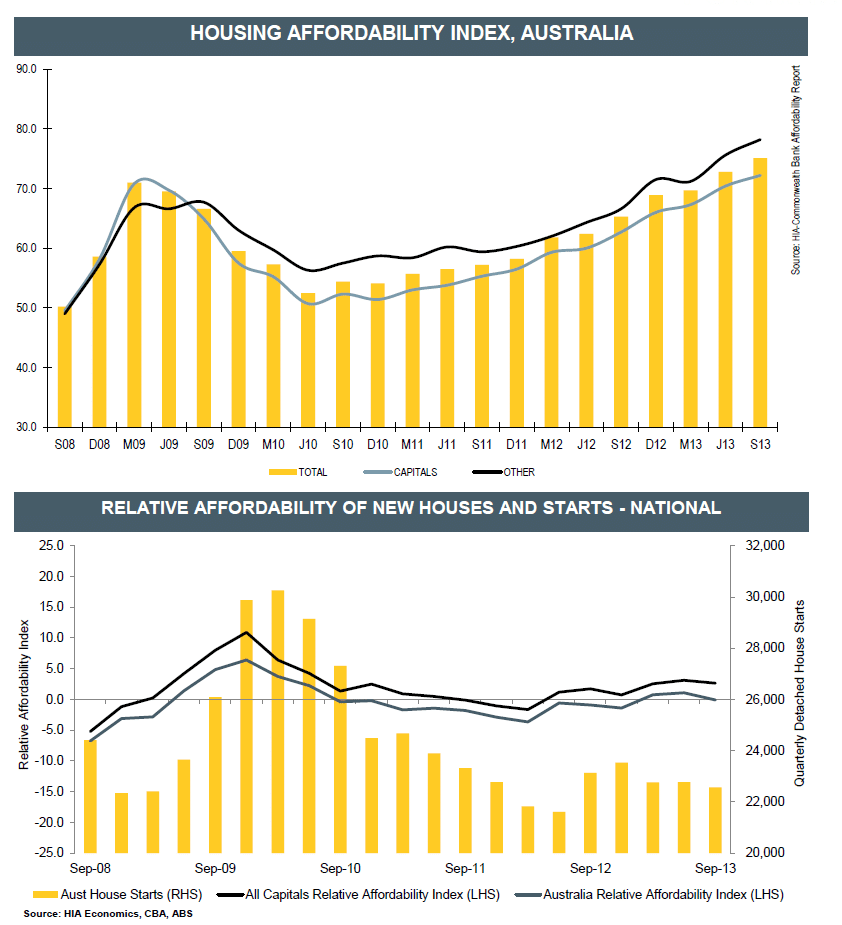 The increases were stronger across regional Australia, with the affordability index rising by 3.4 per cent over the quarter to reach 78.2. This level is 17.4 per cent higher than in the same quarter in 2012.

Despite widely-publicised dwelling price increases in some markets in recent months, affordability has continued to improve as a result of reduced interest rates.

Since late 2011, the RBA has cut rates by a total of 225 basis points, including reductions in both May and August of this year. As a result, the discounted variable interest rate for mortgages has declined from 7.05 per cent to 5.18 per cent over the same period.

Affordability has been further enhanced by continued increases in weekly earnings over the past year,

In the September 2013 quarter, the HIA-CBA Housing Affordability Index improved in every one of the seven capital cities covered.

Outside of the capital cities, affordability improved in the September 2013 quarter in four out of six non-metro regions reported. The strongest quarterly improvement was for regional Victoria with a rise of 5.1 per cent, followed by the non-metro areas of Queensland (4.4 per cent), New South Wales (2.8 per cent) and Western Australia (2.5 per cent). Affordability declined by 1.2 per cent in regional Tasmania and by 2.2 per cent in regional South Australia.

“Obviously longer term structural improvements to housing affordability will be realised through an appropriate supply of housing commensurate to the needs of a growing population,”

“This necessary growth nonetheless faces constraints that require attention as a matter of priority.”

“High taxation on new housing has adverse effects on affordability right across the market. The less than expedient release of shovel-ready land supply for new housing and inefficiencies in the planning process also need to be tackled. It is also important that infrastructure funding models are reviewed by policy makers so as to ensure that the affordability improvements of recent years prevail over the long term,” concluded Shane Garrett.