The latest HIA-CBA Housing Affordability Index is likely to cause much debate!

The report suggests that despite surging house prices, low interest rates have brought affordability to its most favourable level in 12 years.

The HIA-CBA Housing Affordability Index improved by 2.1 per cent in the March quarter and chalked up a 10.8 per cent annual rise. 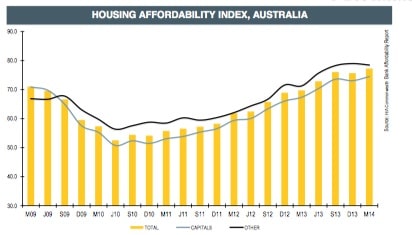 “Increases in home prices over the past year have been significant. However, the impact of lower interest rates and continued earnings growth has ensured that home purchase affordability has improved over the past year for existing home owners and those on the cusp of entering the market in the short term,”

“The RBA has signalled that interest rates are set to remain low for some time,” added. “As home price pressures ease off, we expect home owner affordability to remain reasonably favourable for the foreseeable future.”

Affordability across the States:

In the March 2014 quarter, the HIA-CBA Housing Affordability Index improved in two of the six surveyed capital cities: Sydney (+2.2 per cent); and Perth (+0.1 per cent).

Affordability was unchanged in Melbourne during the quarter.

Three of the six capital cities saw affordability deteriorate during the March 2014 quarter, those being: Adelaide (-4.6 per cent); Hobart (-1.3 per cent); and Brisbane (-0.7 per cent).

Affordability in the Australian Capital Territory saw an improvement of some 7.7 per cent during the quarter.

Affordability deteriorated in regional areas of Tasmania (-6.1 per cent), Queensland (-2.2 per cent) and Victoria (-1.8 per cent) during the March 2014 quarter.

Many would disagree saying that it’s hard for first home buyers to get into the market and that’s true.

But there’s nothing new about that. It’s always been hard to get your first footing onto the property ladder and it always will be.

Others argue this index does not measure “real” affordability.

The index measures a wide range of factors but in particular house prices, interest rates and incomes.

But in calculating the index, only the major costs of ownership are considered, namely the house price and monthly mortgage payments. The index assumes that the the buyer is providing a 10% deposit and financing the remaining 90% of the purchase price with a 25 year variable rate mortgage.

Yet other studies also show that the current prevailing low interest rates, wages growth and a slowing pace in house price growth have kept housing affordable for many. And with interest rates likely to remain low for some time to come it is likely that house prices will continue to rise.

But this is exactly what the government wants. As I explain here the Government is counting on a construction led economic boost and more consumer spending.