One of the ways to pass time in Year 9 maths was to try to memorise the number Pi (π) to as many digits as possible.

Clearly I must have been very bored in maths lessons as I can still recite Pi to quite a few digits: 3.14159265…it’s one of those magic numbers which never repeats…even if you go past 100,000 digits.

To my knowledge, I’ve never had a single practical use for this information…until now!

Every credible independent study undertaken in Australia on the subject (from AHURI, to Access Economics, to Macquarie Bank and others) has found there to be an inverse relationship between the value of property and its distance from the Central Business District (CBD), and the respective rates of capital appreciation over time. 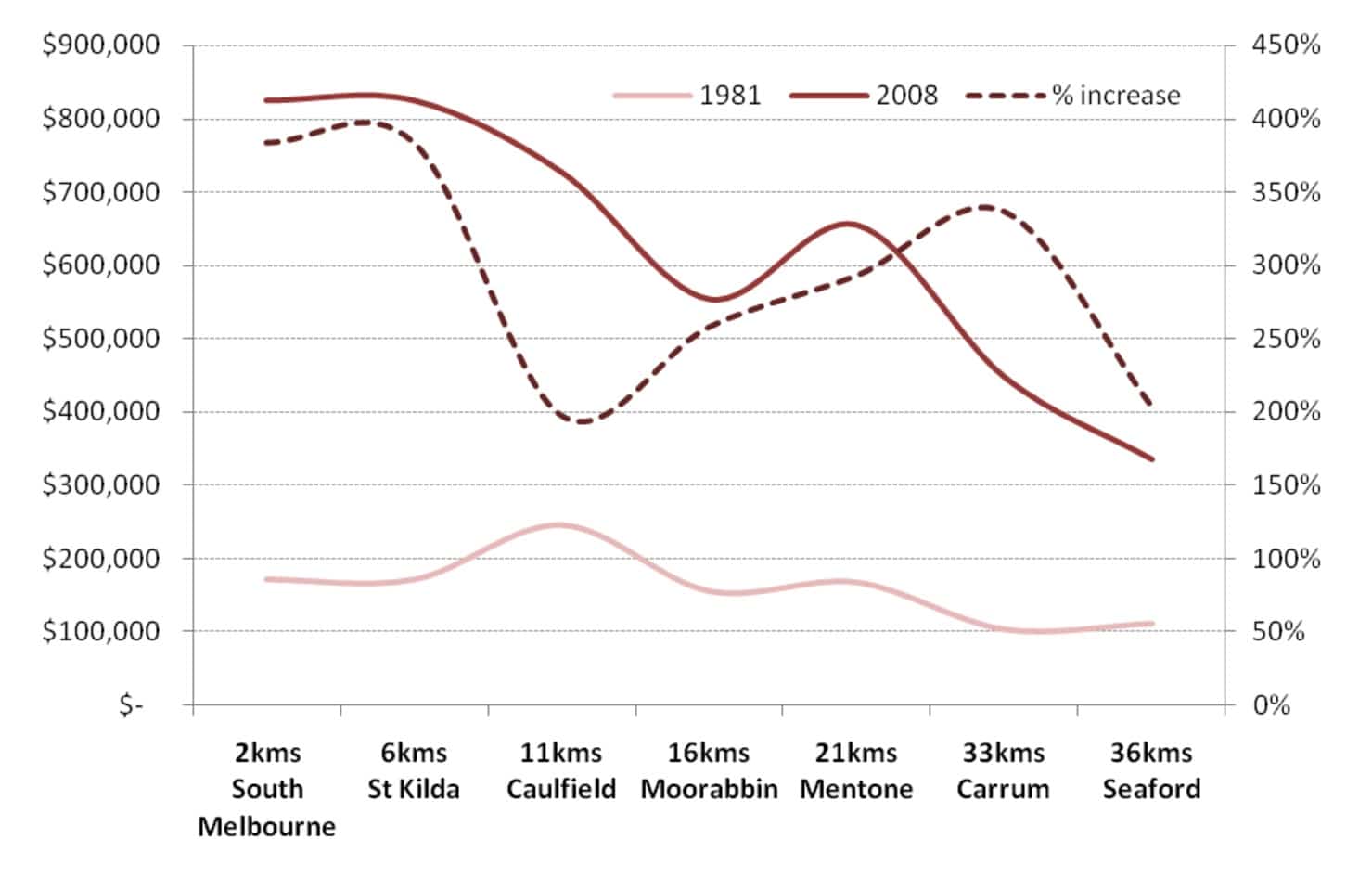 In Sydney, houses in Penrith are cheap, but in Point Piper or Pyrmont they are expensive.

This is clearly not accidental. Simple mathematics should tell you that for each kilometre you travel from the CBD more land becomes available for development.

Forget the ocean for a moment.

If you draw a circle 6km around the central point of a capital city, you will find that there are only 113 square kilometres within that circle, yet potentially millions of people who desperately want to live in that space, and will pay a high premium for the privilege of so doing. 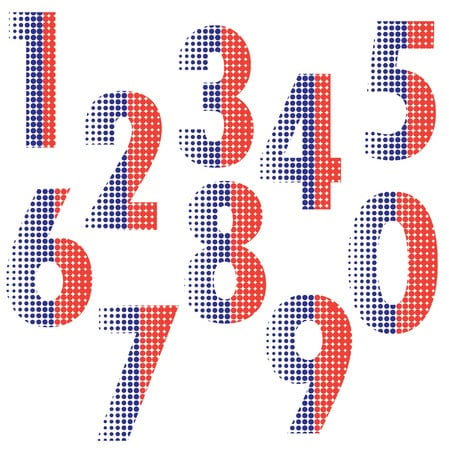 Going back to year 9 maths, if I recall correctly, the land area of the circle in this case is: the square of the radius multiplied by Pi:

That is to say, very little land indeed which is in massive demand.

To put that in some kind of perspective, even Australia’s high-density suburbs such as Sydney’s Newtown, Bondi Beach, Waterloo, Chippendale, Millers Point, Haymarket, Redfern and Potts Point can only cram in around 10,000 persons per square kilometre.

For this reason, the demand for the land will over time outstrip the limited supply many, many times over.

Even a century ago it was noted that Australians, like their British counterparts, liked to live in the suburbs, rather than in the city itself.

For this reason, property located approxmately 6-12km from the CBD also tends to be highly sought after.

The total land in the 6-12km ring is a slightly more generous 339 square kilometres, which is calculated as:

Just one problem: due to historical development and our climate, all of Australia’s major capital cities are located beside water thus creating an instant artificial land shortage close to the city.

You can try buying property 12km to the east of Sydney’s GPO if you like, but although this area may have been dry land 50,000 years ago, today it is the Pacific Ocean.

Ergo, there is massive pressure on land values in this ring too. 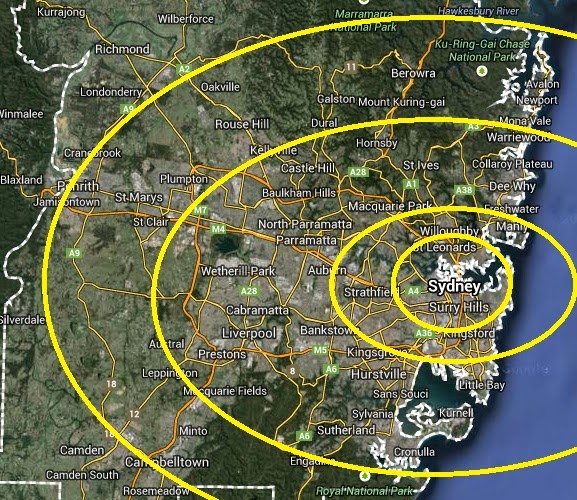 Sticking with our 6km bands, the notional 30-36km ring has around 1,250 square kilometres of land, less that bit which is located in the ocean.

Not only that, there is also far lower demand for living so far away from the city, particularly since Australia’s inland climate quickly becomes rather brutal, with extremes of temperature both hot and cold, and amenities and infrastructure tend to be lacking.

This is why when people recommend investing in Penrith or or its surrounding areas for higher rental yields, which is even further away from the city at 50km out, one may remain far from enthused.

The are hundred upon hundreds of square kilometres of land for development in the suburban rings out to the west and they will never – and I mean not ever – be able to command a price premium nor long-term outperformance in terms of capital growth.

Within each property cycle, there will be some ripple effect of price growth outwards, but growth rates will lag over the long term, as every statistical study has proven.

1 – Due to historical development, the inner ring suburbs are fully built out. There is no land available to release which instantly places massive pressure on prices;

2 – The city has employment, amenities, and is close to beaches and entertainment, restaurants, schools, hospitals, and everything else which people generally want to live near; and

3 – in equal parts due to affordability and convenience, apartment living in the inner suburbs close to the city is becoming ever more popular across the demographic social groups from DINKs, to middle-ages singles (aka. mingles), to downsizing retirees, Gen Xers and Generation Ys, and this is being further fuelled by massive immigration and natural population growth.

Unfortunately, there is only a very small amount of land close to the city and therefore, over time, the price of that land will increase.

I knew that Pi number would come in handy some day.

'How High School Maths Can Help Property Investors' have 1 comment