One of the reasons we invest in property is because well located properties give us "wealth producing" rates of return.

They grow in value faster than inflation and at the same time give us a rental return to help pay the mortgage.

But not all properties beat inflation.

According to recent figures provided by Corelogic "real" (inflation adjusted) property values have gone backwards in most capital cities over the past decade.

The results showed that national dwelling values fell by -1.0% and were -0.7% lower over the past 12 months, however, Hobart was the only capital city where real values increased over the quarter (+3.0%) with Sydney recording the largest quarterly fall (-2.2%).

“These latest figures really highlight just how narrow value growth has been in the national housing market over the past decade. It also highlights that low mortgage rates alone have not been the key driver of value growth - mortgage rates are the same in Sydney as they are in Perth yet the former has recorded real growth of 43.3% while the latter has seen values fall by -25.0%.” 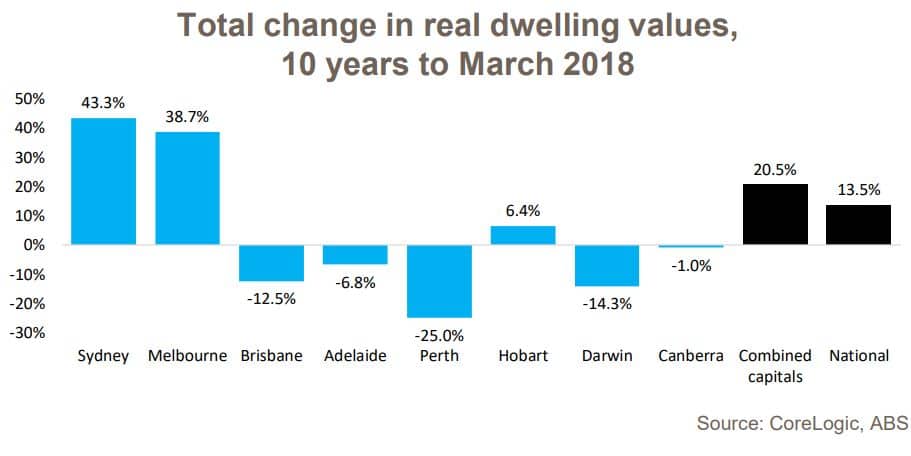 With dwelling values dropping over recent months, all capital cities, except Hobart, now have real values which sit below their previous peak.

Nationally, values are -2.0% lower than their June 2017 peak and across the combined capital cities values are a slightly greater -2.5% lower.

Let’s take a look at how dwelling values have tracked in inflation adjusted terms across each capital city. 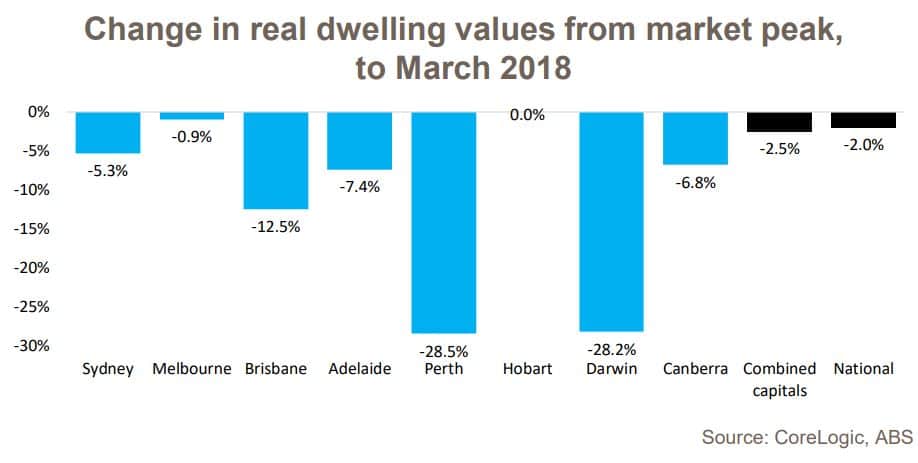 Mr Kusher said, that although the rate of inflation is quite slow and remains below the Reserve Bank’s target range of 2% to 3% annually, value growth is now broadly slower and is expected to remain that way over the coming quarters.

“As a result, when looking at inflation-adjusted dwelling values the expectation is that they will continue to fall over the coming quarters which means that as the cost of other items increase and inflation rises, relatively speaking, the cost of housing will reduce. We’ve seen this result occurring in most capital cities for a number of years but is a relatively recent development in Sydney and Melbourne.”

“The flow-on effect of value falls remains to be seen, however, it may result in less expenditure elsewhere across the economy, particularly in Sydney and Melbourne which have had strong retail demand over recent years due to the wealth-effect of increasing dwelling values.”