If you’re like me you’re keeping a close eye on interest rates.

Well… two bits of recent news make me think interest rates will remain low for some time to come:

1. The global economy faces another five years of stagnation

The International Monetary Fund recently cut its growth forecasts for the third year in a row and urged nations to ­reinvigorate economic reforms.

It now expects world growth will reach 3.3 per cent this year, the same as last year, and 1.4 percentage points lower than it thought likely when preparing its forecasts three years ago.

Before the financial crisis, global growth rates in excess of 5 per cent were the norm.

“Demand shortfalls in advanced economies, together with the erosion of potential output, could lead to sustained global economic weakness over a five-year period,” the IMF report says. This is not yet its central forecast, but the fund sees it as the biggest risk to the global economy over the medium term.

In fact, as the following graph shows, while America’s economy is in pretty good shape, the risk of recession in Europe is around 40%.

While that may not directly affect Australia that much, overall stagnant world economic growth will. 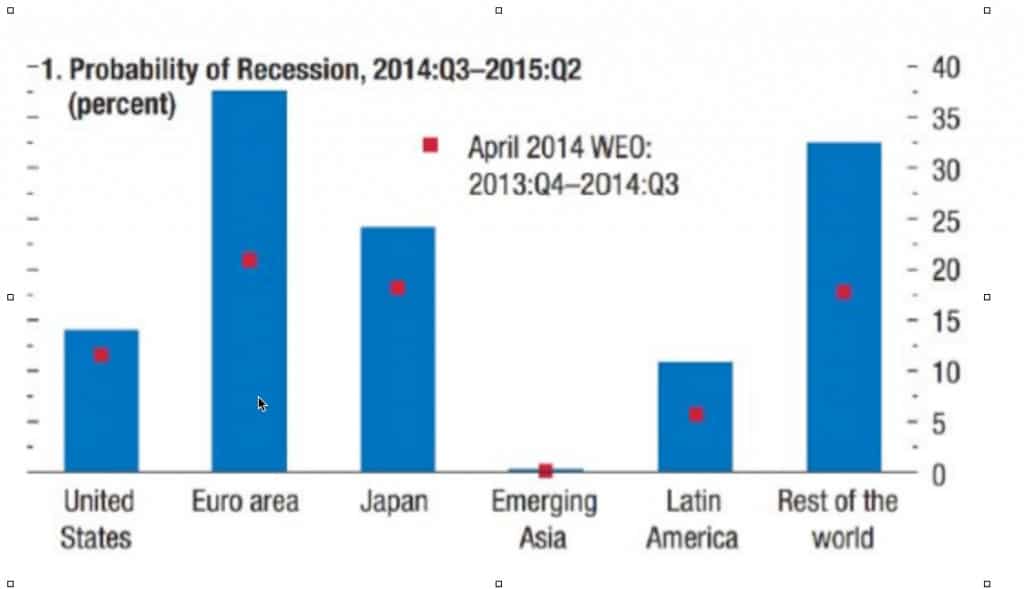 In response to this, the RBA is expecting Australia’s growth to remain below its long-term trend rates.

This is likely to keep interest rates low for a while with economists predicting rates to remain on hold until at least next year.

World inflation is currently low and likely to remain so for along while if our major economies are floundering.

CPI inflation rates are now falling, if anything. In Europe, inflation is barely positive at 0.3%, while in the US, the latest CPI reading showed annual inflation dipped from 2% to 1.7%.

Inflation rates have also declined China and Britain this year.

Now..like Australia,  other countries use interest rates to try and target inflation.

If you think about it…the RBA uses interest rates to try and keep inflation within the 2-3% target band.

What all this means is that  global monetary policy is certainly going to get easier and global interest rates are likely to fall.

This backdrop of a weaker world economy will leave the RBA with little scope to raise interest rates in the foreseeable future for many reasons including:

For mine: interest rates will remain low for some time yet and this will clearly be positive for our property markets.