While the finder.com.au Reserve Bank Survey,  expects the Reserve Bank to keep the cash rate on hold at its last board meeting of the year on Tuesday, December 2, 2014, property prices are tipped to rise further in 2015.

What will happen to interest rates?

The remaining 34 experts (92 percent) are forecasting the next cash rate movement will be an increase.

Regardless of the direction, the vast majority (94 percent) of experts are expecting the cash rate to move next year, with just two experts (6 percent) forecasting the next move to be in 2016 – James Bond (Financial Services Council) and Noel Whittaker (QUT Business School). 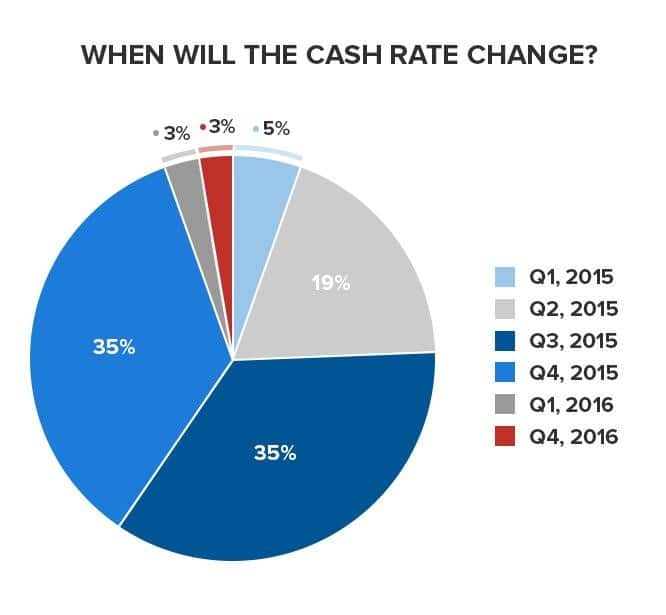 “Of the 37 experts, many raised several key issues that influenced their predictions including the need for stability, a slow economy, a weakening Australian Dollar and no unexpected movements in the past month.

“It was also interesting to find some experts in the survey discussing the reality of a rate cut next year, with factors that could occur such as a falling housing market and slower growth in China and other foreign economies.

“There is a definite shift in the direction that the cash rate could take, with last month’s survey results showing all 33 experts were forecasting the cash rate to rise next year, including one expert (Andrew Wilson, Domain Group) predicting a rate cut before an upward cycle begins.

“But now there are three experts on the panel who are betting on a rate cut and others citing a possibility of a drop.”

Despite most of the experts betting the cash rate will rise next year, 69 percent believe property prices will continue to climb.

“If you’re a first home buyer struggling to get into the property market this year, next year isn’t looking to get any better.

“Most of the experts in the survey are expecting property prices to continue rising however, they don’t expect the higher costs will dramatically impact the first home buyer market. Two in three (64 percent) are expecting the same level of first homebuyers next year compared to this year, with only five expecting fewer first home buyers.

“With the national median property price across our capital cities hitting $545,000 in October – 8.9 percent higher than the previous year – it’s a good time to jump into the property market if you are prepared. But there’s no point in rushing in you’re not ready, because overstretching your budget could have serious consequences if interest rates rise next year. Reading a first home buyer guide can be a great way to assess if you can actually afford to take out a home loan before rates move.”

What the experts had to say: