Did you know August 2012 marks 5 years since GFC began?

RateCity has conducted a study into the banking sector and what’s changed for borrowers and savers since the GFC. They found that it’s tougher for borrowers and it’s only better for the savers that shop around for a good deal.

For the past five years since the GFC began, one of the most significant changes was financial institutions started to move their lending and deposit rates independently of the Reserve Bank cash rate, according to RateCity.

This has been good for savers but has brought uncertainty and higher costs for borrowers. 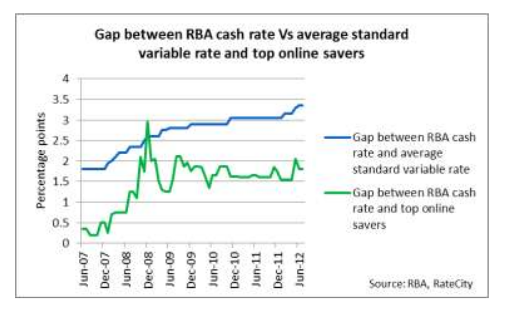 “Financial institutions have been pushing harder for deposits by keeping their maximum rates relatively high compared to the cash rate. Savers can take advantage of this by shopping around for savings accounts and switching deals when promotional rates expire and the bonus rates drop.

“Variable home loan borrowers however, faced dramatic changes in interest rates during the past five years, with 385 basis points between the lowest and highest average standard variable rates over that time. What that means is households with a $300,000 mortgage were paying almost $800 more per month in repayments compared to the lowest rates.

“Whether you’re an existing borrower who experienced these ups and downs in the past five years or you’re looking to buy your first home this year, it shows how important it is to keep within your borrowing budget, ensure you have enough buffer in case rates rise and compare how your home loan measures up to the rest of the market using credible financial comparison websites like RateCity.com.au.”

RateCity found lending criteria quickly tightened across the home loan market by mid-2009, after many lenders were offering home loans with minimal deposits, if any at all.

For instance, in mid-2008, RateCity recorded over a quarter (26 percent) of all home loans in its extensive database (out of more than 2000 home loans) with 100 percent loan-to-value ratio (LVR), which means borrowers didn’t need a deposit.

By mid-2009, there was only one home loan in RateCity’s database which offered a maximum LVR of 100 percent (see table below).

Ms Hutchison said prospective borrowers are facing a tougher home loan market, and need to be prepared before jumping into debt.

“Borrowers and lenders alike need to accept the fact that the lending environment will never be the same as what it was before the GFC. Borrowers are faced with uncertainty of interest rate movements and tighter lending criteria, which means they need to work harder at finding and securing a good home loan deal.

With lenders offering 100% loans to people who could not always afford them back in 2007 we could have easily gone the same way as the USA and other overseas markets.

The more prudent lending criteria in Australia means we have a solid banking system, not subject to all the problems the banks have had in the USA and in Europe

And that has to be good for property investors.

'Five years on: tougher banking after GFC' have 1 comment