First Home Buyer numbers are above average across every state and territory.

But this is likely to subside as housing affordability deteriorates and investor demand picks up. 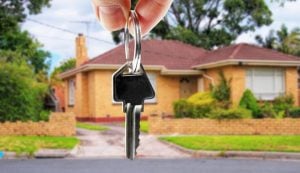 A similar trend can be seen across every state, with first home buyers a larger proportion of the market relative to the decade average.

There are a variety of factors that have provided first time buyers with a leg up into the housing market.

Housing affordability has improved through the recent housing downturn, mortgage rates have come down, home loan servicing rules have been relaxed and some states have provided additional incentives for first home buyers in the form of stamp duty exemptions or discounts as well as existing first home buyer grants which generally apply to the purchase of new dwellings across most states.

First home buyers, as a % of all owner occupier mortgage commitments nationally

There’s also the fact that first home buyers haven’t had to compete as fiercely with investors, with investor activity generally trending lower since peaking in 2015 at 43% of mortgage demand.

The August update shows investors comprised only 26% of mortgage demand which is well below the decade average of 34%.

First home buyers are the most active across the Northern Territory and Western Australia where this segment of the market comprises 45% and 37% respectively of owner occupier mortgage demand.

These are also the two regions where housing values have fallen the most, providing a substantial improvement to housing affordability.

The regions where first home buyers are the least active are South Australia and Tasmania where first time buyers comprised 22% and 24% of owner occupier mortgage demand in August.

Despite being the lowest of any state, first home buyer participation remains above the decade average in these regions.

Housing prices are once again rising across most regions of the country while growth in household incomes remain sluggish, which will create renewed housing affordability pressures in markets where home values are rising faster than incomes.

Additionally, investor activity is likely to ramp up as the prospects for capital gain start to become more widespread and the spread between rental yields and mortgage rates remains around record lows.

In the past, rising home values and greater participation from investors has seen first home buyer activity reduce.

The First Home Loan Deposit Scheme, which goes live in January next year is likely to be oversubscribed, however we aren’t expecting this program to make a substantial difference to overall first home buyer participation rates considering the scheme is capped at 10,000 buyers, which equates to less than 10% of first home buyers numbers over the past year.

'First home buyers back but not for long' have no comments