The Housing Industry Association has released the latest edition of the Stamp Duty Watch report.

“This issue of Stamp Duty Watch includes a special feature on First Home Buyers. While FHBs receive grants from state governments and concessions on stamp duty in several states, the overall effect of these supports is unimpressive.”

“For the purchase of a median-priced new home, FHBs in NSW, Victoria and WA will use up the whole grant and more on the stamp duty bill. In SA and the ACT, FHBs are left with only a few hundred dollars of their grant to actually put towards their new home after stamp duty has been handed over.”

“The latest issue of Stamp Duty Watch shows that the tax adds significantly to the cost of buying a home in each state for all types of homebuyer.”

“Dwelling price growth over the past year has pushed stamp duty bills even higher, with the Northern Territory, Victoria and NSW particularly badly affected. Stamp duty bands and rates do not respond to episodes of strong price growth.”

“Stamp duty holds back new home building activity and has very detrimental effects on home affordability.
The tax adds hugely to household indebtedness by forcing monthly mortgage repayments upwards.
Reform aimed at reducing the burden of the tax must become a priority for both state and federal governments.”

During November 2014, the Stamp Duty bill for the purchase of a median-priced established dwelling by a non-FHB owner occupier in each state is shown below. 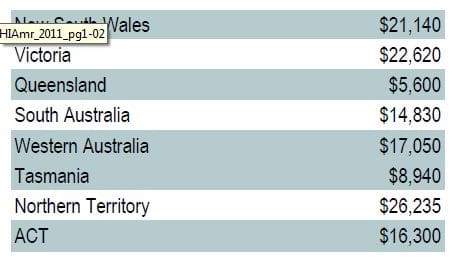