Housing affordability in Melbourne is under a cloud especially when it comes to units suitable for families, according to RiskWise Property Research.

While a RiskWise analysis places Sydney 9th in the world when it comes to housing affordability, Melbourne is not far behind. It is the 2nd most expensive city to live in Australia and 11th in the world.

Unlike the Annual Demographia International Housing Affordability Survey which measures typical average-sized dwellings in cities across the globe, RiskWise analysis targets only units 105sqm in size so that the comparison remains the same throughout.

We compared units (and not ‘dwellings’ that include both houses and units) and we estimated the price, for all locations of a 105sqm unit, as these are suitable for families, while Demographia used the standard international practice of ‘dwelling price’ to determine housing affordability.

The problem with this ratio is that it does not compare apples to apples.

For example, you can’t compare Hong Kong to Sydney dwellings when dwellings in Sydney include a high proportion of houses and also the average-sized unit in Hong Kong is only 46sq m, as compared to 105sq m here.

It is not helpful as a comparison.

However, if you take the approach RiskWise did, which was to compare only units and assess the estimated price of a 105sq m unit relative to price-to-income ratio, you’ll find that the results are completely different.

The point is, Sydney and Melbourne are not as bad as first thought when compared to other cities.

And yes, while in general families cannot afford a 105sqm unit, the situation in other places is significantly more serious.

Both Sydney and Melbourne, as global cities, could potentially be even less affordable.

The Demographia survey ranked Hong Kong as the world’s least affordable city, followed by New York, Tokyo and London with Sydney was ranked 9th and Melbourne coming in at No.11.

The following is RiskWise analysis of the top 10 least affordable cities based on a 105sqm unit size: 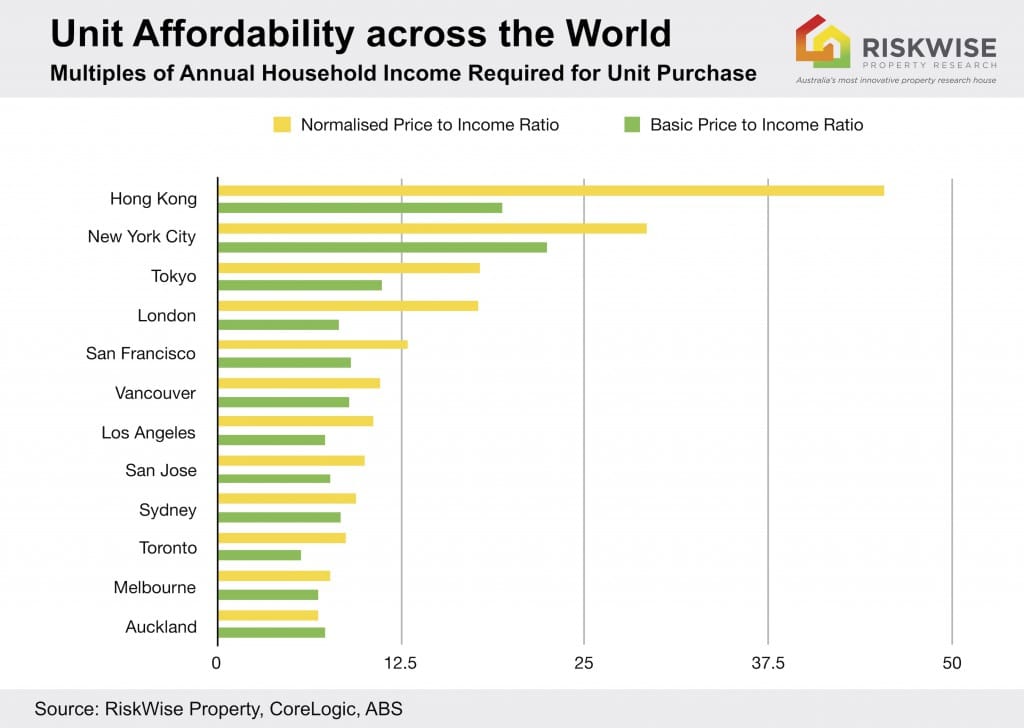 The difference between Sydney and Melbourne is that the Victorian capital has a better supply of units and, therefore less capital growth and more affordable properties.

However, while in the last five years capital growth of units has been good, it has not been as good as Sydney.

More recently, Melbourne price growth has significantly decelerated, and in Sydney lending restrictions and the Banking Royal Commission have resulted in price reductions of 4.5 per cent in the past 12 months.

They are not fully substitute products.

The needs of families differ from those of singles and couples and many new apartments are not suitable simply because they do not have three bedrooms.

This means there is an imbalance between the supply of units to the market needs, not forgetting that the closer to the CBD, the smaller the unit.

The following graph is a comparison of unit affordability throughout Australia: 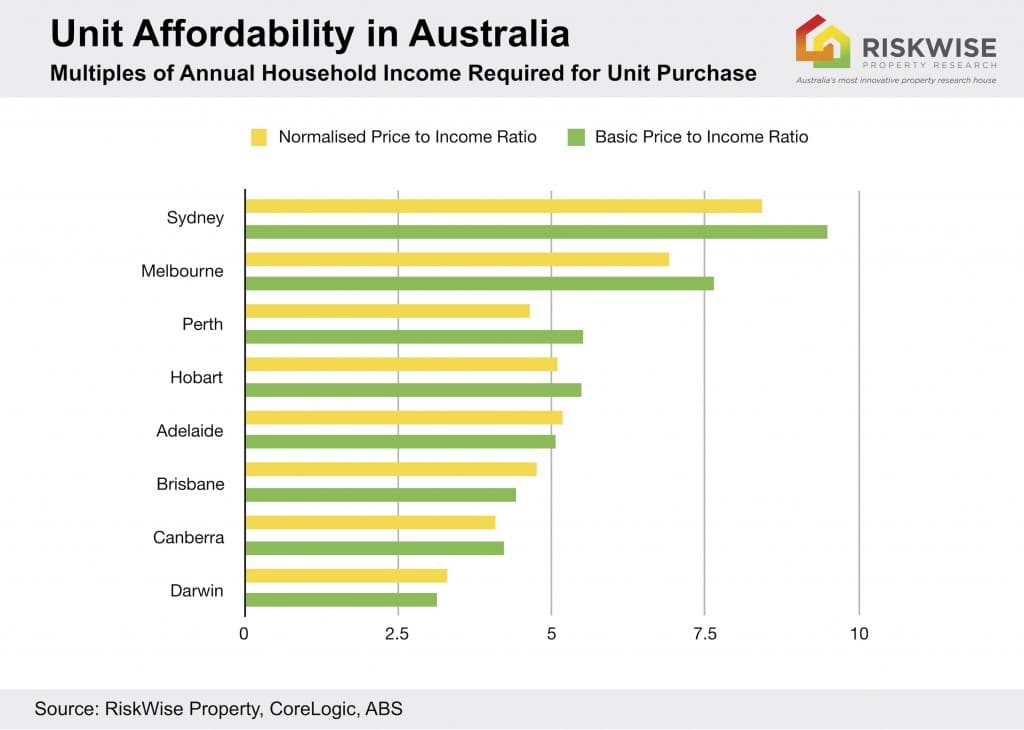 Whether you take a world view or an Australian one, there appears to be a complete disconnect between the price of units suitable for families to the median household income.

The people who own the majority of residential properties that are suitable for families are mainly higher income earners and investors.

They are not standard household earners.

They are, largely, people at the top 50 per cent of income earners or investors who are cashed-up.

The gap between the household income they need to buy an inner-city unit to the income they really have is so huge a household with the median income would really struggle to afford one suitable for a family in those cities.

This, effectively, creates two classes: ‘the haves’ and ‘the have nots.

It comes down to undersupply of suitable dwellings that force the price up and make them completely unaffordable in both Sydney and Melbourne.

'Family units out of reach for Melbourne buyers' have no comments