The issues keeping those on low incomes out of the housing market are only getting worse over time, writes…

The current parliamentary inquiry into home ownership is in the midst of public hearings, questioning, among other things, the decline in home ownership among younger Australians.

This, however, is not a recent issue.

For a long time young people have found it difficult to purchase their first home.

Home ownership rates for households aged 25-34 began to decline close to 40 years ago; declines for those aged 35-44 followed a decade later.

Declines have been most dramatic among low to moderate income households; only younger households in the top quintile of the household income distribution have been (relatively) protected. 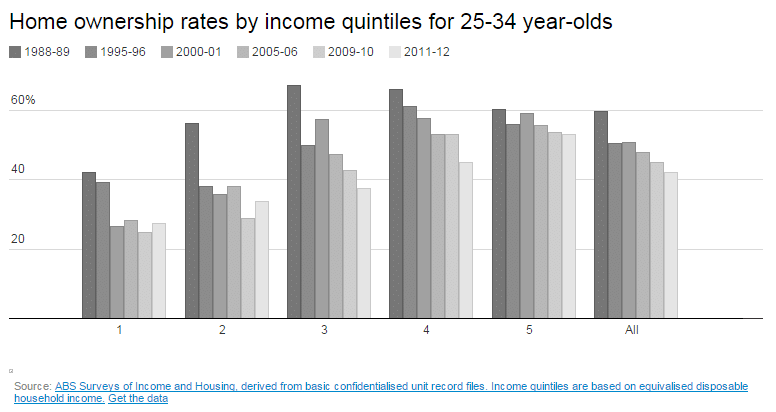 These declines date back to social, demographic and economic changes that began up to 40 years ago.

Social change in the 1970s saw the number of both single adult and dual income households increase.

This resulted in increasing disparities in household incomes.

These pressures have been maintained by ongoing household income inequality, which has been increasing in Australia since the mid-1980s, compounded by growing earnings inequality and the impacts of uneven economic growth.

The squeeze on lower income households was intensified during the 1980s by high inflation and high nominal interest rates that limited borrowing capacity and created significant deposit gaps for those already facing income constraints.

From the 1990s, younger households were additionally constrained by the burden of education debt and deterred from home ownership by the implementation of compulsory superannuation which slowed down earnings growth.

As inflation and nominal interest rates fell throughout the 1990’s, financial liberalisation contributed to an increase in the availability and reduction in the cost of housing finance.

This, along with associated changes in lending criteria, disproportionately benefited high income households, most of whom were already established home owners.

The willingness of established households to invest in both owner-occupied housing and investor housing was fuelled by changes in our tax system that made housing an extremely attractive investment.

Tax benefits for owner-occupiers increased in 1985 when owner-occupied housing was exempted from the newly introduced capital gains tax.

For housing investors (whether negatively or positively geared), benefits arose from the asymmetric treatment of income and expense.

Declines in agriculture and manufacturing and the rise of the services sector have led to an increasingly urbanised population with jobs being concentrated in the centres of our capital cities.

Increased demand has contributed to an increase in, and a steepening of, land price gradients in these cities.

This is partly a result of the innate shortage of centrally located land in areas where job concentration is greatest, partly in response to state government strategic policies encouraging infill development, and partly in response to the inadequate investment in, and cost of, transport infrastructure.

In other words, increasing land values in urban locations are an inevitable outcome of the combined impact of:

These might ease supply shortages driven by a growing population, but they are less likely to work when price growth is coming from increasing demand for bigger and better located dwellings.

This demand is driven both by economic growth and by increasing inequality.

They have increased the wealth of established home owners and provided a platform for further increases in demand for housing, reflected in upgrading of existing homes, and in demand for second homes and investment dwellings.

Higher housing prices arising from demand and supply pressures have had a number of effects.

In so doing, they have excluded a growing proportion of younger households, and particularly low to moderate income households, from home-ownership.

Some of this group can’t afford to buy, others would rather rent in a higher cost location closer to job opportunities than live on the outskirts of our metropolitan regions where housing may be more affordable.

Whether this matters is an entirely different question.

But it does suggest it’s time policy makers recognise the underlying structural drivers of current housing outcomes and consider which households will benefit from new policies that support property ownership.

Judith Yates is Honorary Associate Professor at University of Sydney. This article was originally published on The Conversation. Read the original article.

'Explainer: what’s really keeping young and first home buyers out of the housing market' have no comments