Today the Reserve Bank of Australia has kept rates on hold at 1%.

The RBA this month decided to keep the official cash rate on hold at 1%.

Macquarie has adjusted its thinking and now sees the likelihood of an interest rate cut in October rising, followed by another in November.

In Australia the mixed signals from economic data weighs more heavily to the downside, however in our view the RBA will wait for the second quarter GDP growth number, which is released after this month’s board meeting, before acting.

The RBA has downgraded its growth forecast to 2.5% but have maintained a 2020 growth rate forecast of 2.75%.

The resurgence in Sydney and Melbourne housing values was likely a key topic of conversation amongst the RBA Board at today’s meeting.

In line with rate cuts in June and July, housing values in Australia’s two largest cities have recorded a lift, with dwelling values rising 1.9% and 1.8% in Sydney and Melbourne over the past three months.

Clearly housing market conditions are responding to lower interest rates as well as the recent loosening of loan serviceability rules from APRA and the positive influence of the stable federal election outcome.

The recent step up in the pace of value growth is likely to raise some concern that the lowest mortgage rates since the 1950’s is fuelling renewed housing market exuberance at a time when household debt remains around record highs.

High levels of household debt are manageable while interest rates are very low, however if debt levels remain elevated when interest rates eventually rise, the risk is that households will need to dedicate more of their income towards servicing their debt and less towards spending.

The recovery trend is still very early and there is the potential for the pace of growth to slow as advertised stock levels rise in line with spring, but no doubt the RBA will be keeping a close eye on housing market conditions.

If the recent acceleration in housing value growth is sustained over coming months, we could potentially see additional credit policy levers pulled, aimed at keeping a lid on household debt.

Limiting lending to borrowers on high debt to income ratios could be one option, or introducing hard limits on high LVR lending could be another mechanism that would reduce the risk of a further build up in household debt whilst at the same time allow borrowers to access housing credit and take advantage such low interest rates.

At its meeting today, the Board decided to leave the cash rate unchanged at 1.00 per cent.

The outlook for the global economy remains reasonable, although the risks are tilted to the downside.

The trade and technology disputes are affecting international trade flows and investment as businesses scale back spending plans due to the increased uncertainty.

At the same time, in most advanced economies, unemployment rates are low and wages growth has picked up, although inflation remains low.

In China, the authorities have taken further steps to support the economy, while continuing to address risks in the financial system.

The persistent downside risks to the global economy combined with subdued inflation have led a number of central banks to reduce interest rates this year and further monetary easing is widely expected.

Long-term government bond yields have declined and are at record lows in many countries, including Australia.

Borrowing rates for both businesses and households are also at historically low levels. 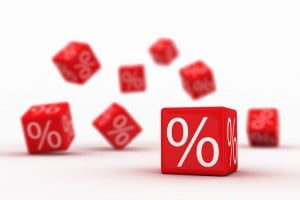 The Australian dollar is at its lowest level of recent times.

Economic growth in Australia over the first half of this year has been lower than earlier expected, with household consumption weighed down by a protracted period of low income growth and declining housing prices and turnover.

Looking forward, growth in Australia is expected to strengthen gradually to be around trend over the next couple of years.

The outlook is being supported by the low level of interest rates, recent tax cuts, ongoing spending on infrastructure, signs of stabilisation in some established housing markets and a brighter outlook for the resources sector.

The main domestic uncertainty continues to be the outlook for consumption, although a pick-up in growth in household disposable income and a stabilisation of the housing market are expected to support spending.

Employment has grown strongly over recent years and labour force participation is at a record high.

The unemployment rate has, however, remained steady at 5.2 per cent over recent months.

Wages growth remains subdued and there is little upward pressure at present, with strong labour demand being met by more supply. Caps on wages growth are also affecting public-sector pay outcomes across the country.

A further gradual lift in wages growth would be a welcome development.

Taken together, recent labour market outcomes suggest that the Australian economy can sustain lower rates of unemployment and underemployment.

Inflation pressures remain subdued and this is likely to be the case for some time yet.

There are further signs of a turnaround in established housing markets, especially in Sydney and Melbourne.

Demand for credit by investors continues to be subdued and credit conditions, especially for small and medium-sized businesses, remain tight.

Mortgage rates are at record lows and there is strong competition for borrowers of high credit quality.

It is reasonable to expect that an extended period of low interest rates will be required in Australia to make progress in reducing unemployment and achieve more assured progress towards the inflation target.

The Board will continue to monitor developments, including in the labour market, and ease monetary policy further if needed to support sustainable growth in the economy and the achievement of the inflation target over time.

Comments from the Finder.com.au RBA Survey

Which Australian capital city would be the best to invest $500,000 in property? 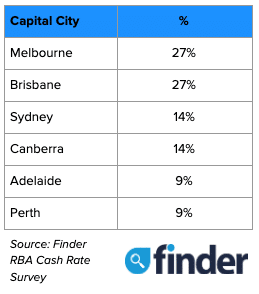 Experts surveyed have dropped their forecasted bottom of the cash rate – the number where they think the rate will not drop below – by more than 50 basis points to 0.57% on average.

The RBA has left cash rate on hold today at an historic low of 1 per cent.

Reserve Bank Governor Philip Lowe has indicated there will be a prolonged period of low rates and further cuts are still on the table.

While the cash rate has remained steady since July, more than 30 lenders have cut fixed rates, suggesting they are pricing in at least one more rate cut.

Right now, the average 3-year fixed rate for owner-occupiers paying principal and interest on RateCity.com.au is 3.51 per cent. A year ago today, it was 4.10 per cent.

That’s a difference of 59 basis points.

“There are now over 30 lenders offering fixed home loans below 3 per cent, with more set to follow as the expectations of another cut ramp up.”

“A lot of home owners that fixed their rate at 4 or 5 per cent will now probably feel like they’re missing out, even though it could have been a cracking deal at the time.

“Fixed rates are a contract, and if you break it, you’re likely to be liable for any loss that your bank incurs. Often, this fee can run into the thousands.

“That said, if you are unhappy with your rate, it never hurts to give your bank a call and see what can be done.

“At worst they’ll tell you what your break fees will be, and you can consider your options. At best, there’s a chance, albeit slim, that your bank will cut you some slack, especially if they want to keep you on their books,” she said.

If you have a fixed home loan – can you get out of it?

Things to consider before committing to a fixed rate mortgage

Some of the lowest home loan rates