The Reserve Bank of Australia has kept rates on hold at 1.5%.

The decision to leave the cash rate on hold today came as no surprise to those following our economy.

To better understand the decision, here’s some interesting expert commentary:

Speculation on the direction of interest rates is likely to continue as the RBA announced its decision to keep the official cash rate on hold at 1.5%.

A case for more stimulatory action by the RBA had been building with inflation consistently below 2% since 2016 reflecting weak wages growth, and more recently, a cooling housing market.

However, unemployment remains steady at around 5% with labour demand remaining favourable.

Last month, Macquarie forecasted that the RBA would cut rates twice this year and we maintain this view, expecting the RBA to take the cash rate to a historic low of just 1% in 2019.

The flat CPI reading for the March quarter wasn’t enough to drag interest rates lower, although the likelihood of a cash rate cut over coming months remains high.

While inflation remains below the RBA’s target range, labour markets generally remain relatively strong, supported by NSW and Vic, and the decline in housing values has lost some speed over recent months.

If the cash rate does move lower later this year, a reduction in mortgage rates would provide some support for housing demand, however we may not see quite as much stimulus for housing market conditions that we have seen after previous rate cuts.

Generally, housing sentiment remains low and borrower mortgage serviceability is still assessed based on mortgage rates of at least 7%.

Households who already have a mortgage, or prospective borrowers who are able to satisfy lender credit policies will be the winners if interest rates do fall later this year.

At its meeting today, the Board decided to leave the cash rate unchanged at 1.50 per cent.

The outlook for the global economy remains reasonable, although the risks are tilted to the downside.

Growth in international trade has declined and investment intentions have softened in a number of countries.

In China, the authorities have taken steps to support the economy, while addressing risks in the financial system.

In most advanced economies, inflation remains subdued, unemployment rates are low and wages growth has picked up.

Long-term bond yields are low, consistent with the subdued outlook for inflation, and equity markets have strengthened.

Some lending rates have declined recently, although the average mortgage rate paid is unchanged.

The Australian dollar is at the low end of its narrow range of recent times.

The central scenario is for the Australian economy to grow by around 2¾ per cent in 2019 and 2020.

This outlook is supported by increased investment in infrastructure and a pick-up in activity in the resources sector, partly in response to an increase in the prices of Australia’s exports.

The main domestic uncertainty continues to be the outlook for household consumption, which is being affected by a protracted period of low income growth and declining housing prices.

Some pick-up in growth in household disposable income is expected and this should support consumption.

There has been a significant increase in employment, the vacancy rate remains high and there are reports of skills shortages in some areas.

Despite these positive developments, there has been little further progress in reducing unemployment over the past six months.

The unemployment rate has been broadly steady at around 5 per cent over this time and is expected to remain around this level over the next year or so, before declining a little to 4¾ per cent in 2021.

The strong employment growth over the past year or so has led to some pick-up in wages growth, which is a welcome development.

Some further lift in wages growth is expected, although this is likely to be a gradual process.

The adjustment in established housing markets is continuing, after the earlier large run-up in prices in some cities.

Credit conditions for some borrowers have tightened over the past year or so.

Growth in credit extended to owner-occupiers has eased over the past year.

Mortgage rates remain low and there is strong competition for borrowers of high credit quality.

The inflation data for the March quarter were noticeably lower than expected and suggest subdued inflationary pressures across much of the economy.

Over the year, inflation was 1.3 per cent and, in underlying terms, was 1.6 per cent.

Lower housing-related costs and a range of policy decisions affecting administered prices both contributed to this outcome.

Looking forward, inflation is expected to pick up, but to do so only gradually.

The central scenario is for underlying inflation to be 1¾ per cent this year, 2 per cent in 2020 and a little higher after that.

In headline terms, inflation is expected to be around 2 per cent this year, boosted by the recent increase in petrol prices.

The Board judged that it was appropriate to hold the stance of policy unchanged at this meeting.

In doing so, it recognised that there was still spare capacity in the economy and that a further improvement in the labour market was likely to be needed for inflation to be consistent with the target.

Given this assessment, the Board will be paying close attention to developments in the labour market at its upcoming meetings.

Comments from the Finder.com.au | Cash rate in limbo – but not for long

In the latest Finder RBA Cash Rate Survey™ – the largest of its kind in Australia – 40 experts and economists made their predictions, with 75% (30/40) correctly forecasting a hold of the cash rate. 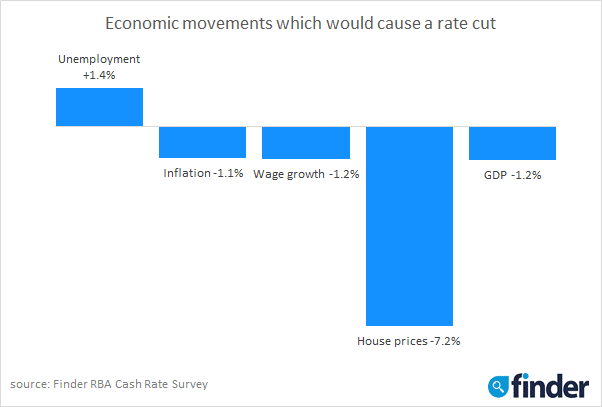