The Reserve Bank of Australia has cut interest rates for the first time in almost three years at its June board meeting.

This ends Australia’s longest period of steady monetary policy, with rates remaining on hold at every meeting since August 2016. 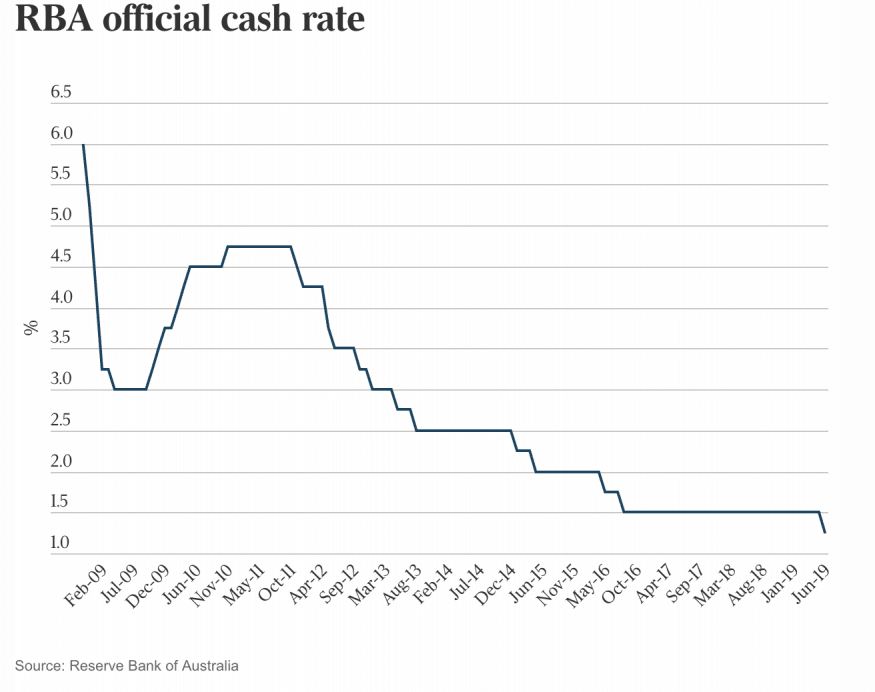 An interest rate cut was all but ensured by the RBA Governor Phillip Lowe when he spoke at the Economic Society of Australia in Brisbane last month, noting the RBA board was considering the case for lower interest rates.

In May, the RBA board discussed a scenario in which there was no further improvement in the labour market and the unemployment rate remained around the 5% mark. In this scenario, they judged that inflation was likely to remain low relative to the target of 2-3% and that a decrease in the cash rate would likely be appropriate.

The move by the RBA to cut rates was widely expected, and no doubt the focus will now turn to mortgage rates; how low will they go?

Mortgage rates for owner occupiers are already around the lowest level since the 1960’s and lenders are generally expected to pass on most, if not all of the cash rate cut to mortgage interest rates.

Lower mortgage rates, together with the likelihood of lower borrower serviceability assessments if APRA delivers on a relaxation to the base serviceability rate later this month, as well as renewed confidence following the federal election, are likely to see an improvement in housing market activity.

However, with credit policies remaining tight, the stimulus of lower rates isn’t likely to be as effective in kick starting the housing market as what we have seen in the past.

Borrowers are facing much closer scrutiny on their income and expenses as lenders become less reliant on HEM (Household Expenditure Measure) benchmarks, and comprehensive credit reporting is providing lenders with greater transparency around borrower debt levels and credit standing.

Overall, the latest rate cuts together with lower serviceability assessments for borrowers and greater confidence following the federal election should help to support an earlier than expected trough in housing values, but we aren’t expecting a rapid reversal in house price declines due to ongoing tight credit policies and, more broadly, economic uncertainty as global trade tensions escalate.

At its meeting today, the Board decided to lower the cash rate by 25 basis points to 1.25 per cent.

The Board took this decision to support employment growth and provide greater confidence that inflation will be consistent with the medium-term target.

The outlook for the global economy remains reasonable, although the downside risks stemming from the trade disputes have increased.

Growth in international trade remains weak and the increased uncertainty is affecting investment intentions in a number of countries.

In China, the authorities have taken steps to support the economy, while addressing risks in the financial system.

In most advanced economies, inflation remains subdued, unemployment rates are low and wages growth has picked up.

In Australia, long-term bond yields are at historically low levels.

The Australian dollar has depreciated a little over the past few months and is at the low end of its narrow range of recent times.

The central scenario remains for the Australian economy to grow by around 2¾ per cent in 2019 and 2020.

This outlook is supported by increased investment in infrastructure and a pick-up in activity in the resources sector, partly in response to an increase in the prices of Australia’s exports.

The main domestic uncertainty continues to be the outlook for household consumption, which is being affected by a protracted period of low income growth and declining housing prices.

Some pick-up in growth in household disposable income is expected and this should support consumption.

Employment growth has been strong over the past year, labour force participation has been increasing, the vacancy rate remains high and there are reports of skills shortages in some areas.

Despite these developments, there has been little further inroads into the spare capacity in the labour market of late.

The unemployment rate had been steady at around 5 per cent for some months, but ticked up to 5.2 per cent in April.

The strong employment growth over the past year or so has led to a pick-up in wages growth in the private sector, although overall wages growth remains low.

A further gradual lift in wages growth is expected and this would be a welcome development.

Taken together, these labour market outcomes suggest that the Australian economy can sustain a lower rate of unemployment.

The recent inflation outcomes have been lower than expected and suggest subdued inflationary pressures across much of the economy.

Inflation is still however anticipated to pick up, and will be boosted in the June quarter by increases in petrol prices.

The central scenario remains for underlying inflation to be 1¾ per cent this year, 2 per cent in 2020 and a little higher after that.

The adjustment in established housing markets is continuing, after the earlier large run-up in prices in some cities.

Conditions remain soft, although in some markets the rate of price decline has slowed and auction clearance rates have increased.

Credit conditions have been tightened and the demand for credit by investors has been subdued for some time.

Mortgage rates remain low and there is strong competition for borrowers of high credit quality.

Today’s decision to lower the cash rate will help make further inroads into the spare capacity in the economy.

It will assist with faster progress in reducing unemployment and achieve more assured progress towards the inflation target.

The Board will continue to monitor developments in the labour market closely and adjust monetary policy to support sustainable growth in the economy and the achievement of the inflation target over time.

Comments from the Finder.com.au | New low puts borrowers on a $21,000 high

Potential savings based on mortgage sizes 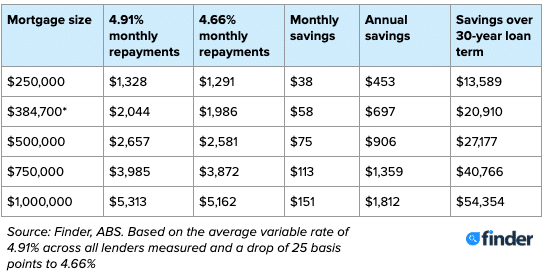