The CoreLogic September home value index results saw the national index post the largest monthly gain since March 2017, largely driven by a strong rebound in Sydney and Melbourne property markets where values were up 1.7% over the month. 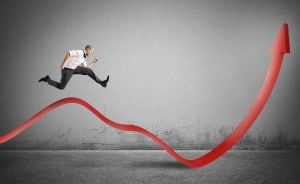 The housing market has made further progress towards a recovery, with CoreLogic’s national home value index recording the third consecutive month of gains, lifting the national value of housing by a cumulative 1.7% since the market found a floor in May 2019.

The month-on-month lift of 0.9% in national housing values was the largest monthly gain since March 2017. Although housing values are now consistently tracking higher, at least at a macro-level, the national index remains 6.8% below the October 2017 peak, indicating that buyers still have some time to take advantage of improved housing affordability before values return to record highs.

The September gains were once again driven by stronger conditions emanating from Sydney and Melbourne where dwelling values increased by 1.7% over the month; Australia’s two largest cities have seen a rapid bounce-back in  home values  over the past two months, with Sydney up a cumulative 3.3% and Melbourne up 3.2% in August and September.

Most of the regional markets recorded a rise in September, with regional SA (-0.5%) and regional WA (-1.3%) the only ‘rest of state’ areas to record a drop in values.

Why is this surge?

The strong rebound in Sydney and Melbourne housing markets relative to other regions, can be attributed to a variety of factors.

While all regions are benefitting from low mortgage rates and improved access to credit, economic and demographic conditions in New South Wales and Victoria continue to outperform most  areas of the country.

Population growth is higher, unemployment is lower and jobs  growth is stronger, providing a solid platform for housing demand. 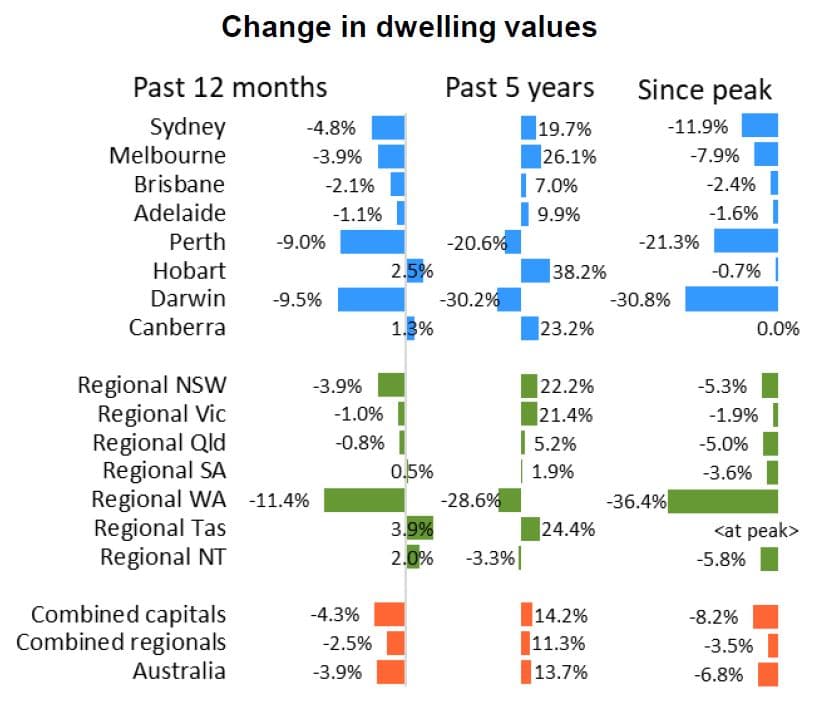 Another factor cited as driving the strength in Sydney and Melbourne property markets could be higher levels of investor participation.

The latest housing finance data from the ABS (to end of July) shows investors comprised 32% of mortgage demand across New South Wales and 26% of Victorian mortgage demand which is higher relative to any of the states or territories.

Although markets outside of Sydney  and  Melbourne aren’t showing the same recovery trend, most areas have either seen a reduction in the rate of decline or are seeing a modest trajectory of growth as low mortgage rates and a slight loosening in credit policy support buyer demand.

CoreLogic’s stratified hedonic index shows that each of the broader valuation cohorts are on a recovery trend, however it’s the most expensive quarter of the market where  values  are rising the fastest.

The top quartile of capital city housing values recorded a 3.6% gain over the September  quarter  compared with a 1.4% rise across the broad middle of the market while conditions were flat across the lower quartile. 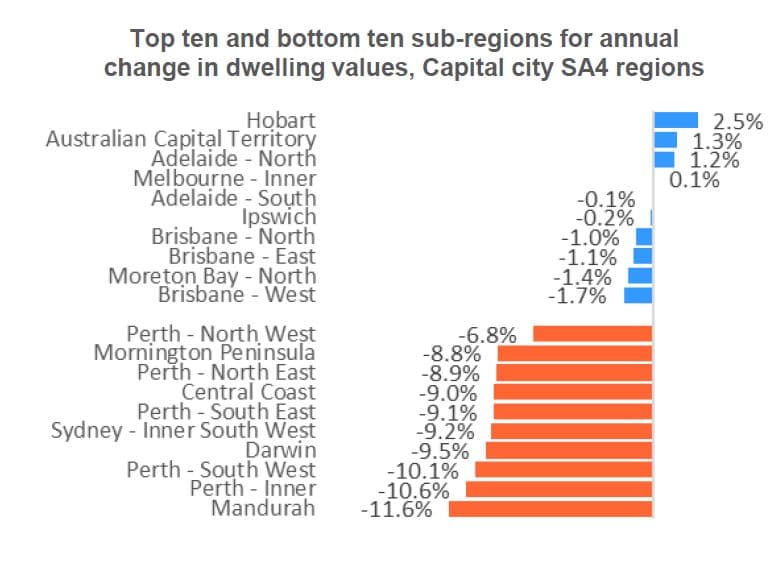 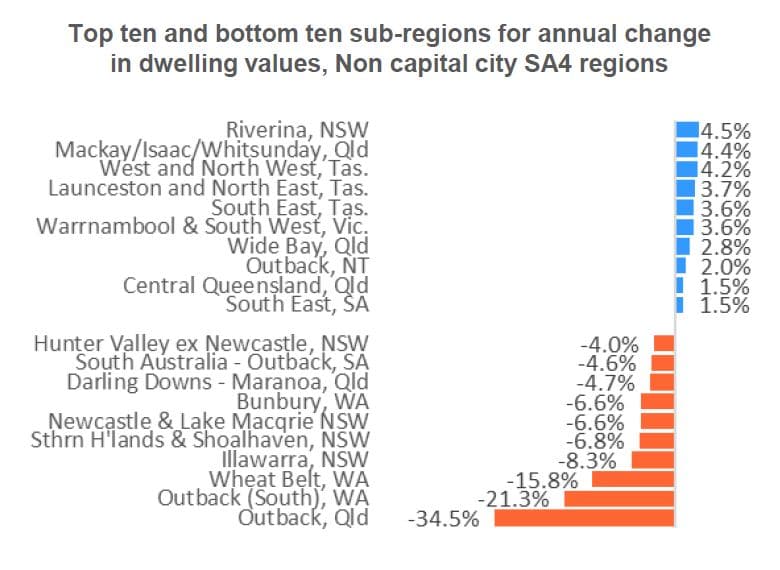 It’s starting at the top.

Across the product types, the prestige end of the unit sector has seen the highest capital gain over the quarter, with values up 3.8% compared with a 3.6% rise across the top quartile for houses.

The rapid recovery across higher valued properties makes sense considering this sector of the market recorded a more substantial correction.

Additionally, borrowing capacities have recently increased following the relaxation of serviceability rules from APRA which may be stoking demand across higher price points.

While only four of the forty-six capital city sub-regions have recorded a rise in housing values over  the twelve months ending September, the latest quarter has seen a substantial turn around in areas where values are now rising.

Thirty three of the capital city sub-regions recorded a rise in values over the quarter, led by Melbourne’s prestigious Inner East where values were up 5.9%  and Sydney’s Inner West with a 5.2% gain.

These areas were also amongst the markets that recorded the largest correction during the market downturn; despite the recent upwards pressure on prices, values remain more than 10% below their 2017 peaks.

Four of the top five weakest capital city sub-regions over the September quarter were located in Perth; Mandurah recorded a 3.9% drop in housing values, taking the  cumulative  decline  across this sub-region to -37.4% since peaking in December 2006.

Perth’s South West (-2.9%) and North East (-2.5%) recorded the second and third largest declines in dwelling values over the September quarter.

The regional sub-markets have generally shown better resilience to falling prices relative to the capitals.

Across the forty-two sub- regions outside of the capital cities, seventeen regions recorded a rise, or stable conditions over the twelve months ending September 2019.

The Riverina region of NSW led the annual capital gains with a 4.5% gain, however values have started to slip lower across this market, down 1.9% over the past three months.

The Mackay/Isaac/Whitsunday region was the second best performing regional area, with values up 4.4% over the past twelve months, although home values remain almost 25% below their 2012 peak.

The quarterly results weren’t quite as strong, with thirteen of the forty- two sub-regions recording a gain in values over the September  quarter.

There is evidence that  many of  the largest regional centres are starting to recover with Geelong (+1.3%), Illawarra (+1.0%) and Newcastle / Lake  Macquarie (+0.5%) all recording a rise in value over the September quarter.

Some of the iconic coastal markets are also moving back into growth territory with values up across the Gold Coast (+1.0%), Sunshine  Coast (+0.9%) and Richmond Tweed (+0.4%) over the quarter. 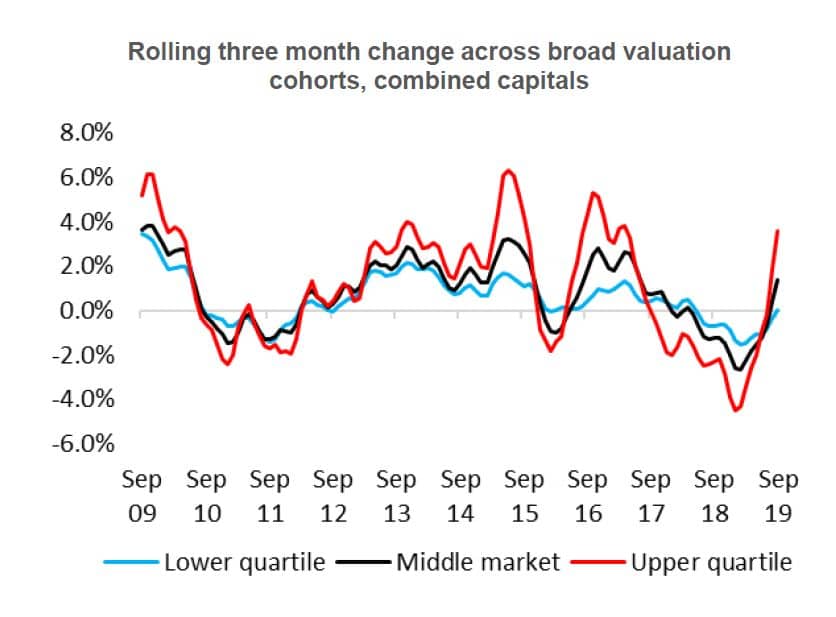 Nationally rents trended lower for the fourth straight month, down 0.1% over the month and  0.3%  lower  over the September quarter.

The weak trend in the performance of the rental market against rising home values has seen the recovery in rental yields take a U-turn.

Gross rental yields are generally still higher relative to a year ago across most regions, but are trending lower across most areas, with the most rapid yield compression in Sydney (3.2%) and Melbourne (3.5%).

Although yields are trending lower, landlords are receiving a better rental return than they were when capital city gross yields reached a record low of  3.4% as values peaked in 2017.

Despite lower rental yields, with mortgage rates low and likely trending lower, the yield on residential property is looking increasingly attractive, especially when factoring in the total return which includes capital gain.

Fixed rate mortgage rates are generally around the 3.8% mark which is roughly equivalent to the gross rental  yield across the  combined capitals.

The improving prospects for capital gains and narrow spread between  mortgage rates  and rental  yields is likely to see the housing market become increasingly attractive to investors. 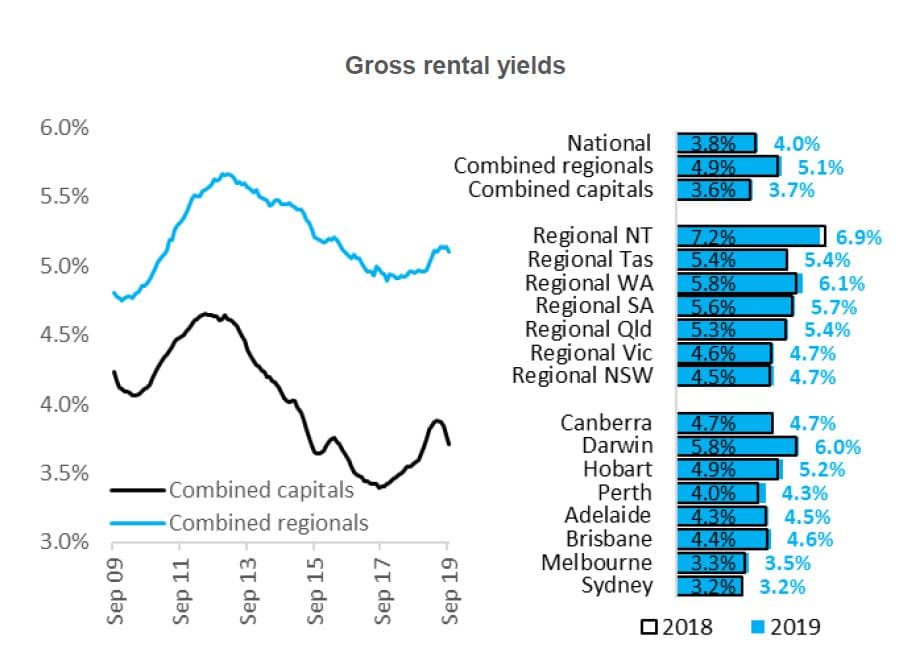 The September housing market results provide further confirmation the housing market recovery is in full swing across Sydney and Melbourne while the remaining  capital  city and regional areas are showing a mixed result.

Low mortgage rates, and the expectation that they will move lower, along with better affordability, a loosening  in  credit rules and improved housing sentiment, are all factors contributing to the rebound.

Strong economic and demographic  conditions  in  Sydney and Melbourne help to explain the over performance in these markets despite housing affordability challenges in these areas.

A variety of other indicators outside of our hedonic index are pointing towards further strength in the housing market, including auction clearance rates which are continuing to track around the mid-to-high 70% range, with the results remaining high on larger volumes.

The  correlation between the auction success rate and housing values is holding true, with the strength in auction markets providing a timely insight into the fit between buyer and seller pricing expectations.

The number of properties for sale is lower

Amidst a rise in buyer activity advertised stock levels are lower which is creating some urgency amongst buyers.

As buyer activity rises, the lack of available stock could see a renewed sense of FOMO supporting further price growth.

Although ABS data is only current to July, the number of mortgage related valuation events  across CoreLogic platforms has been trending consistently higher, implying a further lift in housing credit through August and September.

Policy makers and regulators appear to be comfortable with the housing rebound to date.

Potentially improved housing values and activity will help to boost consumer attitudes and fuel spending as well as ease the  downturn in residential construction activity.

However, household debt levels reached new record highs relative to  their  incomes over the June quarter, suggesting the sector is vulnerable to a shock or change in household circumstances.