Don’t believe the hogwash that came out of another reporting body over the weekend.

The Sydney property market is not about to slow, its actually about to have the strongest start yet in over 15 years.

Let me tell you why we remain so bullish on Sydney –
1. Stock on market in Sydney fell to the lowest levels recorded on our index in December.

For the month, there were just 20,479 properties listed in Sydney. That was less than half the amount that’s listed in Melbourne and just 75% of what is listed in Brisbane.

2. N.S.W Housing finance approvals, which are predominantly driven by Sydney kept rising through to the end of last year as measured by the ABS.

Certainly no indicators there that Investors were slowing down.

3. The outlook for interest rates has changed

The market is no longer factoring in possible interest rate rise for this year. Indeed, the probabilities of another rate cut have increased.

This will help investor confidence immensely.

4. The Australian dollar continues to slide.

This will help the Sydney’s finance, manufacturing and exports sectors.

Perhaps there is some evidence this maybe the case, with N.S.W now recording the second lowest unemployment rate across the country and some evidence that N.S.W businesses are becoming more confident.

You can read about it in the Sydney Morning Herald here –

5. Sydney has been far more overvalued before.

Consider Sydney house prices to nominal GDP, which is something we follow very closely.

Even after the rises of 2013, the premium in Sydney is still below the 25 year average premium and way below the point reached in 2003 – 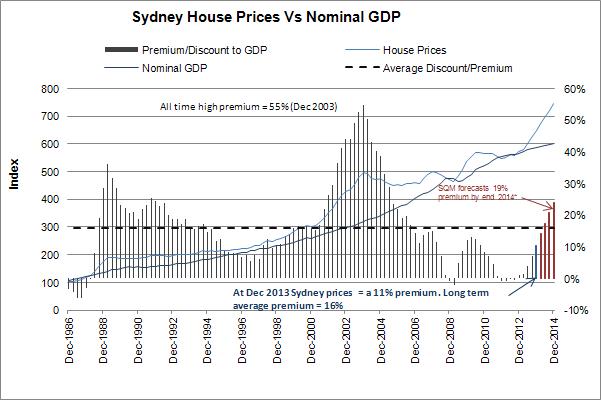 Though in all this, the one indicator to keep an eye out for on the Sydney market is this:

A solid rise in NSW building approvals which will likely keep rising over 2014. 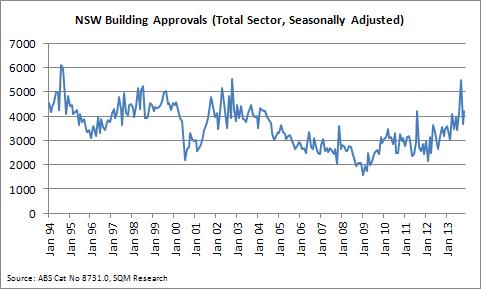 Once we get a regular reading of over 5,000 a month it will mean the market is building at a rate faster than underlying demand.

Now remember that it can take18 months (or longer!) between a building approval and final completion.

So I don’t see an oversupply issue in Sydney for 2014. But perhaps for 2015/2016? We will be watching this closely throughout the year.

Whatever you may think of the Sydney market, whether it is overvalued or deeply overvalued, the point remains that the market is momentum driven.

Just like with the listed shares or any other asset classes for that matter, property prices are never too high to go even higher, nor are they never too low to go even lower.
Bullish momentum is running with the Sydney housing market right now and there are no signs yet that the momentum is about to exhaust itself or get scared off.

Next week, I’ll provide an update on the mining towns with a break up of vacancy rates for 70 of these towns. Should be fun!”