It’s estimated that Aussies will rack up over $28 billion on credit cards in December.

And credit card providers are making it more attractive to do so.

Over 9.2 million Australians are planning to hit the shops next month alone 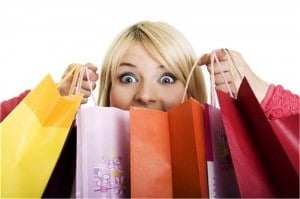 Shoppers are being urged by credit card comparison website creditcardfinder.com.au to check out the latest credit card deals before hitting the shops.

With more than $28 billion expected to be spent on plastic in December alone – $648 million more than last December – credit card providers have ramped up their promotions in time for the biggest spending season of the year.

According to creditcardfinder.com.au, 44 cards are offering no interest for up to 15 months on purchases.

Of these 44 cards, five cards are offering 0% for 15 months and one of which has no annual fee – Coles No Annual Fee MasterCard.

Bessie Hassan, Consumer Advocate at creditcardfinder.com.au, says shoppers should take advantage of these credit card promotions but watch the budget.

“We’ve never seen so many of these 0 percent deals, which shows that credit card providers are being more competitive than ever before in an attempt to win over new customers.

“For instance, this time last year, there were 33 cards in the creditcardfinder.com.au database offering a promotional period for new purchases and out of those, just 20 were for no interest – just two were offering 0% for 15 months.

“It’s a great time to take advantage of these deals before you spend up on your cards. But shoppers need to remember that no interest for a period of time doesn’t mean a free ticket to blow your budget.”

“If you spend $2,000 on Christmas this year, put it on your credit card with an average  purchase rate of 17 percent, and planned to pay it off over the next 12 months, you could save about $144 in interest by using a card with no interest on new purchases,” says Mrs Hassan.

“There is still time to plan your Christmas shopping wisely. Most cards will give you immediate approval after applying online and send you the card within two weeks.

Jump online and compare credit cards before you start your shopping and you could save a small fortune.”

Will low interest rates be a property market lifeline?