It was recently the 50th anniversary of classic sci-fi franchise Star Trek.

In the original show (and various movie tie-ins), the intrepid crew of the Enterprise boldly goes where no one has gone before, exploring the far reaches of the galaxy.

But could it be that Captain Kirk spent so much time in space because he simply couldn’t afford to live on Earth anymore?

In the world of Star Trek, Kirk lived in San Francisco – where Starfleet was headquartered – when he wasn’t off on a five-year mission.

With San Francisco home prices already in the stratosphere, would Kirk do any better moving to Sydney?

The yourmortgage.com.au team thought we’d crunch the numbers and find out.

The current median home price in San Francisco is about US$1.1 million, according to Zillow.

Sydney’s home prices are slightly better right now – about $1.02 million, according to Domain.

But it’s got a higher appreciation rate – about 13.1% year over year in June, according to Your Investment Property.

So let’s assume a worst-case scenario for James T. Kirk, homebuyer – the Kobayashi Maru of homebuying, if you will.

That means no major housing collapses, economic meltdowns or other catastrophes between now and then.

We’re going to assume Sydney homes are going to keep increasing in value by 13.1% every year between now and then.

Captain Kirk should be leaving for his mission about 250 years from now: in 2266.

Let’s further assume that he purchased a home with a middle-of-the-road price – about $1.02 million in 2016 Sydney.

So what’s the damage?

If prices keep appreciating at 13.1%, an average home there would set Kirk back by … well, let’s just say it’s more money than is currently in circulation on the entire planet.

Many, many times more.

So what would a mortgage on that cost?

Again, yourmortgage.com.au has crunched the numbers for you – and he might need a payrise. 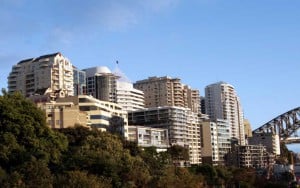 Kirk would be looking at a monthly payment of $603.8 quadrillion.

And with the interest on the mortgage, his modest home would end up costing him $217 quintillion.

All things considered, Captain Kirk might be better off moving back to his home state of Iowa, where the average home would only set him back by US$85 million in 2280.

At any event, now we may know why Kirk was so famously irate when Khan trapped him on the Genesis planet – he may have been worried about missing his mortgage payment.

Whether you are looking to buy your first home, move home, refinance, or invest in property, a mortgage broker can help.

Access loans from all the major lenders, get help with paperwork – plus there is no charge for this service.

'Could Captain Kirk afford to live in Sydney?' have no comments