The latest Westpac-Melbourne Institute survey shows consumer sentiment rose by a solid 4.7% in September to be 12.7% higher than a year ago.

In fact, sentiment is at its highest level since December 2010.

Sentiment was buoyed by the election outcome as well as low interest rates, rising asset prices and the appreciating Australian Dollar. 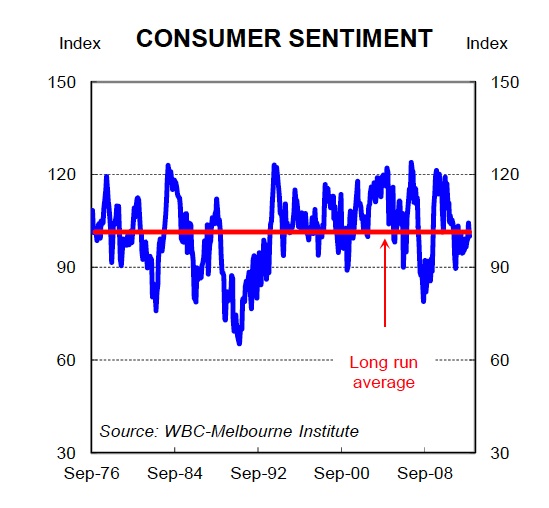 Gareth Aird, economist at the Commonwealth Bank made  the following commentary:

The Westpac‑Melbourne Institute Index of Consumer Sentiment rose by a solid 4.7% in September. The lift in sentiment took the index to 110.6, its highest reading for almost three years. A level above 100 means that the number of optimists outweighs the number of pessimists. Sentiment is now 12.7% higher than it was a year ago.

The key driver of the lift in sentiment over the month was the federal election. The survey was conducted over a period that covered both before and after the election (2nd– 8th September). But polls and media coverage before the election pointed heavily towards a coalition victory.

Consumers like certainty. And an election outcome eliminates the uncertainty around who will govern the country. The election also marked the end of a protracted and tiresome campaign, which effectively began in January when Julia Gillard called for an election in September.

The election outcome wasn’t the only thing that contributed to a strong consumer sentiment reading.

The cash rate is at a record low. And a low cash rate means low mortgage rates. For borrowers, this means lower monthly mortgage repayments, the ability to repay debt quicker or cheaper new debt.

The double‑edged sword of low interest rates means that savers lose out. But the pain to savers of low nominal returns on cash is mitigated, to an extent, by low inflation.

Asset prices, and in particular house prices, have been trending higher over recent months. This is welcomed by home owners. Rising house prices improve confidence by strengthening household balance sheets through a lift in net worth.

Also contributing to such a positive result was the recent rally in the AUD.

Consumers perceive a lift in the local currency as a sign of economic strength. So the appreciation of the AUD had a positive impact on consumers.

This was best evidenced in the changes in the five components of the headline index.

All up, a very good outcome today and one that will please policy makers.