By now you probably know I like to track consumer confidence because it is a good forward indicator of property trends.

Strong consumer confidence leads to more people buying property and the opposite is of course also true.

Confidence has been trending above its long run average for two continuous weeks, following a five month run of below average growth – see below: 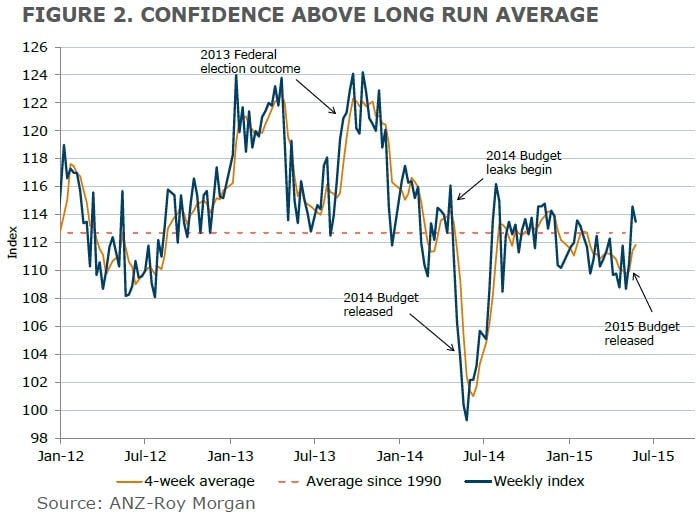 Confidence remains well above levels this time last year (14.3%), following the release of the 2014 Commonwealth Budget.

Consumers continue to remain more concerned about economic conditions which are around 7% below their long run average.
In particular, consumers’ views towards ‘economic conditions in the next 12 months’ fell 5.3%, offsetting only around half the rise in the previous week.
By contrast, households views towards their finances remain above average with views about finances in the next 12 months up 2.7% last week.

“The fall of 1.0% in ANZ-Roy Morgan Consumer Confidence last week only slightly reverses the lift seen in the previous two weeks.

Confidence now appears to be trending higher following the government’s Budget. In level terms it is hovering just above its long term average.

The response to the Budget this year has been much more positive than last year, and confidence now stands around 14% higher than levels recorded a year ago.

While consumers have reacted more positively towards the government’s 2015-16 Budget, the sustainability of this lift in confidence, and indeed, the prospects for further gains in confidence will be reliant on a number of factors.

The lift in confidence is unlikely to be sustained if key measures do not pass through the parliament.

As a key driver of employment, the outlook for business investment is now one of the main factors influencing consumer confidence in Australia.

In this regard, we keenly await Thursday’s CAPEX numbers, including the survey of capex expectations.”