Uncertainty regarding China has been a factor behind global growth worries and share market volatility since mid last year.

Put simply the combination of a reversal of gains in Chinese shares, a fall in the Renminbi and uncertainty about the intentions of Chinese policy makers at a time of slowing Chinese growth have fanned fears China was heading for the “hard landing” that China bears have long predicted.

The hard landing story for China has been around for as long as I have been analysing it and I suspect at the core of the China bears’ beliefs in it is scepticism that a so-called “communist” country can do well.

But while Chinese growth has slowed the hard landing is yet to eventuate.

This note looks at the main issues.

Five key themes of relevance to China at present

There are five key themes of relevance to China at present:

This is the long talked about rebalancing of the Chinese economy. As can be seen in the next chart the rising importance of the services sector started 20 years ago at the expense of primary production. Since 2010 it has come at the expense of manufacturing. 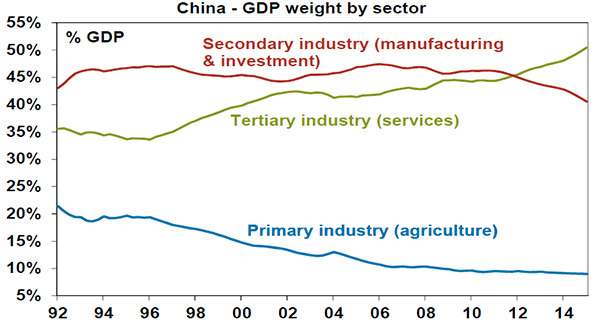 Hence the focus on combating corruption & pollution, boosting growth in inland provinces, trying to wind back industries with excess capacity and the incremental approach to economic stimulus as opposed to the 4 trillion Renminbi GFC stimulus.

Thanks to the one child policy China’s working age population is now falling and the proportion of people aged 65 and over is rapidly rising.

While there is now a two child policy it’s doubtful urban couples will want two children as attitudes have changed.

This all means that China’s potential growth rate is slowing and more dependent on continued urbanisation (which at 56% is still low) and productivity.

The Chinese Government is clearly aware of the “middle income trap” which has set in for many South American and some Asian countries where after an initial phase of rapid industrialisation, strong wage growth and slowing productivity see them trapped as middle income countries.

It wants to avoid it by economic reform to boost productivity and move into higher value add production.

Critical on this front are rural reform to remove subsidies, reforming state owned enterprises, financial sector reform, “Hukou” reform to make it easier for people to move around the country and welfare/tax reform.

Progress on these has been mixed.

However, at the same time the Chinese Government has little tolerance for social unrest that would flow from job losses that would occur if growth slows too quickly.

So the reform process can often look like two steps forward and one step back when it looks like “free market forces” risk threatening economic growth.

Recent examples of this include the intervention to support the share market and using foreign exchange reserves to prevent a sharper fall in the value of the Renminbi.

More broadly, the focus has now swung back towards providing stimulus to help support growth.

Since November 2014 there have been six interest rate cuts and the budget deficit is targeted to rise to 3% of GDP this year. 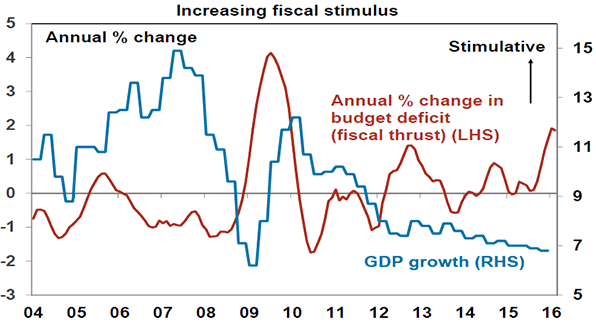 There are a number of implications that flow from all of this.

First, China won’t be the source of growth in commodity demand it once was with the focus shifting to services.

This is where the big opportunities in China will be going forward.

Second, old guides to growth in China – such as industrial production and electricity consumption (what some China bears focus on to support their hard landing thesis) are less relevant as services become the focus.

Third, the steep learning curve associated with deregulation will sometimes lead to uncertainty – as seen with the share market and Renminbi in the last year.

Bear in mind though that western countries went through a similar steep learning curve when they were deregulating in the 1980s at a time when their economies were more developed than China is today.

Fourth it is reasonable to expect growth to step down over time, but it should still remain okay.

In terms of the latter, Chinese data has yet again started the year on a soft note with softish readings for PMIs, trade, retail sales and industrial production. However, this data needs to be treated with caution due to the distortions caused by the timing of China’s Lunar New Year holiday.

More importantly stimulus is evident in stronger credit growth and some stabilisation in fixed asset investment.

Our assessment is that growth will slow this year to around 6.5% which is not out of line with the Government’s target.

Low non-food inflation of around 1% and slowing capital outflows as investors get confident with the PBOC’s management of the Renminbi against a basket of currencies are consistent with there being further scope for monetary easing.

There are two key threats: property and debt. 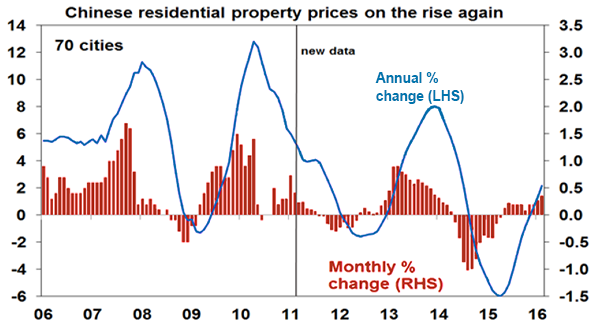 However, it’s worth noting that while property remains oversupplied in some cities this is not the case in first tier cities (Beijing, Shanghai, etc), household debt remains low at around 38% of GDP and it’s likely that renewed policies will be put in place in relevant cities to keep gains calm. 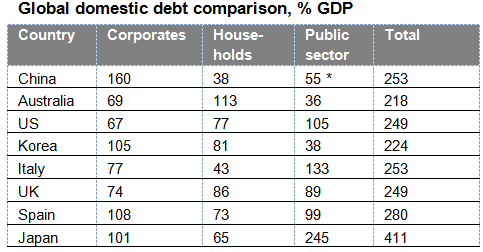 However, Chinese officials recognise the problem and there are some offsets that may make China’s debt accumulation less dangerous than it appears.

First, strong growth in debt reflects China’s 46% savings rate with savings mainly being recycled via the banks and hence as debt. 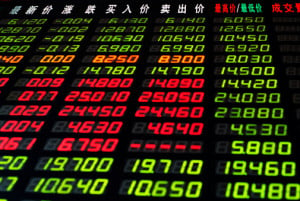 The solution is to reduce savings over time and channel more of that saving into equities rather than through banks as debt.

This of course requires ongoing development of China’s share market to make it more stable and attractive to investors and this will take time.

Lowering lending without first doing this will just risk recession and deflation.

Second, China is only borrowing from itself not from foreigners so it’s a long way from the sort of problems that go with foreign debt.

Third, problems associated with excessive local government borrowing appear to be being resolved by allowing such debt to be swapped into bonds, which will entail much reduced borrowing costs and longer maturities.

Finally, given heavy state ownership corporate debt partly reflects an element of fiscal policy and would be subject to Government support in the event of a problem.

Our assessment remains that these risks are manageable.

Much of what goes on in China is controlled by the Government and it has plenty of firepower to ensure growth holds up.

Chinese shares have been on a bit of a roller coaster over the last few years, with the Shanghai composite rising 163% from its 2013 low to last June’s high before falling 49% to its recent low.

While the volatility is unnerving, it is very hard to argue Chinese shares are expensive.

In fact H shares are very cheap across most valuation indicators and across most sectors.

While it may take a while for the dust to settle after the volatility of the last year in terms of the impact on investor confidence in Chinese shares, they should provide good medium term returns if we are right and Chinese growth remains solid.

'China in transition from manufacturing to services' have no comments