In a moment I’ll analyse why, but first…

As summer approaches and the weather warms up, we quickly put the wet days of winter behind us and during those hazy January days may even forget all about the cold weather that we experienced only a few months earlier.

In the same way, Sydney’s recent high price growth may cause us to forget that Sydney’s percentage price growth over the past twelve years as shown in our graph has actually been the lowest of all our capital cities.

Sydney is not really a star performer

Far from being a star performer, the Sydney house market has been sluggish at best for most of the last decade and its recent housing price push is an exception, not the rule.

In fact, from 2003 to 2009 there was virtually no price growth in the harbour city and little in New South Wales overall, while other states each took a turn in the lead. 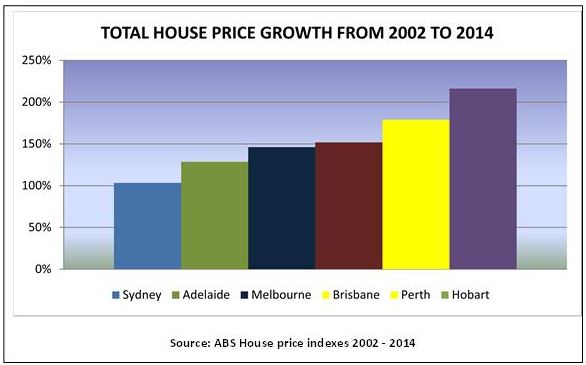 Each State has its time in the sun

The graph below shows that each state has been the price growth leader in one year from 2002 until 2010, and what is most interesting is not so much that the lead has changed each year, but that each state and territory has had its own time in the sun as the best performer. 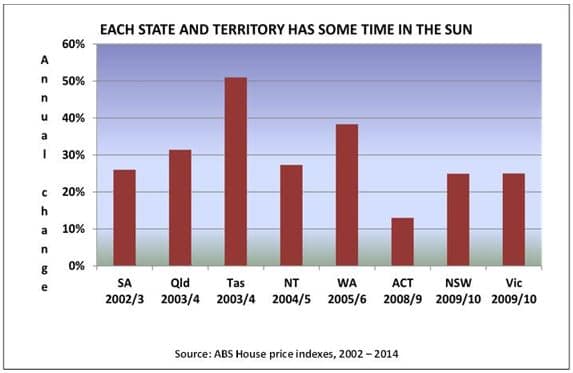 One of the reasons that this occurs is the tremendous diversity of the Australian economy, which affects each state in different ways at different times, causing housing markets to boom or decline in the process.

Why the change each year?

In order to understand this process it is essential not to overestimate the effect of mining booms or droughts on our housing markets.

Primary industries such as mining, agriculture, fishing and forestry generate less than 10% of our economic production, while the services sector makes up a huge 70% and manufacturing the remaining 20%.

This why growth or decline in the financial and business services sector has a direct effect on the Sydney housing market, while manufacturing’s fortunes impact Melbourne and Adelaide’s housing markets.

Because primary industries tend to be situated in rural and regional areas their growth or decline has an effect on housing markets where they are situated.

For example, the millennium drought had severe repercussions on housing markets in the Riverland in South Australia, Riverina in NSW and Sunraysia in Victoria, as well as other regional centres in Queensland and Western Australia.

The end of the mining boom has caused corrections in the housing markets of the Pilbara in northern Western Australia, the Hunter Region of NSW, the Bowen and Surat Basins in Queensland and to a lesser extent, the ports that serve these towns.

But while droughts, recoveries, mining booms and busts have easily observed effects on local housing markets, what happens in the capital cities?

Sydney is very much the financial and business services engine room of Australia, so when the housing market is thriving, Sydney’s housing market tends to boom as well.

Melbourne’s economy relies on domestic goods and services production and the economy booms when overseas immigration is high, lifting demand for these products and services and flowing into greater housing demand.

Queensland’s economy is dependent on infrastructure development and tourism, particularly overseas tourism and the housing market does well when these industries are thriving.

South Australia relies on heavy manufacturing and the economy is currently suffering from overseas competition in this market, with direct implications for parts of Adelaide’s housing market.

Western Australia has the highest population growth rate of all states and in addition, when the mining industry is booming it has an indirect effect on Perth’s housing market as building and construction workers down tools and head north to the Pilbara ports and mines, leading to housing shortages.

Although population growth and access to affordable finance remain the key demand dynamics for any housing market, it is obvious from the stats that when the main driver of economic growth in any state is thriving it has a positive effect on the housing market of its capital city as well.

Tasmania’s economy relies on the processing of primary products such as ores and timber.

When these industries are in decline, younger people move to the mainland where there are plentiful educational, employment and recreational opportunities and the housing market suffers as a result.

This is why we are so fortunate that Australia is not only widely divergent in geography and climate but also in terms of its industries.

For housing investors this means it pays to look well beyond your own state, because there are always suburbs and towns about to boom somewhere.