They said it would never happen there…

All property booms come to an end and some with more of a bust than others.

It seems some interesting things are happening in China

WA Today report that China’s property developers are so desperate to sell new apartments  they are offering ridiculous gimmicks and fat incentives.

In one case, a developer in the city of Nanning offered 1000 live chickens to people who turned up at an opening.

“Within 15 minutes all that was left of the promotion were piles of chicken feathers and a few lost shoes.”

“Mayhem ensued when the developer let the chickens loose and eager locals scrambled to grab as many as possible.”

But in the event there were more people than chickens, but not more buyers, as locals moved in to get a free meal.

Buy One, Get Two Free

In the south-western city of Kunming, host to one of China’s famous “ghost towns” of row upon row of new, empty apartments, some developers are offering “buy one floor, get two floors free” deals, according to WA Today.

And then there are the buyback offers

In the city of Hangzhou, Shanheng Real Estate is giving home buyers an option to sell back their apartments in five years for 40 per cent above the purchase price, the China Daily reports.

Of course this is more a sign of the developer’s desperation than their confidence in future price rises.

Price of Property is Falling

The property sector is the biggest industry in China, and China has been the biggest source of growth in the world economy.

But the average price of new homes in China fell in November for the seventh consecutive month, according to the firm China Real Estate Index System. Of 100 cities surveyed, prices fell in 76. 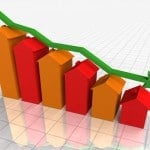 The government is trying to prop the market up. It has eased mortgage restrictions and cut official interest rates.

And China boosters still rush to assert that all will be well, that the country’s unique features will sustain the real estate market for many years to come.

This is always the way with every vast real estate or sharemarket boom in history.

There is always a factor that makes this boom different. It will never collapse like those that went before.

In the China boom, the unique factor is urbanisation, the mass migration of country folk into the cities.

Urbanisation is real and will continue. But the boom in prices and supply far outstripped demand. Market forces are simply forcing a correction.

How many vacant homes are there?

The number of empty homes in China is estimated at between 20 million and even up to 64.5 million on an extreme estimate.

On top of that, the government is building another 36 million homes over five years as part of its affordable housing plan.

China has had real-estate slowdowns before

It was three years ago that a developer got headlines around the world for giving away a new BMW with every apartment sold.

The government has stepped in with new stimulus each time and the market has rallied somewhat. Until the next downturn.

The simple reality is that China’s recent growth is based on an investment surge of enormous historical proportions. And that surge is now exhausting itself.

This is standard; it happened in Japan in the 1960’s to 1980’s, closely imitated by South Korea and then Taiwan and then by the economies of south-east Asia.

Growth was achieved by adding new dollars of investment, rather than better productivity in the way those dollars were deployed. 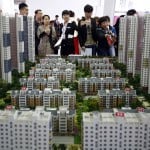 Then it exhausts itself. Always.

Of course there’s a lesson to be learned by Australian property investors from this – all booms end in a downturn and if the boom is BIG, it’s likely to BUST

At the same time Australia, which has been very dependent on China’s economic growth, needs to find other sources of growth otherwise our long period of economic growth without a recession will come to halt.

We can’t be complacent and say – this time it’s different.