The national capital city residential rental vacancy rate remained steady over January despite the typical seasonal effect of reduced demand through the holiday period according to the latest Domain vacancy rate report.

The vacancy rate for houses remained at 2.2 percent with vacancies for units falling from 3.0 percent to 2.9 percent.

The overall total residential vacancy rate was flat at 2.5 percent over the month. 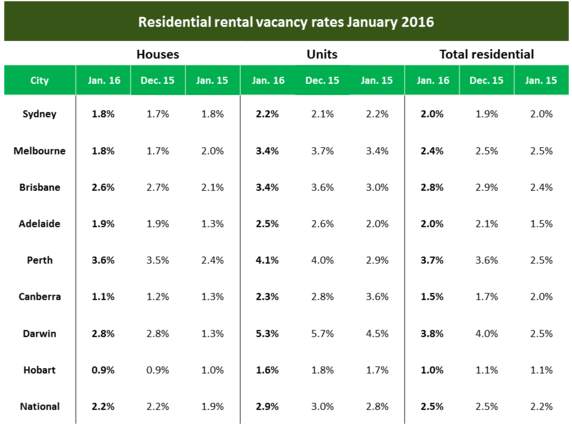 Most capital cities reported continuing tight conditions with low vacancies for house rental markets despite some marginal easing over the month.

Sydney and Melbourne reported slight increases in vacancy rates over January to 1.8 percent but still remain a challenge for tenants seeking properties.

Vacancy rates for houses tightened in Brisbane over the month but at 2.6 percent continue to provide a relatively balanced choice for tenants.

Hobart is still the tightest capital for house vacancies steady at just 0.9 percent.

Vacancy rates for the resource capitals of Perth and Darwin however continue at the highest levels of the all the capitals.

Darwin house vacancies remained at 2.8 percent with rates in Perth rising again to 3.6 percent – both well ahead of the rates recorded over January a year ago.

Capital cities reported mixed results for unit vacancy rates over January with Sydney rising to 2.2 percent and Perth up to 4.1 percent.

All other capitals reported a tightening in vacancy rates with Canberra down sharply from 2.8 percent to 2.3 percent – now well below last January’s 3.6 percent result.

Total residential vacancy rates remain at or below 2.0 percent in Sydney, Adelaide, Canberra and Hobart indicating continuing tough local conditions for tenants generally in those markets.

Perth, Darwin and Brisbane however are clearly continuing to provide the widest choice of rental properties of all the capitals.

Vacancy rates for houses can be expected to remain tight in most capitals over the foreseeable future particularly reflecting he sharp recent decline in investor activity as a consequence of higher interest rates for this group initiated by financial regulators.

The exceptions remain Perth and Darwin where the end to the fly-in-fly-out demand model for housing will continue to have a significant impact on local vacancy rates.

Apartment rental markets however, will provide continuing higher choice of properties for tenants generally as recent record levels of apartment construction continue to flood the marketplace.