When looking at population action, it appears that it is all now happening in Victoria and New South Wales.

These four states account for 97% of the country’s population growth. 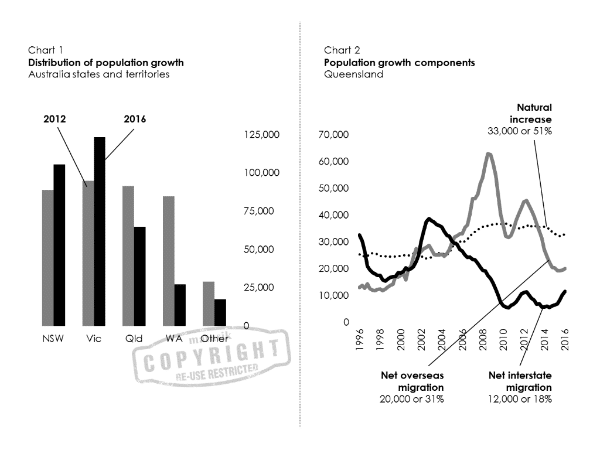 The reason for the overall fall in national population growth over the last five years is due to fewer overseas migrants settling down under.

Now, when it comes to interstate migration, things have changed a fair bit over the past five years.

New South Wales continues to lose population to Queensland and now Victoria, but a lot less than it used to.

Queensland’s interstate migration figures have improved – they have doubled over the last year – to now account for 18% of the state’s 65,000 population increase during fiscal 2016.

Yet, bigger changes in interstate movements have taken place in Victoria and Western Australia.

Five years ago, very few folk moved from interstate to Victoria, yet last year 17,000 people did so.

Western Australia is experiencing the reverse trend with 11,000 moving to WA during 2011-12.

So, what does this mean?

1. People move to where there are jobs first; all other factors are secondary. 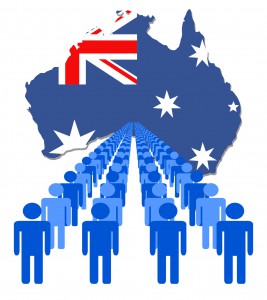 2. Jobs are being created in new pulse points – revisit here.

3. Rising population growth isn’t always a good thing, especially when most of the current moves are to already overcrowded, and often poorly serviced, urban areas.

In many cases, Australia’s population growth is like a Ponzi scheme.

For mine, a decline in our rate of population growth, at this stage of the cycle, is a good thing.

We should be directing migration to where we want it to go.

And this plan is needed now.

Please do something about this, Malcolm!

We need a younger demographic to buy stuff; pay taxes and support us oldies.

One of Australia’s saving graces is that it has enjoyed a high rate of population growth over recent decades.

This will hold us in good stead – well, better off than many other developed countries – in coming decades.

It is just that too much of the current population growth is now concentrating in a select few areas.

We can do something about it.