The RBA (and probably many politicians) have been hoping that the construction sector will take up from where the mining sector left off and boost our economy.
So it was interesting to see that when yesterday’s residential building approval figures came out (for December ) the media was quick to pick that residential building approvals softened during December rather than emphasising that the December quarter was the strongest for building approvals since September 1994.
Now that’s a good sign and even the Housing Industry Association, had to admit it was a great year for the building industry:

“The number of detached house approvals fell by 3.2 per cent in December with multi-unit approvals slipping by 2.5 per cent,” Shane Garrett added. “Despite the monthly falls, activity in both segments of the residential building market is significantly higher than late 2012,” Shane Garrett pointed out.

“What concerns us most about the figures for December is that approvals fell in all states bar one,” cautioned Shane Garrett. “We are conscious that supply side conditions could suppress the current recovery, and December’s figures may partly reflect this difficulty,” Shane Garrett warned.[sam id=31 codes=’true’]

“In many key markets, the planning process is moving too slowly for a nation of over 23 million,” explained Shane Garrett. “There is also a raft of difficulties with land release, development and infrastructure funding.

Failure by policy makers to act on these issues risks strangling the recovery in new home building,” Shane Garrett added. “Housing activity has much to offer in terms of supporting economic activity and employment as we face into a period of transition,” concluded Shane Garrett. 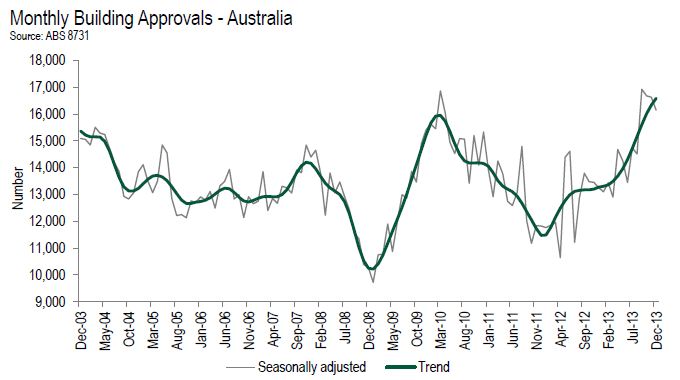 'Home building approvals finish 2013 on a high' have no comments