Over the past 5 years, the sunshine states capital has experienced a surge in residential apartment constructions; fuelled predominantly by the mining sector as well as a slight pick-up in foreign tourism numbers, however, with the rapid decline of the mining and commodities industries, is tourism enough to solely drive the economy?

SQM Research recently delved into the supply and demand situation for Brisbane in its Housing Boom & Bust Report and the results were interesting.

Having realised that an oversupply may be looming if not already in place, it appears that some developers that can afford to delay construction have done so, opting to ride out the storm so to speak; this would obviously decrease our number of original forecast completions.

According to the Australian Bureau of Statistics (ABS), population growth for Brisbane increased by 1.72% in 2015 to arrive at an estimated total population of 2,084,850 people.

If we adopt that rate for our forecast population growth of circa 36,000 for 2017, it would mean that a demand of around 13,000 dwellings would be necessary, however, the total forecast completions by SQM Research for Greater Brisbane (apartments as well as house & land) may be in the vicinity of 21,000, meaning that an oversupply of 8,000 new properties could be possible.

Adopting the same methodology as 2017 as well as the same person per household rate of 2.7, we can assume that Greater Brisbane may be oversupplied by circa 9,000 new dwellings in 2018 due to a required demand of circa 14,000 dwellings and a forecast supply of 23,000. 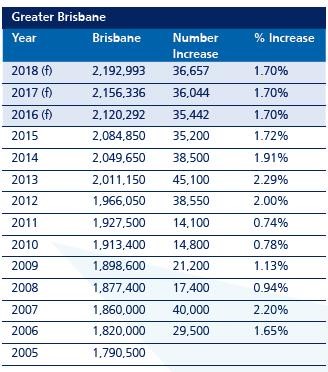 An oversupply of dwellings is the obvious catalyst in contributing to vacancies. 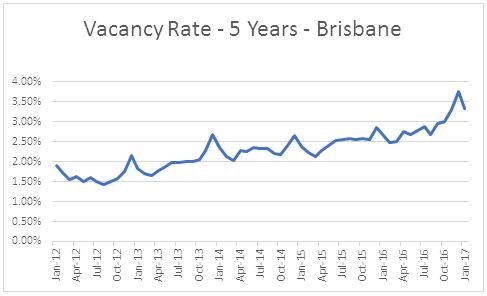 When compared to the rest of the nation’s capitals, Brisbane has the third highest vacancy rate behind Perth’s whopping 4.7% and Darwin at 3.7%. 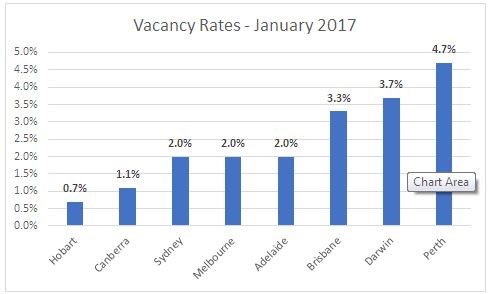 Even though vacancies in Brisbane have increased, it’s selling point remains affordability, especially in a time when the great Australian dream of home ownership is becoming further unobtainable in Sydney and Melbourne.

At present, Brisbane’s median house asking price is $601,430, 114% cheaper than Sydney and 34% lower than Melbourne. Gross yield numbers for properties that are tenanted aren’t too shabby either.

For those on the hunt for a deal, perhaps consider Brisbane towards 2018 as prices may likely soften.

'Brisbane Vacancies on the Rise' have no comments