Despite the recent bout of low interest rate fixed loans advertised borrowers are shying away from fixing their home loans.

According to the latest Housing Finance data by the Australian Bureau of Statistics (ABS) the proportion of borrowers who fixed their home loan in June 2014 was at the lowest level in 17 months since February 2013, at 14.26 percent of all loans financed.

Michelle Hutchison, Money Expert at finder.com.au, said lenders need to do more if they want to attract borrowers to fix.

“It’s no surprise that fewer borrowers are fixing their home loans, because fixed home loans are not as competitive as variable rate home loan deals.

Despite many lenders, including the major banks, dropping some of their fixed home loans in recent weeks, they have a long way to go before they are lower than variable rates.

Many lenders have room to be more competitive in the fixed rate home loan market. 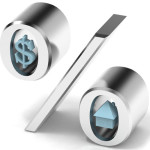 For instance, according to the finder.com.au/home-loans database, the lowest variable home loan rate is 4.54 percent by Loans.com.au – 0.39 percentage points lower than the cheapest five-year fixed rate of 4.93 percent by UBank.

Even though this is the lowest five-year fixed rate we’ve seen, it would still cost an extra $71 per month in repayments for a $300,000 home loan over 30 years.

The lowest three-year fixed rate is currently 4.67 percent also by UBank, which is 0.13 percentage points higher than the cheapest variable loan rate.

However,  a survey of 20 leading economists and experts – including from the major banks – expect interest rates to start rising next year, if not sooner.

This could mean that we won’t see fixed rates fall much further, so for borrowers who are worried about the higher costs when interest rates rise, it’s worth comparing fixed home loans for the security that repayments won’t change for the fixed period, even though they may not be as competitive as variable home loan rates.”

'Borrowers shy away from fixed home loans' have no comments