In October 2015, Australians still believe Economic & Financial issues are the most important set of problems facing Australia 38% (up 1% since July 2015).

But now Terrorism/ Wars/ Security/ Safety 30% (up 10%) are clearly the biggest problems facing the World ahead of Environmental issues 21% (down 2%) according to the latest Roy Morgan Research conducted in October 2015.

When asked about the most important problem facing Australia, Economic & Financial issues are named by 38% of Australians (up 1% since July 2015). 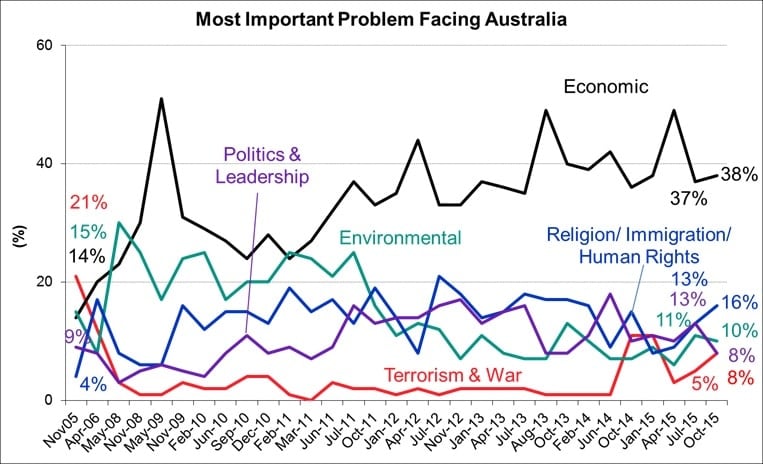 Important Economic & Financial issues include the Economy/ Economic problems and Interest rates 11% (up 1%), Unemployment 11% (up 2%), Poverty and the Gap between the rich and poor 4% (up 1%), Globalisation/ Fairer world trade 2% (unchanged) and over reliance on the Mining Industry 2% (unchanged).

The next most important set of issues, labelled Religion/ Immigration/ Human Rights are named by 16% (up 3%) of Australians including the related policy issues of Refugees & Asylum seeker problems 4% (unchanged), Immigration/ Immigration policy 4% (up 1%) and Religion/ Religious fundamentalism 3% (up 2%).

Environmental issues are mentioned by 10% (down 1%) of Australians as the most important problem facing Australia including Climate Change/ Global warming 7% (unchanged).

A further 10% (unchanged) of Australians mentioned a Social Issue as the most important problem.

Government/ Leadership from politicians/ The Prime Minister was mentioned by only 8% (down 5%) of Australians – the lowest for this set of issues since October 2013 just after the Abbott Government was first elected and still in its honeymoon phase.

These issues include Leadership from Politicians/ Courage to lead/ Lack of vision 5% (up 2%) followed by Politics/ Political system/ Too much Government spending 3% (down 4%). In contrast to his predecessor The Prime Minister (Malcolm Turnbull) was not mentioned as an issue 0% (down 2% from when Abbott was still Prime Minister).

Terrorism/ Wars/ Security issues were mentioned by 8% (up 3%) as a problem facing Australia.

Analysing by State shows different problems rated as most important across different States. 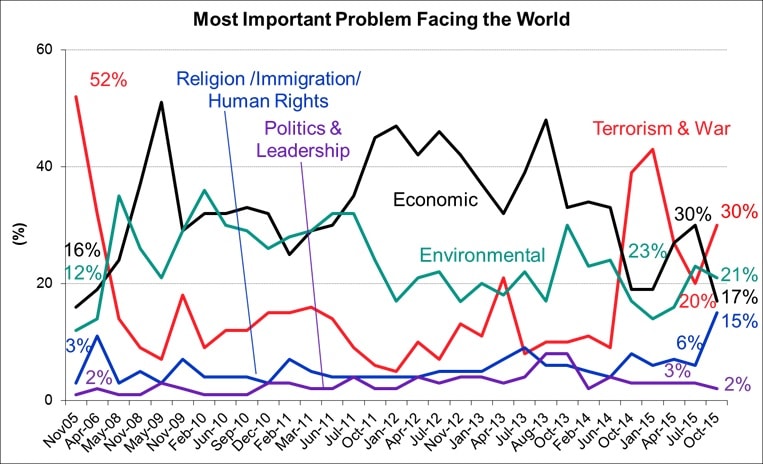 Terrorism was mentioned by 19% (up 6%) and Wars and Conflicts by 8% (up 3%); Environmental Issues were mentioned by 21% of Australians (down 2%) as the biggest problem facing the Worldtoday.

The most important Environmental issue is clearly Climate Change/ Global warming 16% (up 1%).

Economic/ Financial Issues were mentioned by only 17% (down 13%).

This is the lowest this set of issues has been as a problem facing the World for a decade since November 2005 – well before the Global Financial Crisis in 2007-09.

Religion/ Immigration/ Human Rights/ Government/ Politics/ Leadership are mentioned as being the World’s biggest problem by 17% (up 8%) – this is the highest these issues have ever been as a problem facing the World.

These problems include Refugees and Asylum seeker problems 9% (up 8%), Religion/ Religious fundamentalism 3% (up 1%) and Politics/ Leadership 2% (down 1%).

Social Issues are the next biggest problem according to 9% (down 1%) of Australians.

Social Apathy/ Family breakdowns/ Selfishness/ Moral decline were mentioned by 2% (unchanged) as were Drugs and drug abuse 2% (up 1%) and Anger/ Violence 2% (up 2%).

“A good sign for our new PM is that not a single respondent mentioned Turnbull as the ‘most important problem’ facing Australia – down 2% from July when several respondents mentioned former PM Tony Abbott. Additionally, only 8% (down 5%) of Australians mentioned Government/ Politics/ Leadership as the ‘most important problems’ facing Australia – the lowest overall figure for these types of issues since October 2013 just after the Abbott Government was in its honeymoon just after being elected.

“The largest Economic & Financial issues for Australians are The Economy/ Economic problems/ Interest rates 11% (up 1%) and Unemployment 11% (up 2%). These issues are prominent across the country in every State of Australia however in South Australia (35%) and Victoria (15%) Unemployment is easily the most mentioned issue as both of these States face the closure of the automotive industry and continuing questions regarding the future of related manufacturing industries.

“When considering the most important problems facing the World, Terrorism/ Wars/ Security issues 30% (up 10%) is easily regarded as the largest problem including Terrorism 19% (up 6%) and Wars & Conflicts 8% (up 3%). The recent Russian decision to join the conflict in Syria has clearly added an additional dimension to the already complicated situation surrounding Syria’s Civil War. The Russian decision means that it is the first time since World War II more than 70 years ago that the United States and Russia have been flying combat missions in the same country at the same time.

“Environmental issues 21% (down 2%) are regarded as the next largest set of problems facing the World with Climate change/ Global warming 16% (up 1%) easily the most prominent Environmental issue ahead of the UN Conference on Climate Change due to be held in Paris in a few weeks.