Latest ABS data reports that the national unemployment rate fell over March providing some encouragement that official interest rates may remain on hold.

The March seasonally adjusted rate of 6.1 percent was below the 6.2 percent recorded over February and was despite a rise in the participation rate from 64.7 percent to 64.8 percent.

Encouragingly 37,700 jobs were also created over the month. 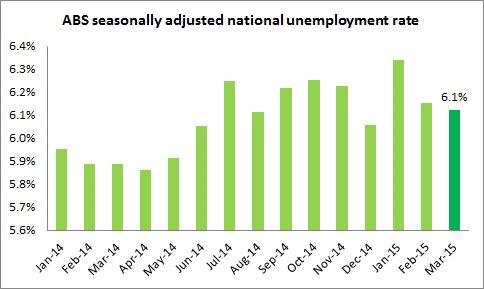 South Australia reported best result over the month with the seasonally adjusted unemployment rate falling from 6.8 percent to 6.4 percent.

Western Australia’s unemployment rate also fell over the month – down from 5.7 percent to 5.5 percent and the lowest of all the states.

The better unemployment result over March may encourage the Reserve Bank to continue its current wait-and-see approach on interest rate settings next month.

'Better employment figures may keep rates on hold' have no comments