Corelogic's  National Home Value Index was up 0.7% in March, a subtle increase on the 0.6% lift recorded in February.

The uptick in the monthly rate of growth was primarily driven by stronger conditions in Brisbane, Adelaide, Perth and the ACT, along with several regional areas, offsetting a slip in values across Sydney and Melbourne.

Melbourne’s housing market has seen the quarterly rate of growth slow from 5.8% in April last year to just 0.1% over the past three months.

While the monthly rate of growth was up among some cities and regions, there is mounting evidence that housing growth rates are losing momentum. 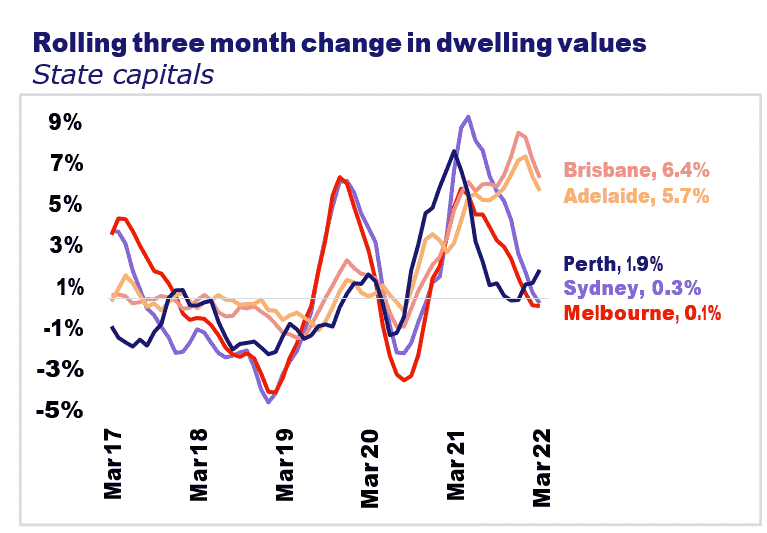 Virtually every capital city and the major rest-of-state region have moved through a peak in the trend rate of growth sometime last year or earlier this year.

The sharpest slowdown has been in Sydney, where housing prices are the most unaffordable, advertised supply is trending higher and sales activity is down over the year.

There are a few exceptions to the slowdown, with regional South Australia recording a new cyclical high over the March quarter and some momentum is returning to the Perth market where the rate of growth is once again trending higher since WA re-opened its borders.

With the softening in market conditions, the national annual growth rate (18.2%) has fallen below the 20% mark for the first time since August last year, after reaching a cyclical high of 22.4% in January 2021.

The annual growth trend will fall sharply in the coming months, as the strong gains recorded in early 2021 drop out of the 12- month calculation.

National housing turnover is also easing, with preliminary transaction estimates for the March quarter tracking 14.3% lower than the same period in 2021, but still 12.2% above the previous five-year average.

Nationally, the volume of housing sales is coming off record highs but there is some diversity across the capital cities in these figures as well.

Our estimate of sales activity through the March quarter is 39% lower than a year ago in Sydney and 27% lower in Melbourne, while stronger markets like Brisbane and Adelaide have recorded a rise in sales over the same period.

Regional Australia continues to show some resilience to a slowdown with housing values across the combined regional areas rising at more than three times the pace of the combined capital cities through the March quarter.

Regional dwelling values increased 5.1% in the three months to March, compared with the 1.5% increase recorded across the combined capital cities. 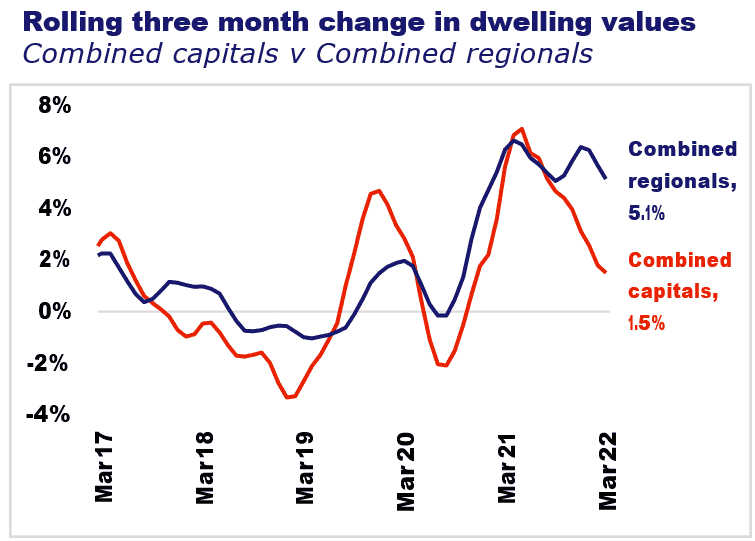 The rolling quarterly growth rate in regional dwelling values has consistently held above the 5% mark since February 2021. 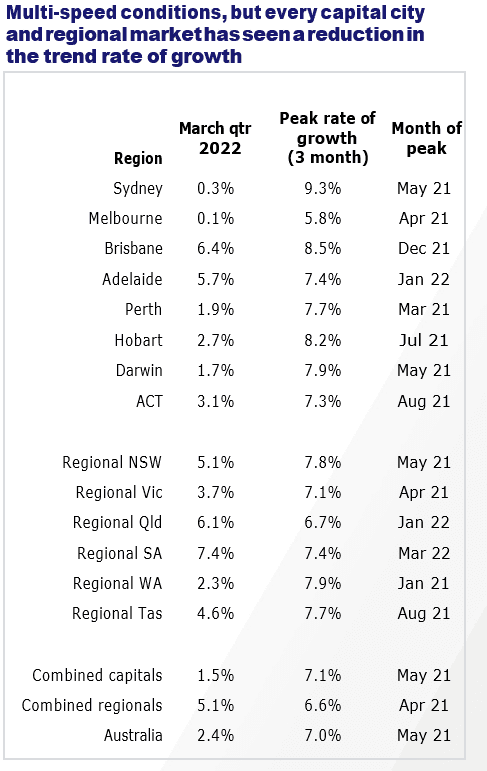 The number of people living in regional areas of Australia increased by almost 71,000 residents, while residents living in the capitals fell by approximately 26,000 (mostly due to a sharp drop in Melbourne and, to a lesser extent, Sydney). 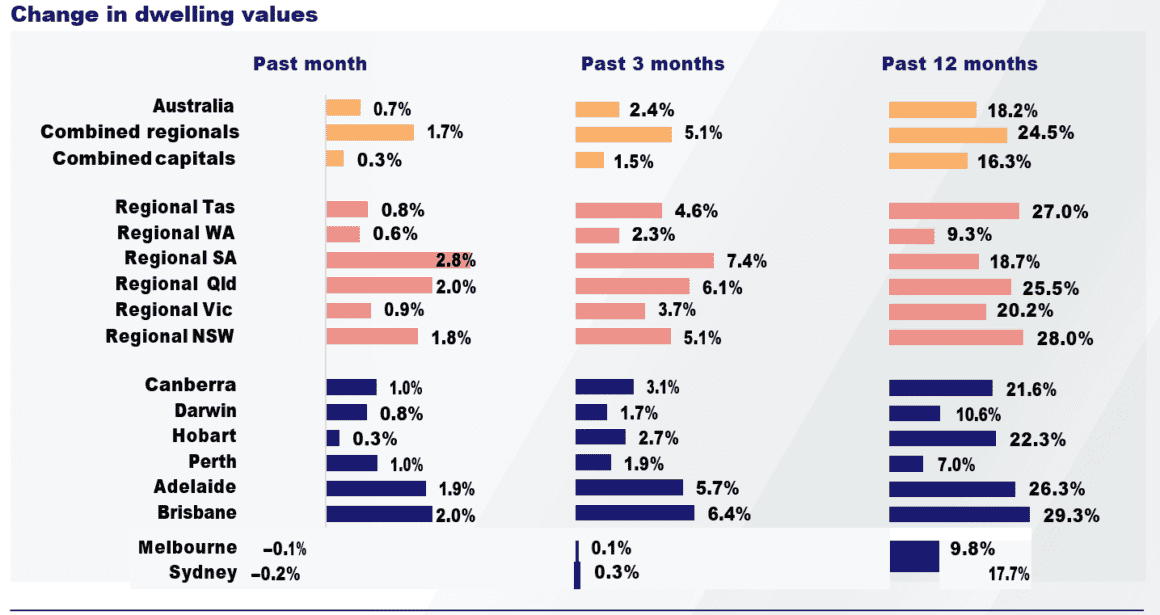 Advertised inventory, at a national level, is tracking 30% below the previous five-year average over the four weeks ending March 27. 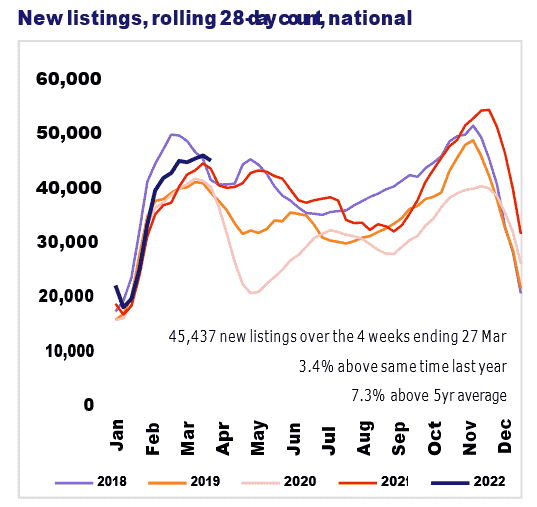 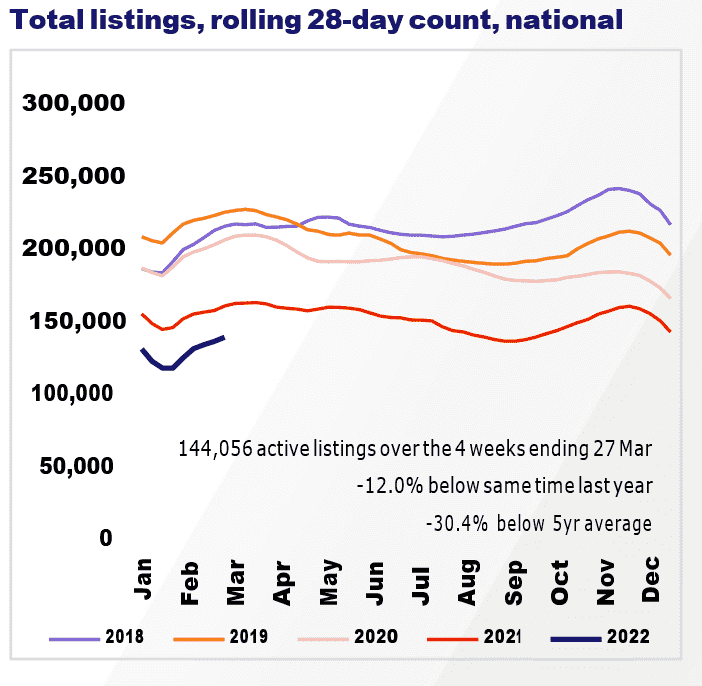 However, a more detailed analysis of each capital city highlights significant differences in the total number of homes available to purchase.

In Melbourne, the total advertised supply was 8% above the previous five-year average towards the end of March, while the number of homes available to purchase in Sydney had virtually normalised to be 7.5% higher than a year ago and only 2.6% below the five-year average.

Higher stock levels across these markets can be explained by an above-average flow of new listings coming on the market in combination with a drop in buyer demand.

With higher inventory levels and less competition, buyers are gradually moving back into the driver’s seat.

That means more time to deliberate on their purchase decisions and negotiate on price.

In contrast, advertised stock levels in Brisbane and Adelaide remain more than 40% below the previous five-year average levels and around 20% to 25% down on a year ago.

It’s a similar scenario across regional Australia, where the total advertised housing stock was 22% below last year’s level and 43% below the previous five-year average.

Such low inventory levels along with persistently high buyer demand continue to create strong selling conditions in these areas, supporting the upwards pressure on prices.

At a macro level, rents are still rising at well above average rates.

The rebound is partly seasonal as rental trends tend to be stronger through the first quarter of the year, but there are other factors at play including stronger conditions across the medium to the high-density rental sector.

The rate of growth in unit rents has strengthened to reach a cyclical high of 3.0% in the March quarter, rising at a materially faster pace than house rents (2.4%). 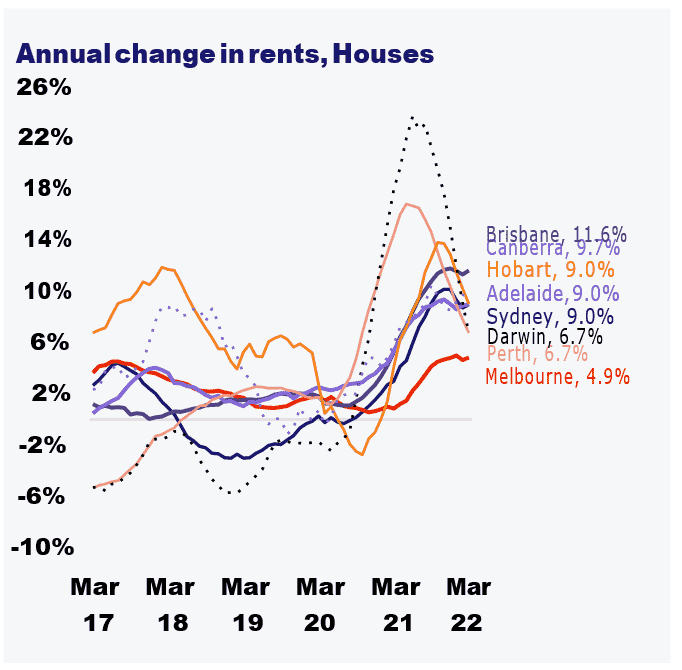 Through the pandemic to date, capital city house rents have risen by 13.8% compared with a 3.4% rise in unit values. 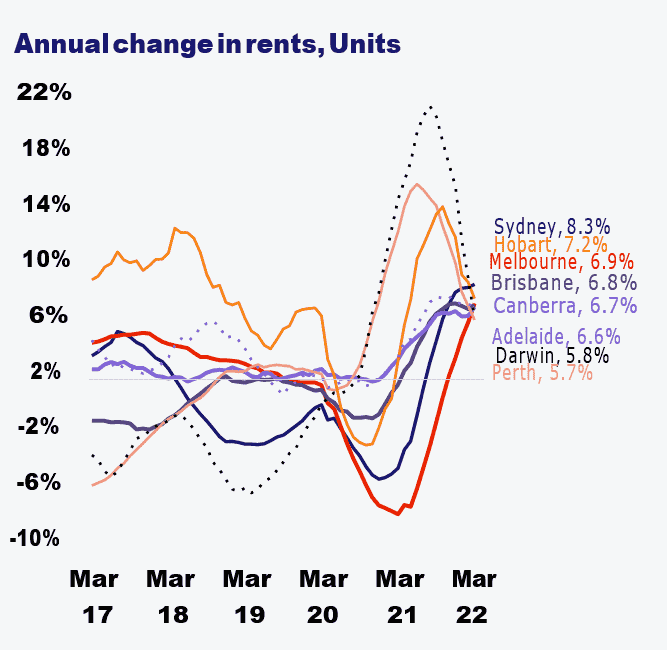 Sydney is now recording the strongest lift in unit rents, up 8.3% over the 12 months to March following a 7.2% peak to trough fall in the first half of the pandemic.

Similarly, Melbourne unit rents are up 6.9% over the past year after posting an 8.5% peak to trough fall.

The net result is that renting a unit is substantially more affordable than renting a house.

This affordability advantage, along with a gradual return of overseas migration, employees progressively returning to offices and inner-city precincts regaining some vibrancy, are likely key factors pushing unit rents higher.

With national rents up 2.6% over the March quarter and housing values rising by a lower 2.4%, gross yields have posted a rare rise in March, up to two basis points from a record low of 3.21% in January and February to 3.23%.

If rents continue to outpace housing values, which is likely if the housing market moves into a downturn, yields will continue to recover. 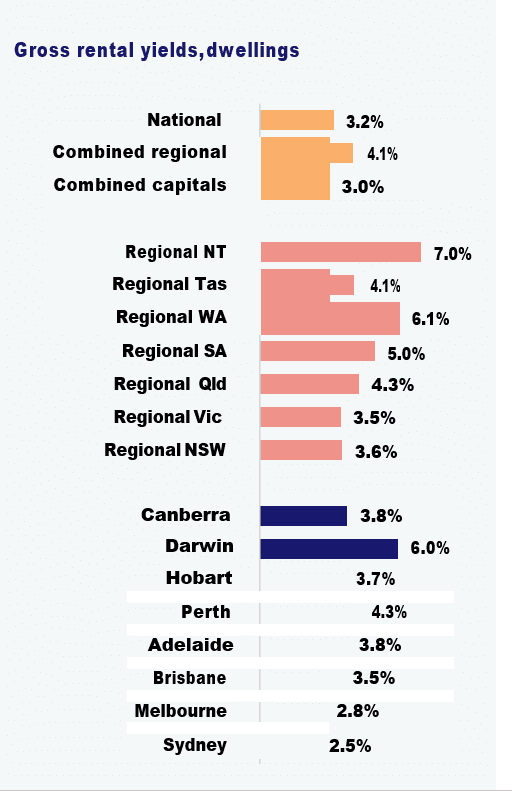 The housing market has transitioned from an upswing generally characterised by a strong and broad-based rise across the regions of Australia, to one best described as multi-speed.

At one end of the spectrum Australia’s two largest cities, Sydney and Melbourne, are recording flat to falling housing values, while at the other is Brisbane and Adelaide, where the quarterly pace of growth continues to rise at an annualised pace of more than 20%.

Perth too is re-accelerating off a low base, which can, at least partially, be attributed to state borders re-opening, and regional markets are mostly strong as population growth runs up against low available supply levels.

Despite the diversity, the outlook for housing remains skewed to the downside.

Rising fixed-term mortgage rates and the prospect of higher variable mortgage rates later this year are only part of the reason why housing markets are likely to soften as 2022 progresses. Other factors include:

However, there are other factors that should help to offset the downside risk.