Australia reached a population milestone while you were sleeping

According to theAustralian Bureau of Statistics Australia’s population hit 24 million at 12.51am on Tuesday 16th February. 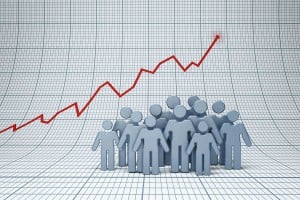 This is 17 years earlier than official predictions made at the turn of the century.

During the second half of last century it took around four-and-a-half years to add each million people.

This is how fast we’re growing:

The ABS projects our population using this Population Clock There projections are based on the following estimates:

Leading to an overall total population increase of one person every 1 minute and 31 seconds.

Why are we growing so fast?

An up-tick in the fertility rate, greater longevity and robust net migration has driven the faster-than-expected arrival at this new population milestone.

In late 1999 – when the population reached 19 million – the Bureau of Statistics projected the national population would reach 24 million in 2033.

Trends at the time suggested the each new million people would be added in 7 to 9 years but instead Australia has been adding an extra million every 3-4 years.

One factor is a mini baby boom last decade.

That’s well below the peak fertility rate of 3.5 babies per woman reached in 1960 and 1961. Our improving longevity has also made a difference.

Net overseas migration has also outstripped the forecasts made in the late 20th century although numbers have slowed somewhat in the past few years.

Clearly our growing population will be one of the factors underpinning our property markets.

Even more important will be household formation and how and where people want to live.

We now want to live in the big capital cities.

This is very different from the time of Federation in 1901, when only 37% Australian’s 3.8 million people lived in a capital city.

Now 67% live in a capital city and this trend will continue with Australia’s biggest city, Sydney, set to top 5 million later this year having doubled in half a century.

And Melbourne, with a population of 4.5 million is catching up.

If you do the numbers, at their current rates of growth the population of Melbourne and Sydney will increase by another 7% or so in the next 5 years.

If Australia’s population continues to grow at 1.5 per cent per year – comparable to the rate in recent years – the bureau’s population clock will reach 40 million by mid-century.

'Australia’s population hit a milestone: Here’s what it means to you' have no comments