Australia’s economy is at a watershed moment according to NAB senior economist David de Garis.

Economic growth is slowing, households are still stashing their cash rather than spending and business investment is slow.

As the economy directly impacts our property investment markets, even though it’s a little heavy, it’s worth reading what de Garis has to say…

The headline 0.6% GDP growth from today’s March quarter national accounts was only marginally shy of market expectations of 0.7% and that of our own, revised up yesterday from 0.4%. Annual growth has now declined back into the 2s, at 2.5%, from its 3.2% pace at the end of last year.

Underneath the overall growth headlines, a couple of stories are emerging.

First, the tempo of household consumption did not accelerate anything approaching what the retail sales volume data had inferred.

Consumption grew a still moderate 0.6% in the quarter to be up 2.0% over the course of the last year, not far above population growth over that period and evidence of a cautious consumer.

The 2.2% growth in retail volumes in the quarter was offset by either outright declines in some other areas of purchases (eg. New cars, car operation costs, insurance), no doubt reflecting the discounting to attract more spending back into shops for once.

The consumer was much less upbeat than a bald reading of Q1 retail spending might have inferred. Of course, we’ve seen flatter retail more recently, in March and April, together with brittle consumer sentiment of late. 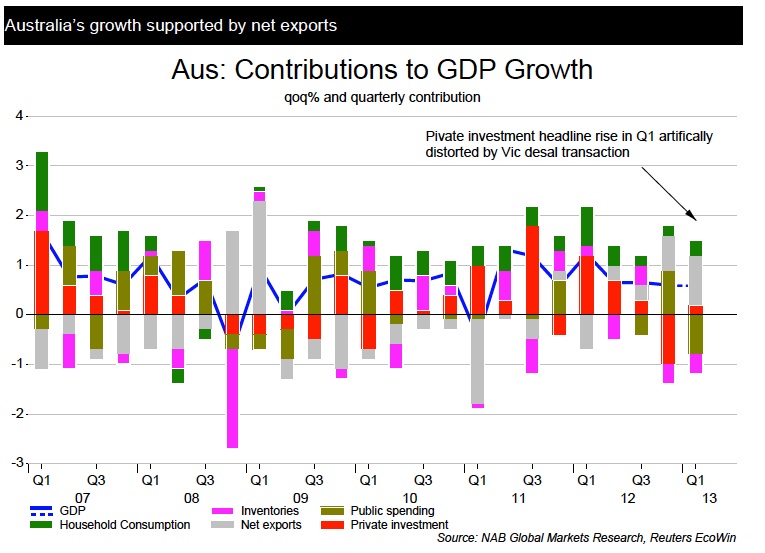 Dwelling investment was flat in the quarter, reflecting some increase in new home building and but lower renovation activity.

There are some hints of demand coming back of late, especially on the more traditional new home side, but it’s tentative and it’s unlikely other than to be a modest contributor to growth over the next year or so.

Business investment contracted by 4.3% in the quarter, now just 2.3% above year earlier levels. A year ago, business investment was rocketing along at an over 20% annual rate and that’s now stalled. Technically, while it’s possible that the mining investment growth story may have another quarter or so of temporary re-growth, that’s what it will be, only temporary.

Mining investment contracted in Q1, reflected also in the large declines in plant, equipment and engineering construction spending and indeed in the outright decline in WA’s State Final Demand of 3.9% in Q1. WA would have had some buffer by exporting some of that slowdown to producers/ suppliers in other states and economies, also evident in the 12% decline in capital goods imports.

Another takeaway is the cushion from better net export volumes. This came – and will continue to come – from declining imports that are very sensitive to shifts in private spending, and over time from higher export volumes, largely from iron ore for now, and later from LNG, but that’s a late 2014 and beyond story. These will provide a big boost to export revenue, but also to measured productivity, new operational projects requiring a lot less manpower.

On the industry side, the now familiar theme has continued into the March quarter. Mining industry output rises, fuelling a rise in resource export shipments, but manufacturing contracted overall, with machinery and equipment industries and metal products taking the brunt from slower business investment and some pull-back in car sales and of course the still-debilitating competitive headwind from the $A.

Now at a watershed moment

The economy is now at that watershed moment as the mining investment boom has either passed its peak or about to, transitioning to a lower growth plane, awaiting signs of a decisive pick up in other elements of domestic spending.

NAB forecasts have been calling for the economy to grow by around 2¼% this year, rising somewhat to around 2¾% for 2014 based on our initial post-report analysis. That growth assumes we get further positive flow through from monetary easing (eg housing) and some net forecast decline in the Australian dollar over time. Even that growth though would be well within the economy’s potential to grow and not threaten overall inflationary pressures.

We still expect the RBA to cut the cash rate again, to 2½% in the period ahead, as the economy charts its course through this transitioning period.

'Australia’s economy is at a watershed moment' have no comments