Australia’s regional centres — particularly those along the coast — have higher than average proportions of Baby Boomers, figures released by the Australian Bureau of Statistics (ABS) show.

Generation X & Y can mainly be found in capital cities, while many of the iGeneration live around major educational institutions.

The release “Population by Age and Sex, Regions of Australia, 2014” presents the latest regional population numbers as at 30 June 2014, and shows how much the distribution of different age groups varies across Australia. 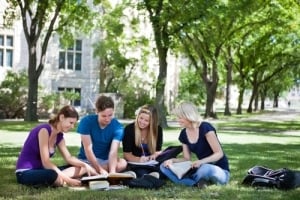 “While the majority of Baby Boomers (63 per cent) lived in our capital cities in 2014, the areas with the highest proportions of Baby Boomers (persons aged between 48 and 67 years in 2014) were located around urban centres along the coast or in regional Australia, in so-called sea change or tree change areas,” said Denise Carlton from the ABS.

“Topping the list was Benalla Region, in north-eastern Victoria. Nestled between the regional centres of Shepparton and Wangaratta, Benalla Region had the highest proportion of Baby Boomers (40 per cent) of any area in Australia.

“High proportions of Baby Boomers were also found in several areas close to the coast, including Bega-Eden Hinterland and Eurobodalla Hinterland on NSW’s south coast, Magnetic Island off the Queensland coast and Bruny Island – Kettering in south-east Tasmania, all at 38 per cent.” 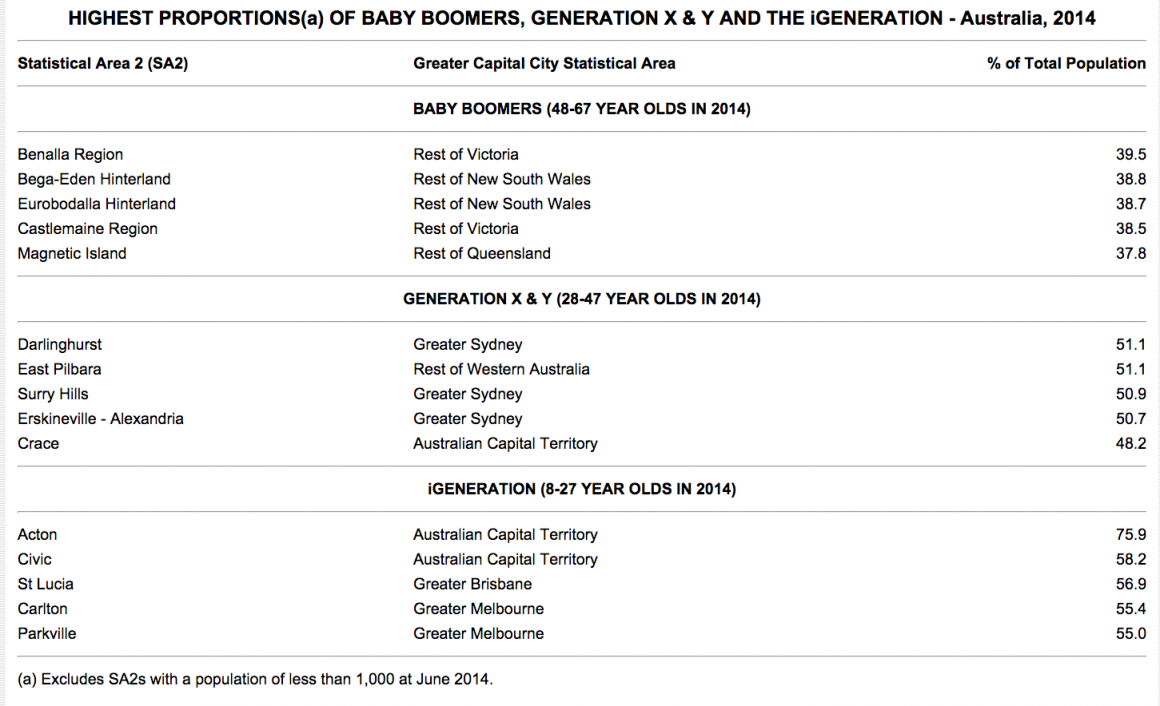 Regional distribution of the different generational groups in 2014 tended to reflect their stage in the life cycle.

The areas with the highest proportions of Generation X & Y (people aged between 28 to 47 years in 2014) were Darlinghurst in inner Sydney and the Western Australian mining area of East Pilbara (both over 51 per cent).

For the most part, Generation X & Y — being in the middle stages of their working lives — were found in capital city areas, such as Surry Hills and Erskineville – Alexandria (both 51 per cent) in Sydney, Collingwood and Elwood (both 47 per cent) in Melbourne, Fortitude Valley (48 per cent) in Brisbane, and Crace (48 per cent) in Canberra.

Higher than average proportions of the iGeneration (people aged between 8 to 27 years in 2014) were found in the inner and central parts of our capital cities, and in areas near tertiary education institutions.

Acton (ACT), where the Australian National University is based, had the highest proportion of the iGeneration in Australia (76 per cent).

For more information see Population by Age and Sex, Regions of Australia, 2014 (cat. no. 3235.0), available for free download from the ABS website: http://www.abs.gov.au

'Where do Australia’s Baby Boomers, Gen X & Y and the iGeneration live?' have no comments