Without fail the hot topic at this time of year is Christmas spending.

And it looks to be a bumper year for Christmas 2014, which comes with an $8.3 BILLION price tag according to the recent creditcardfinder.com.au Christmas Shopping Survey.

With the official annual spending season kicking off, new research reveals Australians are expected to spend $8.3 billion [1] on Christmas gifts this year, with an average total spend of $488 per adult.[2]. 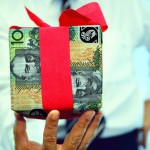 Over one in four Australians (27 percent) will be spending $500-1,000 on Christmas presents this year, while more than half (61 percent) will keep their present budgets below $500.

Comparing states, those in the Australian Capital were the biggest spenders, forking out almost $600 on Christmas presents, on average.

Those in Queensland and South Australia on the other hand were the cheapest when it came to their Christmas gift budget, with an average spend of $420 for both states. 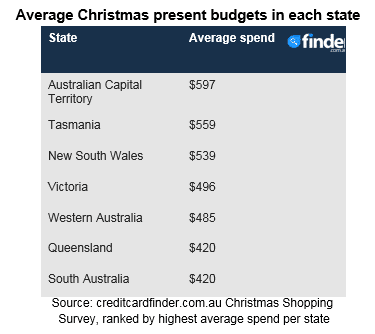 Michelle Hutchison, Money Expert at creditcardfinder.com.au, said the findings highlight the need for Australians to control their spending at this time of the year.

“With Christmas around the corner, it can be easy to blow the festive budget, especially when it comes to buying presents.

“Our survey shows that many men and women of all age groups are planning to spend significantly on buying Christmas gifts.
So it’s important to control your spending and keep track of your budget or you won’t enjoy the festive season.”

Who is splashing the cash?

Generation X (aged 35-54) will be the biggest group of spenders on gifts this year according to the survey, with an average spend of $530.

Comparing genders, women are planning to spend slightly more on Christmas presents than men, with an average spend of about $500 compared to $480 for men.

However, a higher proportion of men are planning to hit over $1,000 on gifts (13 percent) compared with women (11 percent).

“It’s the most expensive time of year and many Australians feel the pressure to buy more than they necessarily can afford.

“Many Australians rely on their plastic to get them through Christmas.”

Earlier this year the finder.com.au Christmas Debt Survey found that the majority of people used their credit cards for their Christmas shopping last year.

Out of those cardholders, about 200,000 will still be paying off this debt in 2015.
“And we don’t expect this year to be any less of a spending headache, with creditcardfinder.com.au estimating that we will spend a whopping $26.68 billion on our credit cards in December[4].”

“Using credit cards for purchases can be harder to keep track of your spending because you’re not withdrawing cash.”

So if you are planning to use your credit cards for your Christmas shopping, make sure you set a budget before heading out or jumping online, record your purchases or collect your receipts and don’t forget to take into account extra costs like credit card surcharges and shipping.

“And if you find yourself in over your head after your shopping spree, make sure you compare balance transfer credit cards to save on interest while paying off your debt”.

[1] Based on average spend of $488 from the creditcardfinder.com.au Christmas Shopping Survey, multiplied by total number of Australian adults (about 17 million, Australian Bureau of Statistics)
[2] Experian Hitwise 2013, 2014
[3] creditcardfinder.com.au analysis of Reserve Bank data
[4] Based on a projected average growth rate of credit card spend every December for the past five years, Reserve Bank data.

'Australians will spend $8.3 billion on Christmas presents this year' have 1 comment