The good news for the re-elected Turnbull Government is that June unemployment fell 1.1% to 9.6% – although this is still well above the current ABS figure for May 2016 (5.7%).

They say that the increasing part-time employment leads directly to increases in under-employment – now at 8.3% (up 0.9% since May 2016).

“This slow employment market was largely ignored by the major parties in the Federal Election campaign. It is why neither party secured a clear victory. The lack of coherent plans and details on how each major party would grow the Australian economy and generate jobs is the reason for the high vote for minor parties – today counted at 22.9%.

“Hopefully, the ‘shock’ of a close election result – along with the record high support for minor parties – will mean both Prime Minister Malcolm Turnbull and Opposition Leader Bill Shorten start listening to the clear message the electorate is sending the major parties. Nearly a quarter of the Australian electorate feels ignored and unheard by Australia’s political leaders.

“Acknowledging Australia’s true unemployment and under-employment figures is the first step both Turnbull and Shorten should take to ‘reconnect’ with the many voters who have abandoned the major parties. In the US, presumptive Republican nominee Donald Trump has set a fine example for both leaders. On several occasions Trump has stated the real US unemployment rate is far higher than the widely quoted figure – nearer to 20% than the official rate of only 4.7%!” 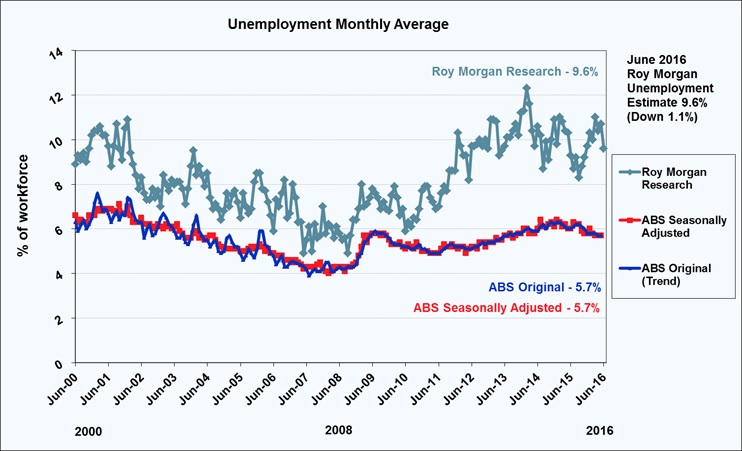 'Australian real unemployment 9.6% in June as new Government takes office' have no comments