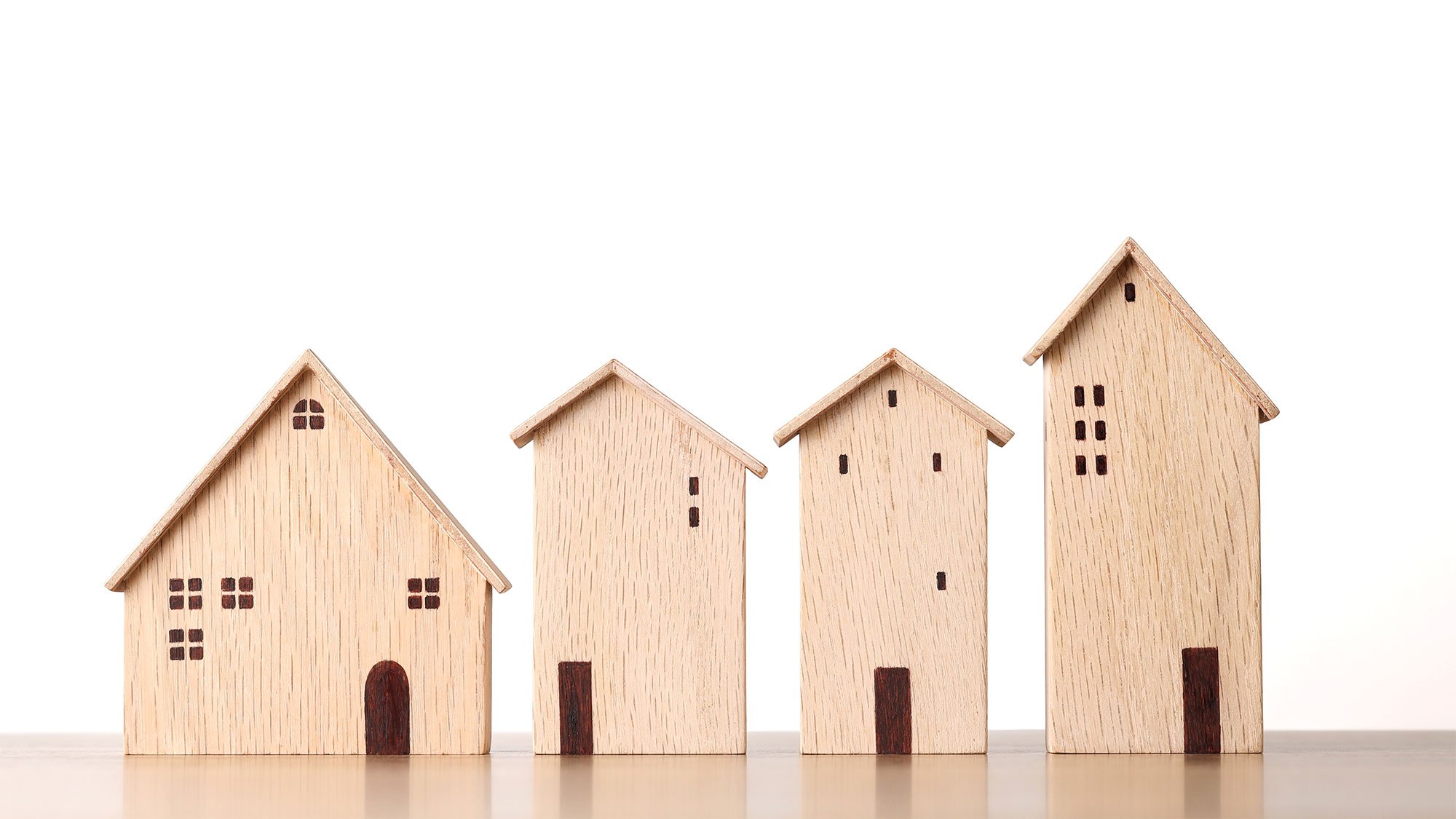 Australian housing values were 1.0% higher in December, slowing from a 1.3% rise in November, continuing the softening trend in the monthly growth rate that has been evident since the national index moved through a cyclical high of 2.8% growth in March 2021.

As dwelling value appreciation slows, conditions are becoming more diverse amongst the capital cities and regional areas of Australia. 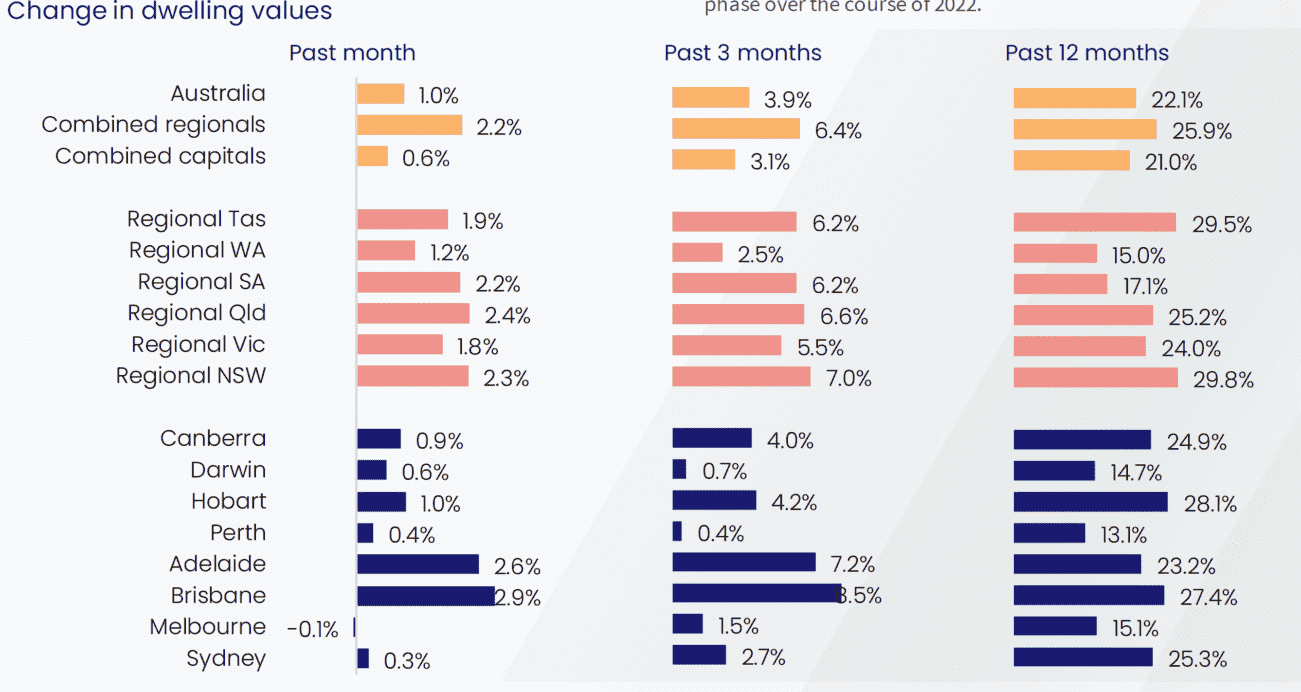 Brisbane and Adelaide, along with regional Queensland, are the only broad regions where there is no evidence of value growth slowing just yet, with the monthly rate of growth reaching a new cyclical high in December.

These regions show less of an affordability challenge relative to the larger capitals, as well as better support for housing demand with Queensland in particular showing strong interstate migration.

Additionally, we haven’t seen the same level of supply response seen in other regions, with the trend in advertised supply remaining well below average in these markets.

On the other end of the spectrum, momentum has slowed quite sharply in Melbourne and Sydney dwelling markets, with both cities recording the softest monthly reading since October 2020.

A surge in freshly advertised listings through December has been a key factor in taking some heat out of the Melbourne and Sydney housing markets, along with some demand headwinds caused by significant affordability constraints and negative interstate migration.

Regional Australian housing values have seen some renewed momentum with a monthly rise of 2.2%, the highest in nine months.

Regional Queensland was the clear standout across the rest-of-state markets in December, with housing values up 2.4%, however over the year the strongest regional markets have been in New South Wales (29.8%) and Tasmania (29.5%).

The most popular regional markets have seen housing values rise more than 30% over the calendar year, with the Southern Highlands and Shoalhaven recording the highest annual rise in home values at 37.7%, followed by Queensland’s Sunshine Coast at 33.7%. 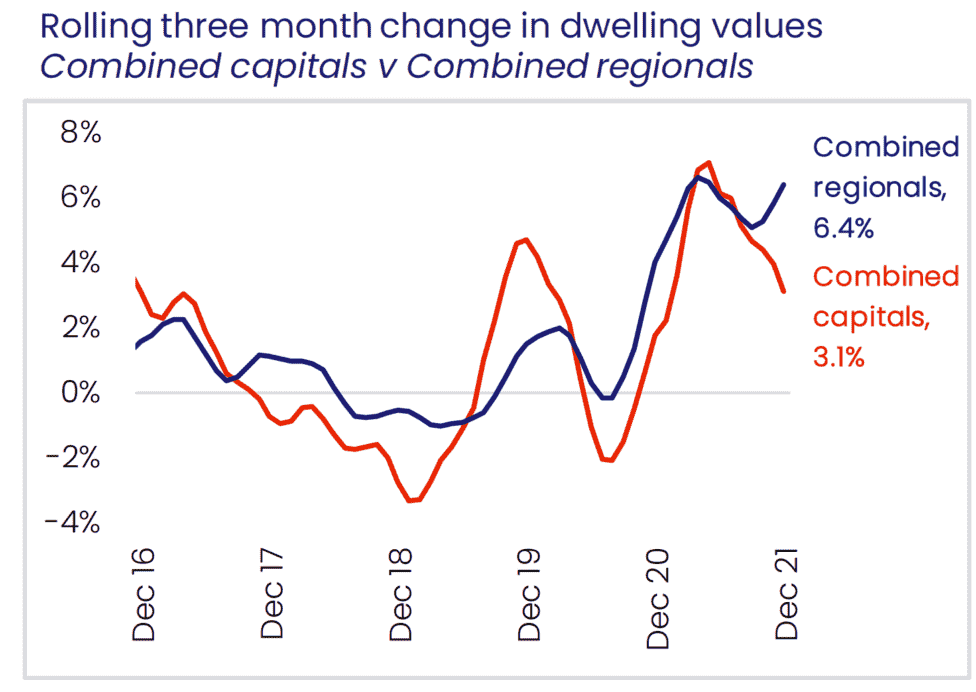 After leading the upswing, it is clear the upper quartile of the housing market is now leading the slowdown.

Across the combined capitals, upper quartile dwelling values were up 2.6% in the December quarter compared with a 3.7% rise across the lower quartile and broad middle of the market.

We have seen this trend in previous growth cycles, where more expensive housing markets have shown greater levels of volatility; housing values tend to rise more through the upswing but record a larger decline through the down phase of the cycle.

A two-speed market is emerging across the state capitals.

While the pace of capital gains has been easing in Sydney, Melbourne and Perth, conditions across the Brisbane and Adelaide housing markets have gathered momentum.

The slowing trend in Sydney and Melbourne can be explained by a bigger deposit hurdle caused by higher housing prices alongside low income growth, as well as a recent surge in advertised inventory levels and weak demographic trends.

Slower conditions across the Perth housing market may be more attributable to the disruption to interstate migration caused by extended closed state borders which has had a negative impact on housing demand.

While stock levels have generally been low, the total number of home sales in 2021 was approximately 40% above the decade average.

CoreLogic estimates there were approximately 653,000 house and unit settlements over the calendar year, the highest number of annual sales on record.

Such a significant mismatch between available housing supply and the level of demand is a fundamental reason why housing prices have risen so sharply over the year. As stock levels normalise and affordability constraints along with tighter credit conditions drag down demand, it’s reasonable to expect growth conditions will be more subdued in 2022.

2021 has been an unprecedented year for Australian housing markets...

And 2022 is likely to see a further easing in the pace of capital gains.

The number of home sales reached new record highs against a backdrop of below average listings and stalled overseas migration.

The large majority of housing demand has originated from domestic sources, fuelled by record low mortgage rates and an accumulation of pent-up demand from prior years, when housing turnover reached record lows.

As international borders re-open, rental demand is likely to be the main beneficiary, rather than home buying demand, especially across the inner city rental precincts popular with students and visitors.

The final months of 2021 saw housing values move through the fastest rate of annual growth since the late 1980s at a time when wages and household incomes hardly moved. 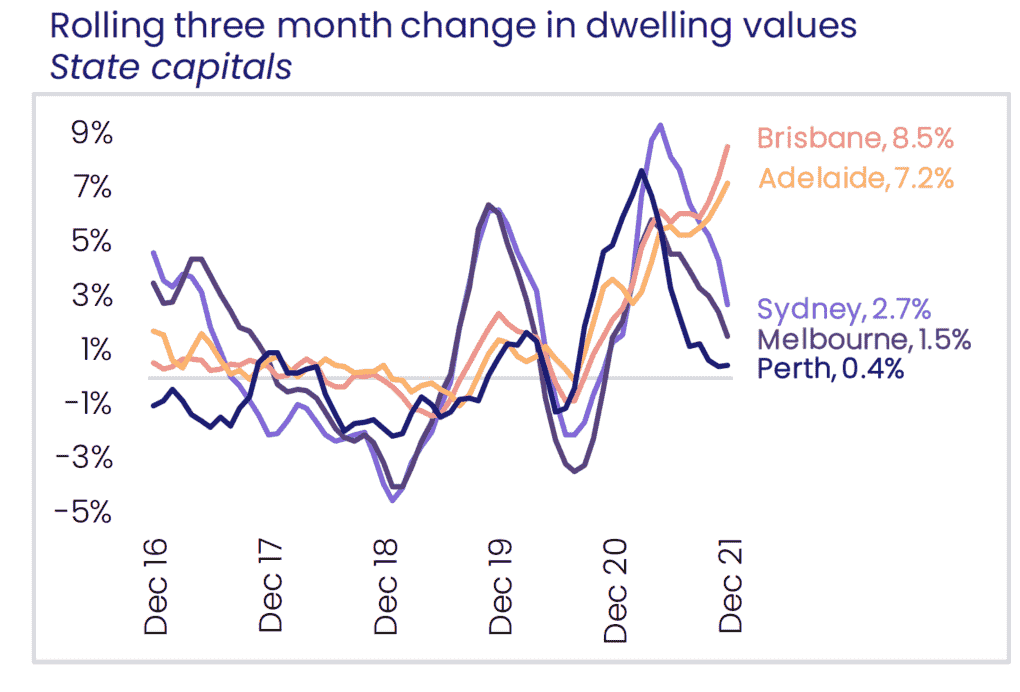 The juxtaposition of higher housing values against low income growth has resulted in higher barriers to entry: it is becoming increasingly harder to raise a deposit and fund transactional costs such as stamp duty.

It is likely housing affordability challenges will progressively weigh on housing demand over the year ahead.

Sellers have held the upper hand at the negotiation table but buyers are starting to regain some leverage.

With demand outweighing advertised supply, vendors have been empowered.

Nationally, homes were selling in 23 days early in 2021 with minimal negotiation on advertised prices, auction clearance rates were holding in the high 70% to early 80% range across the major auction markets and buyers were often experiencing a nasty case of FOMO.

The tides have started to turn however, as new listings increased in the later part of the year.

The average time on market is beginning to increase, while auction clearance rates have trended down. 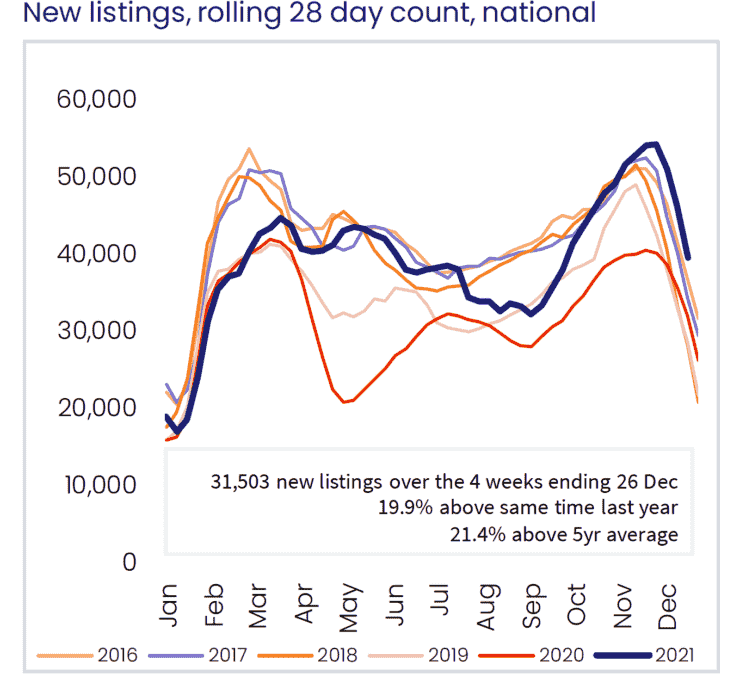 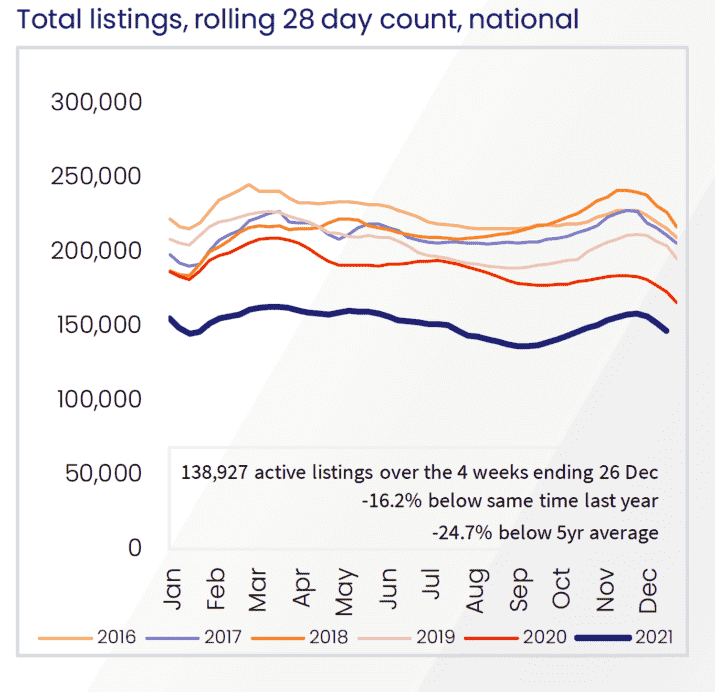 The combined capital cities auction clearance rate hit a record high 83.2% for the week ending October 3rd as COVID restrictions eased across the major capitals, but averaged just 63.8% through December.

As new listings continue to rise, and demand eases, we should see advertised stock return to more normal levels, providing buyers with some renewed leverage.

Homes are not likely to sell as rapidly and clearance rates are more likely to hold around average levels as housing conditions normalise.

Covid is the wildcard

A return to restrictive policies, especially those that prohibit movements or home inspections, would result in a new phase of temporary disruption to transaction activity.

However, such a scenario may also prolong expansive monetary policy and low interest rates, which helped sustain housing demand through 2021.

An early lift in interest rates and tighter credit policies are the other downside risks for housing.

An early lift in the cash rate implies the economy has improved enough to tighten monetary policy, however housing markets are likely to be sensitive to any increase in the cost of debt.

Similarly, a further tightening in housing credit policies would also act as a dampener on housing activity.

A more diverse performance is on the cards.

The second half of 2021 highlighted a growing disparity between the performance of different capital city and regional housing markets.

Trends in labour markets, demographic patterns, supply levels and affordability will all play a key role in how housing markets perform around the country.

Although there are some headwinds building for the housing market, we expect national housing values will continue to rise in the short term.

Even if interest rates rise earlier than expected, it is likely to be a gradual process.

The cost of debt is likely to remain well below long term averages, continuing to support housing demand for an extended period of time.