Figures released by SQM Research this week have revealed that the number of Australian residential property sale listings fell during April in most capital cities.

This has been attributed to agents experiencing a seasonal set back in listings due to the holidays.

In contrast, Darwin recorded a modest rise in listings. 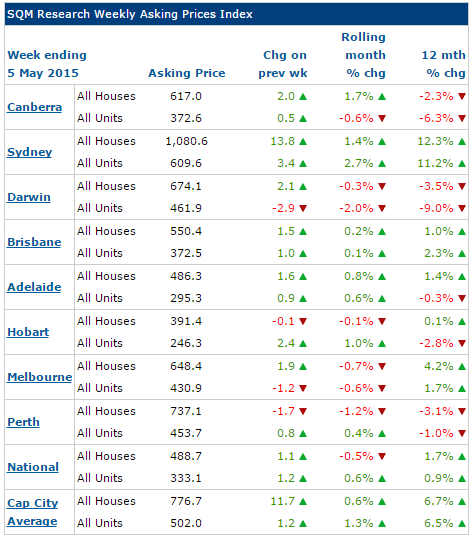 Sydney and to a lesser extent Canberra recorded the heaviest monthly falls, as a result weighing down the national average.

The Melbourne property market recorded the biggest yearly change, with listings falling by 18.2%, reducing the number of properties for sale to 36,479

Sydney soon followed with listings down 13.7% from this time last year.

Canberra’s downturn appears to be over with year-on-year figures showing a modest change of 4.6%.

We are recording some large falls in listings particularly in Sydney and now Melbourne.

In these cities there is no question right now that agents would be desperate for new listings.

However there is the contrast where in Perth and Darwin, the markets there are clearly in a downturn with too much supply and not enough demand.

These numbers clearly illustrate there is no national housing boom.

But clearly, the Sydney market has become the ‘problem child’ for the RBA and it looks like Melbourne is now heading that way as well.

Asking prices in Sydney rose again, with a monthly rise of 1.4% for houses and 2.7% for units.

The median asking price for a house has now reached $1,080,000 while the median unit in Sydney is now advertised at $609,600, according to SQM Research.

Melbourne recorded a surge in asking prices with a rise of 4.2% for houses, and 1.7% for units.

In contrast, median asking house prices in Darwin continue to fall with year-on-year comparison showing a 12 month decline of 3.5%.