Recent information released by the state government show that the Eagle Farm – Pinkenba precinct will be the fastest growing economic area outside of the Brisbane CBD over the next 15 years.

The headline act for this transformation is the addition of a second runway to the Brisbane Airport at a cost of $3.8bil.

This will enable the airport precinct to be transformed to have the same capacity as other international cities such as Hong Kong and Singapore.

Part of the transformation will also see an extension of the basic commercial and retail precinct, that already includes the DFO and companies like Woolworths and Dan Murphys.

New projects such as the $300mil BNE Automall has seen companies like AP Eagers join anchor tenant Sci-Fleet motors take up residence at this 61,400m2 home.

International brand Miele is also set to take up residence in one of the new warehouses on offer and Qantas has chosen Brisbane as its new base for their Dreamliner aircraft.

To cater for this expansion, the Government has been proactive in building the AirportLink, a series of tunnels linking the Brisbane CBD to the Airport and Northern suburbs.

There is also currently extensive infrastructure works happening along Kingsford Smith Drive to allow more lanes of traffic and a speedier journey in and out of this economic hub. 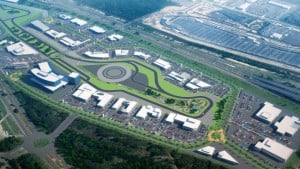 Following on from the expansion of the CBD, this will again create a huge amount of jobs in Brisbane for both the airport services and commercial sides of things as companies and businesses scramble to this precinct.

Not only that but it will open up Brisbane to immigration and tourism from all over China, with a number of their local airlines signing on to the second runway.

A large jobs boost, an increase in immigration and tourism are all key ingredients that will get our economy moving again and start putting upward pressure on prices.

I spoke to Rachel Crowley from the Brisbane Airport Corporation about this transformation in a lot more detail: