This is the best result for ALP since Malcolm Turnbull became Prime Minister in September 2015.

However, if a Federal Election were held now the result would be too close to call and would likely result in a hung Parliament according to Roy Morgan Research.

This is the lowest the Government Confidence Rating has been since Malcolm Turnbull became Prime Minister. 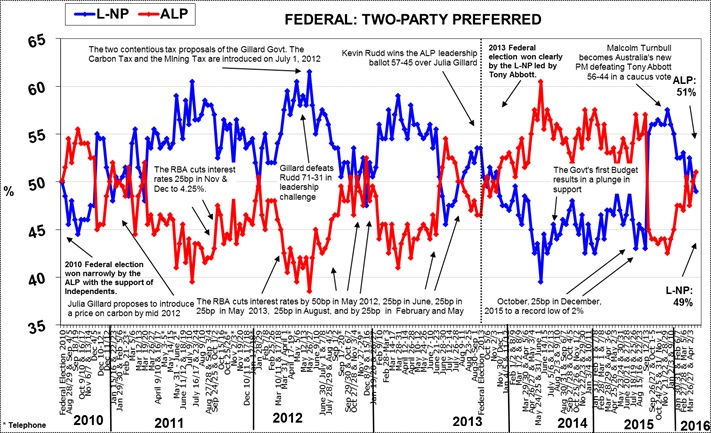 This week’s Morgan Poll on Federal voting intention was conducted over the last two weekends, April 23/24, 30 & May 1, 2016, with an Australia-wide cross-section of 2,951 Australian electors.

The L-NP now holds a two-party preferred lead in only two Australian States. 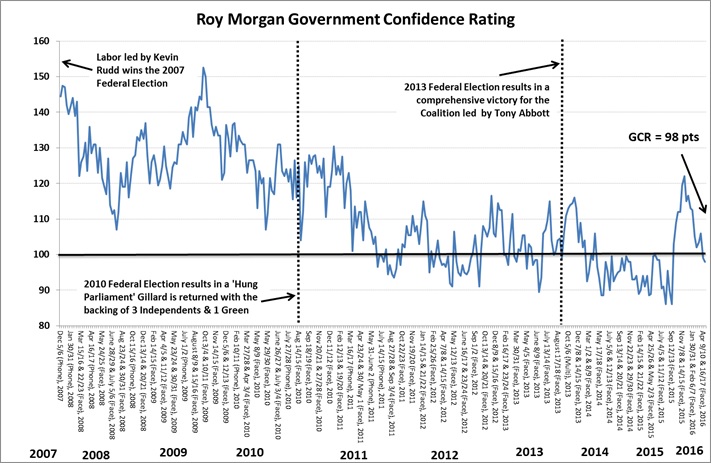 “The ALP 51% (up 1%) has a narrow lead over the L-NP 49% (down 1%) on a two-party preferred basis as Treasurer Scott Morrison prepares to deliver his important first Federal Budget tomorrow night. Prime Minister Malcolm Turnbull has confirmed he will call a Double Dissolution Federal Election for Saturday July 2 by the end of this week.

“The looming Federal Election means tomorrow’s Federal Budget is the Turnbull Government’s best chance to shape the narrative and lay out the ground on which this year’s Federal Election will be fought. Some parts of the Budget have already been leaked including tax cuts for middle-income Australians earning $80,000+, cuts to generous high-end superannuation tax concessions, additional company tax cuts and a significant boost to infrastructure spending around Australia.

“It’s reported the Treasurer will announce infrastructure spending of over $2 billion in both New South Wales and Victoria as well as hundreds of millions of dollars for the other mainland States of Queensland, Western Australia and South Australia.

“The Government has clearly gone into ‘election-mode’ already with the announcement last week of a $50 billion defence spending commitment to build 12 new Shortfin Barracuda submarines in South Australia – although under contract to French company DCNS (Direction des Constructions Navales Services).

“An additional concern for the Government, which will start the official Federal Election campaign behind the Opposition, is the continuing drop in the Roy Morgan Government Confidence Rating – now at 98 (down 1pt) – the lowest it’s been since Malcolm Turnbull became Prime Minister in September 2015.”