About 7 per cent of Australian mortgage holders have little or no real equity in their homes, according to Roy Morgan Research .

In the 12 months to October 2016, the latest Roy Morgan Research data has identified 6.9% (302,000) of Australian mortgage holders as having little or no real equity in their home.

This is based on the fact that the value of their home is only equal to or less than the amount they still owe, placing them at considerable risk if they have to sell or prices decline.

Apart from the ability to keep up with mortgage repayments (ie mortgage stress), another critical factor in assessing financial risk for mortgage holders and banks is to compare the value of their property with the amount outstanding on their loan.

The purpose of this is to establish the level of equity (if any) that householders have in their home as this generally accounts for the major component of their assets.

Mortgage holders in WA and SA at increased risk

Value of home is less or equal to amount owing 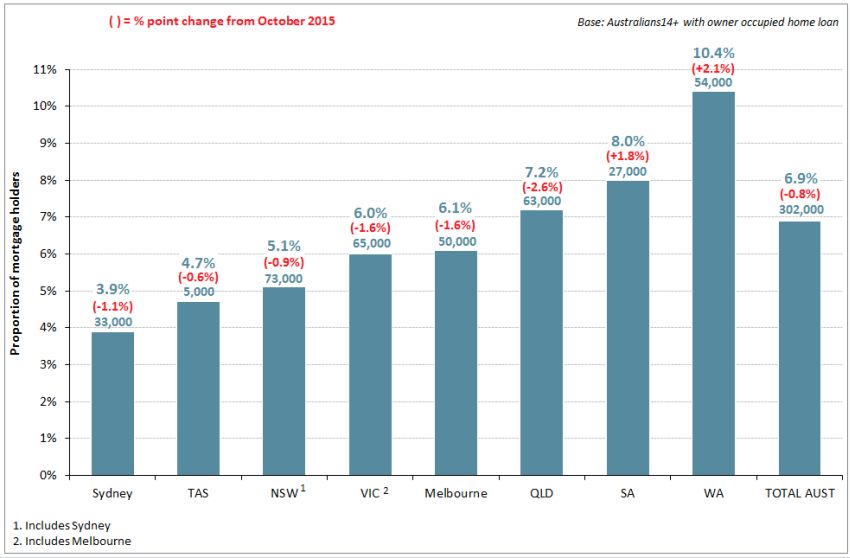 Of all the states and two largest cities included in this analysis, Sydney has the lowest proportion of mortgage holders with little or no equity in their home: just 3.9% (33,000), down 1.1% points in the last year.

This improvement is due to home prices increasing faster than in most other areas of Australia and outpacing the growth in the average amount owing on mortgages.

Mortgage gearing or risk lowest in Sydney and Melbourne

The average loan outstanding as a proportion of the average home value (the loan-to-value ratio or LVR) is an important market metric when assessing overall risk in the mortgage market.

The lowest overall mortgage gearing is in Sydney (28.9%) and Melbourne (32.4%), due mainly to the very rapid growth in average property values. 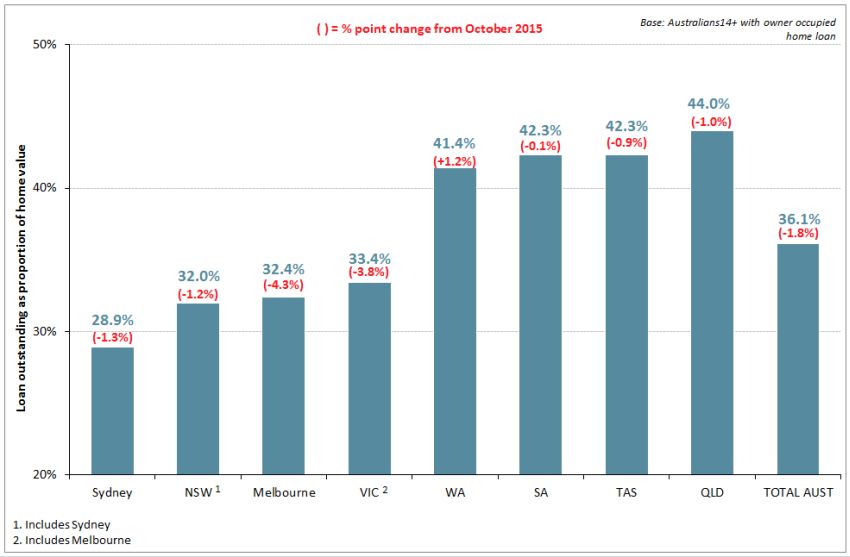 All states other than Victoria and NSW have much higher gearing levels due to negative or marginal increases in property prices. 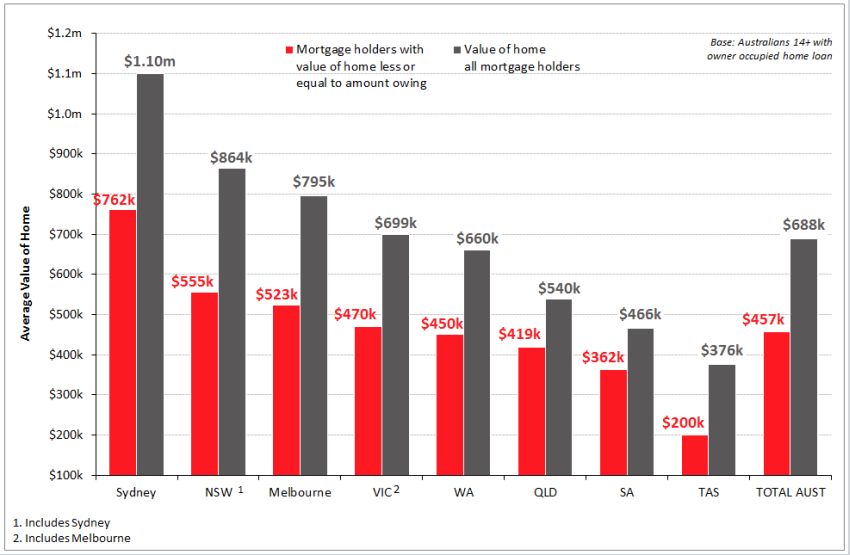 In Sydney for example, the average value of homes with a mortgage is $1.1m, compared to the much lower average of $762,000 for mortgage holders with no real equity.

In Melbourne the figures are $795,000 for the average value of a home with a mortgage, well above the $523,000 for those with no equity in their home.

“Despite some improvement over the last twelve months, there are still over 300,000 home borrowers who have no real equity in their homes.

This represents a considerable risk to these households and their banks, particularly if home values fall or households are hit by unemployment.

With some early signs that home loan rates are rising, the problem is likely to worsen as repayments increase and home values may decline, which has the potential to lower equity levels even further.

“Due to the strong growth in house prices in Sydney and Melbourne over recent years, mortgage holders in those areas have high levels of equity but are still dependent on a strong labour market and low interest rates to maintain their strong position.

“There are a number of potential reasons that some borrowers are not gaining equity in their homes despite a generally strong property market.

These include being in areas with declining values, apartments in Sydney and Melbourne losing value, borrowing more than the real value of the property, falling behind in mortgage payments, and increased borrowing for renovations that haven’t been reflected in increased property values.

“The slowdown in WA’s mining sector is seeing the highest proportion of mortgage holders faced with little or no equity in their homes, and this position has deteriorated further over the last twelve months.

“It is clear that borrowers in lower-value homes are among the most likely to be faced with the problem of low equity levels. Higher-value properties with a mortgage appear to be in a much less risky position because they are likely to have had their loan longer and may have had a far larger deposit, particularly if they traded up.

“Although the majority of Australians with a mortgage have considerable equity in their home, there is always speculation that the rapid growth in house prices must soon come to an end and when it does, so will the growth in home equity.

“This data is drawn from the Roy Morgan Single Source survey of more than 100,000 interviews over the last two years and covers only a fraction of the finance data that is available. Over the last twelve months alone we have interviewed more than 10,000 owner-occupied mortgage holders, enabling an in-depth understanding of their entire financial position. This database is unique in terms of size and depth, enabling detailed insights for anyone involved or interested in this key aspect of Australian household finances.”