Sale listings were abnormally high for most capital cities in April largely due to the extra ‘weekend’ of sales activity, with a total five Friday’s occurring during the month.

That said, year on year results have recorded sizeable rises for a number of capital cities:

Notably, property listings in Sydney and to a lesser extent Canberra are considerably higher than this time last year (April 2015).

The Sydney market experienced a yearly rise of 37.8%, with residential property listings climbing from 19,648 to 27,080.

Canberra also experienced yearly growth with sale listings up 15.1% based on a total 3,603 listings.

The listings counts indicate that the number of property sellers in both residential markets has increased markedly when adjusting for seasonality.

In contrast, year-on-year results for Hobart reveal that that once again, this capital city experienced yearly falls.

Hobart recorded the biggest yearly change, with sale listings falling by 5.2%, reducing the number of properties for sale to 3,843.

Stock on market has materially increased for Sydney, indicating the slowdown is still occurring in the market.

Buyers now have much more choice of homes compare to this time last year. 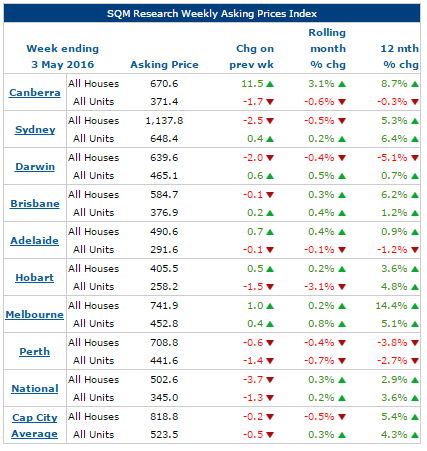 Year-on-year results reveal Melbourne median asking prices have risen 14.4% for houses and 5.1% for units compared to this time last year.

Sydney has also experienced yearly changes with median asking prices for houses climbing 5.3% and 6.4% for units

'Abnormally High Sale Listings Recorded for April 2016' have no comments