If the stars align, consumers will benefit from increased economic activity in the short term, and if they don’t, then the economic recovery will have consumers saving more in uncertain times, writes…

The Reserve Bank today kept interest rates at a record low of 1.5%.

Such low rates create economic uncertainty – and if Australia’s historical GDP growth is anything to go by, consumers face more uncertainty than the bottoming out of interest rates would usually suggest.

This is because high house prices lead home-owners to feel wealthy, yet the economy as a whole does not convey a message of wealth to all consumers.

Boom and bust come and go, and sometimes you can be forgiven for feeling economic déjà vu.

But how might Australians react to record low rates this time around?

Business moves in cycles over time, so economists sometimes look to history as a guide to what might happen next.

A flattening out of interest rates can mean many possibilities for consumers and businesses.

Historical GDP growth rates would indicate that the business cycle is at the same stage as in 2011.

But what this means for consumers depends on how the other economic “stars” align.

The indicators from 2011 are able to provide a model of how consumers may react over the coming years.

The rise in unemployment from 4% to 6% between July 2008 and May 2009 occurred at the same time as the Reserve Bank rapidly slashed the target interest rates.

However, with the Reserve Bank now unlikely to reduce interest rates any further, the impact on unemployment and other pointers for consumer behaviour may be different this time compared to 2011.

To predict consumer behaviour in the current uncertain conditions, the most appropriate method would be to consider past situations where GDP has gone up, and reflect on changes to key consumer indicators.

Based on Australia’s current GDP growth rates, and those of the last few decades, we are most likely at the “February 2011” stage of the business cycle – when growth was at 1.9%.

Based on the business cycle method of anticipating future consumer indicators, we would expect the trend to continue. 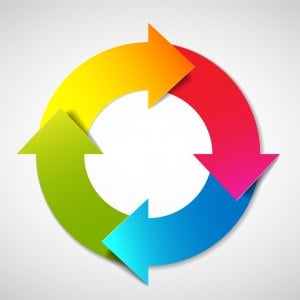 Consumers would save the same or less of their income.

And consumer sentiment would remain flat.

However, with property prices at all-time highs in capital cities, it is possible this will counteract rising interest rates when it comes to consumer expectations because there are conflicting messages.

On the one hand, consumers feel wealthy because of property prices.

However, they are expecting their mortgage repayments to increase when interest rates start to tick up.

In this environment it is expected that unemployment remains steady, as it has since 2009, with the sharemarket remaining flat.

It is expected that as the sharemarket remains flat (or modestly increases) across developed countries, the price of gold continues to rise.

We can make these sorts of predictions, if 2011 is a guide to what will happen in the coming years.

But using 2011 as a benchmark to help predict future trends relies on the basic academic assumption that the points of reference (2011 and 2017) are identical.

The world of 2011 was vastly different from the world today – it was almost naively uncomplicated.

The differences between 2011 and 2017 will likely result in further dampening effects on the economic recovery.

One of the major potential dampeners is Australia’s relatively high level of government debt.

The reduction in government debt in 2007 occurred almost simultaneously with the global financial crisis, higher consumer saving rates and a steady decline in GDP growth each quarter.

This is despite a bottoming out of interest rates, which indicates the economy is projected to be on the way up.

Today’s world poses many challenges to forecasting how consumers will behave.

One of the primary issues is high levels of debt (both for consumption and for property), which means a rise in interest rates will directly impact Australians.

However, high property markets give consumers a feeling of wealth, despite the extreme lack of diversification across asset classes, and property that is hard to sell.

As statements are made about improving economic prospects, individual consumers are feeling financial strain.

Combine these forces with increasing market complexity, product advances, geopolitical issues and climate change, and a certain level of unease is weighing on Australian minds, which goes over and above the likely increase in mortgage repayments.

Technology disruptions are likely to further reduce trust in institutions, particularly banks, but may ultimately give consumers a greater feeling of empowerment and control.

In 2011, technological financial disruption was just a sparkle in Bitcoin’s eye.

Many consider the future economy will be the collaborative economy.

The collaborative economy is one in which consumers and businesses share their resources (for a fee).

This increases efficiency and saves cost to the end consumer.

For example, AirBnB (the largest accommodation provider in the world, which owns no accommodation) connects people who have extra space with travellers who are seeking an authentic, low-cost experience while travelling.

If the shift toward the collaborative economy continues, large institutions – particularly banks – will find it more difficult to make the significant profits they are used to.

Since 2011, consumers across the world have shifted to more community-based banking systems and have lent directly to others to achieve higher interest rates than bank deposits – particularly in a low-interest-rate environment.

This trend is likely to continue.

Coupled with decreasing trust in institutions, it makes it unlikely that the predicted trends will be identical to those in 2011.