They report that close to one fifth of new properties in Sydney are being bought by wealthy Chinese investors and the flood of money is set to continue.

“Credit Suisse estimates that Chinese buyers account for 18 per cent of new property purchases in Sydney, and 14 per cent of the supply in Melbourne. This does not include second-hand homes.” 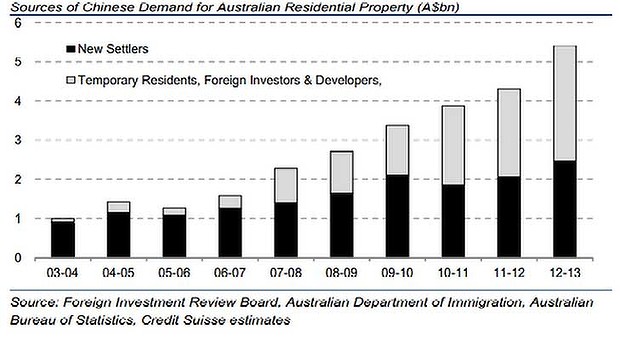 “A generation of Australians are being priced out of the property market. Many face a life time of renting,’’ Credit Suisse analysts Hasan Tevfik and Damien Boey said.

There are currently 1.1 million millionaires in China who could easily afford properties in Australia’s two most expensive markets, Credit Suisse says in a research note.

Wealthy Chinese buyers have purchased $24 billion of Australia housing in the past seven years, and over the next seven years an additional $44 billion will be spent on residential property, Credit Suisse estimates.” 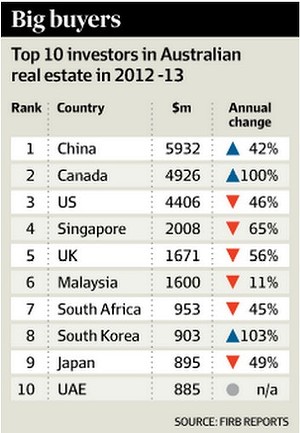 “There was $17.2 billion worth of approved residential property investment coming in from overseas in the year June 30 2013, down from $19.7 billion in the previous period, according to the Foreign Investment Review Board.

Of the 2013 total, $5.6 billion was approved for residential properties in New South Wales.[sam id=41 codes=’true’]

That number may seem large, but across the whole property market the effect dissipates.

There is, on average, a 6 per cent turnover annually in Australia’s property, according to the Reserve Bank of Australia.

The total value of Australia’s property market is $5.02 trillion, according to the ABS, so yearly turnover in the housing sector would is roughly $360 billion.

Chinese buyers are currently spending $5.4 billion a year on Australian properties, Credit Suisse said, with the split relatively even between new settlers and others, which include investors, developers and temporary residents.”

While Chinese investors may be pushing new and particularly off the plan apartment prices higher, they are not the reason for rises in established home prices as they cannot buy this type of property.

This segment of the market is being by low interest rates, generally good affordability and established home buyers upgrading and downsizing as well as investors buying real estate, often in the Self Managed Super Funds