The property pessimists are at it again – scaring anyone who will listen telling us the property bubble is about to burst.

While they are focusing on Sydney, some also believe soaring house prices in Melbourne have put it into bubble territory.

However Christina Zhou busts the property bubble myth in Domain by looking at some historical data.

Here’s what she found:

1. House prices are growing only at a third of the rate as in the late 1980s

Historical data shows there have been periods of much higher growth in the Melbourne property market than the past two years.

Strong periods of growth, such as the 35.6 per cent seen in late 1980s, was followed by a drop of 6.7 per cent – the largest fall recorded in the time series.

Experts say it’s evidence that Melbourne has never seen a bubble, and that the periods of price falls were more of a correction as opposed to a crash.

Domain Group senior economist Dr. Andrew Wilson  said the period of “extraordinary” growth in the late 1980s was followed by the collapse of the Melbourne economy, with interest rates pushing up towards 20 per cent.

“That took the heat out of the market and created a recession in Australia, but the recession was the deepest in Melbourne. 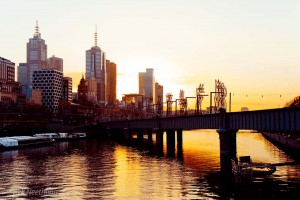 “The result of that was just a track back of 6.7 per cent in the median.”

The second biggest drop after the next highest rate of growth in the post global financial stimulus period was just 4.4 per cent in 2011-12.

“The bubble scenario should reflect prices falling as much as they have grown in the cycle,”  Dr Wilson said.

2. Real price growth over the past five years has been flat

Melbourne’s house prices grew by 12.7 per cent since the previous peak in the cycle (June 2010).

According to Dr Wilson, the real price growth, which takes the 11.1 per cent inflation into account, has been just 1.6 per cent.

3. Oversupply is concentrated in Melbourne CBD

Across greater Melbourne, more than one in four apartment project approved is located in the City of Melbourne, according to data from the Australian Bureau of Statistics.

Dr Wilson said data showed the oversupply was in the CBD, where the market had been flat over the past decade.

“Even though there’s been some growth, there hasn’t been spectacular growth,” he said.

“It’s been really a case of oversupply and then demand catching up.”

As a substantial number of apartments work their way through to completion, new residential zones implemented by councils in the city’s inner and middle ring suburbs have made it harder for developers to build medium and higher density housing.

4. Eastern suburbs have been the strongest players, but growth elsewhere have been average or modest

A housing bubble usually results after a period of above-average levels of house price growth, where prices are pushed up by something outside the norm as opposed to the fundamentals of demand and supply.

But across Melbourne, only the inner east, inner city and outer east have registered double-digit growth in the year to March.

Dr Wilson attributed the strength of the inner east to demand from changeover buyers, whowere taking advantage of lower interest rates and a perception that it was a good time to buy.

The outer east also recorded significant house price growth after rising 10 per cent over the year to March, which he said was buoyed by buyers looking further out in search of value.

“That’s created a lot of momentum and a lot of rising confidence in those markets,” he said.

Thanks to lower interest rates, the average buyer is using a lower proportion of their income to pay their mortgage.

According to Dr Wilson’s analysis of ABS and Domain Group datas, an average homeowner used 28.2 per cent of their income in March 2015 compared with 36.9 per cent in March 2011.

The percentage of households under mortgage stress (using more than 30 per cent to make their repayments) was just 2.7 per cent.

You may also be interested in this detailed report: The Melbourne Property Market – 29 INVESTOR TIPS