A new survey by finder.com.au, one of Australia’s biggest comparison websites1, has revealed the results.

The research found one in five Australians don’t have enough saved to cover even a $500 setback – that’s 3.6 million adults nationwide.

Bessie Hassan, Money Expert at finder.com.au, says the findings are ‘alarming’ – and proof that it’s very tight for many Australian households out there.

“Minor emergencies like car repairs or a root canal can happen at any time, but for the majority of Australians such unexpected costs could mean a financial nightmare,” she says.

Shockingly, almost one in eight Australians (12%) have less than $100 on hand for an emergency.

These people would be under enormous pressure if something went wrong – not a position anyone wants to be in.

Many Aussies are living paycheck to paycheck. Living with the knowledge of little or no emergency fund can put huge stress of families already under pressure.”

When asked about unexpected situations that had happened to them, almost a quarter (24%) of Australians said they had experienced redundancy.

Other financial emergencies experienced by the respondents were:

Ms Hassan says fewer than half of Australians have a stash of at least $5000 to pay for unexpected expenses.

“It’s alarming that only 41% of the population have a sizeable sum set aside for a rainy day.

“I urge Australians to do whatever they can to save a buffer of cash, from slashing expenses to seeking better financial deals.

“Every household in Australia needs to have some money set aside to protect them from these situations.

“Borrowing money in times of financial desperation can put households on a downward spiral.” 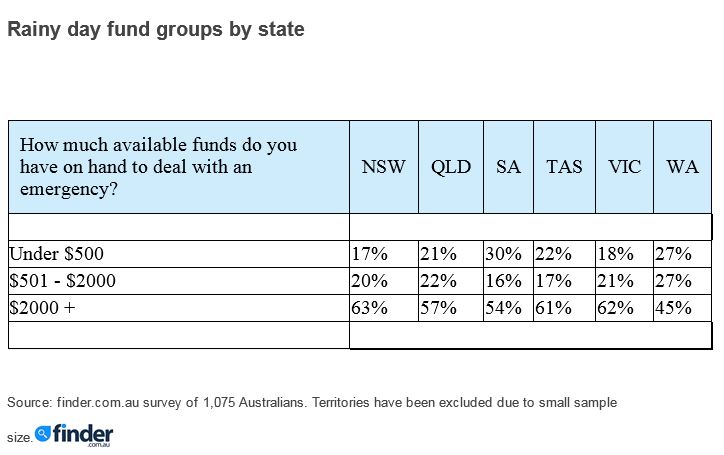 How to build your rainy day savings

1. Have a smart goal: When setting yourself a savings goal, be realistic – it’s not going to happen overnight. 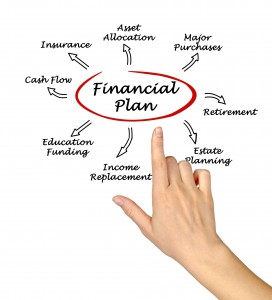 Give yourself a timeframe to keep you on track.

Doing this will allow you to analyse all your outgoings and deduct this from your income to give you an idea of what you should be aiming for – and what is realistic – to save each month.

2. Set up an automatic savings plan: A separate savings account with automatic payments will allow you to directly debit some money from your everyday account each payday.

No matter how big or small, the key thing here is that you’re saving some cash regularly and watching your emergency fund grow.

3. Reduce expenses: Work out where you can cut back.

Look at all your outgoings – loans, utilities, petrol, groceries, insurance and come up with a plan to reduce them.

Use a comparison site like http://www.finder.com.au/insurance to find cheaper deals.

There are some very good deals around and you may be paying too much. By doing an audit of all expenses you could save thousands which could be added to your rainy day savings.

4. Save your tax refund: As the end of the financial year approaches, consider depositing any refund into a high interest savings account.

Do it every year and it can add up big.

5. Sell unwanted goods: A great way to get a quick cash injection.

Clean out your cupboards and sell any unused clothes, furniture and appliances.

Have a garage sale or sell your belongings online.

The proceeds can give your rainy day savings a much needed boost.

'3.5 Million Australians can’t handle a $500 financial setback' have no comments