While he is confident of another positive year for property in 2014,  he also has a few warnings.

Today I look at his national property market overview and then we’ll look at how some of the individual states are performing and what’s likely to be ahead over the next few days.

Over 2013, the Australian capital city housing market recorded its best year for prices growth since 2009. The national median house price increased by up to 9 percent compared to 10 percent in 2009.

Contributions to the solid rise in the national house price were mixed.

The Sydney real estate market was the outstanding performer, with local prices increasing by up to 13 percent over the year. Melbourne and

Perth recorded solid prices growth of up to 8 percent, however prices growth in Brisbane, Adelaide and Canberra was subdued by comparison.

Low and falling interest rates were the underlying catalyst for the overall improvement in housing market activity throughout 2013.

The lowest headline rate in 60 years significantly improved affordability for home buyers, however local factors dictated the level of prices growth – in particular the performance of local economies.

The national housing market will record positive growth again in 2014, although the level of growth will likely be half that recorded in 2013. Local economic conditions will continue to be a key driver of prices growth, with those export-focused resource economies likely to perform best within a lower and falling dollar environment.

However, rising unemployment and falling living standards will impact other local housing markets, particularly in Sydney and Melbourne. 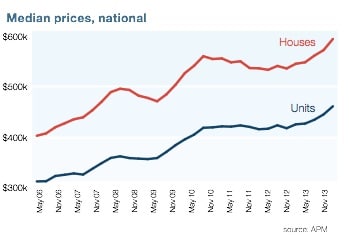 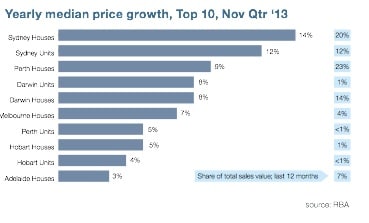 I’ll be publishing APM’s finding for each of our major capital cities over the next few days.