More good news for those of us interested in property was released today.

The Australian Bureau of Statistics reported an increase in dwelling approvals, particularly for houses and the Housing Industry Association reported that new home sales soared by 7.5% in November last year to a two-and-a-half-year high.

More than 7000 new dwellings sold during the month, a level not seen since May 2011.

Dwelling approvals are a leading indicator for our property markets – they’re a sign of what’s ahead for the next year.

Private sector house approvals are now up 18.0% over the year, a sign that the RBA’s intention to boost oour economy through the construction industry is slowing working. 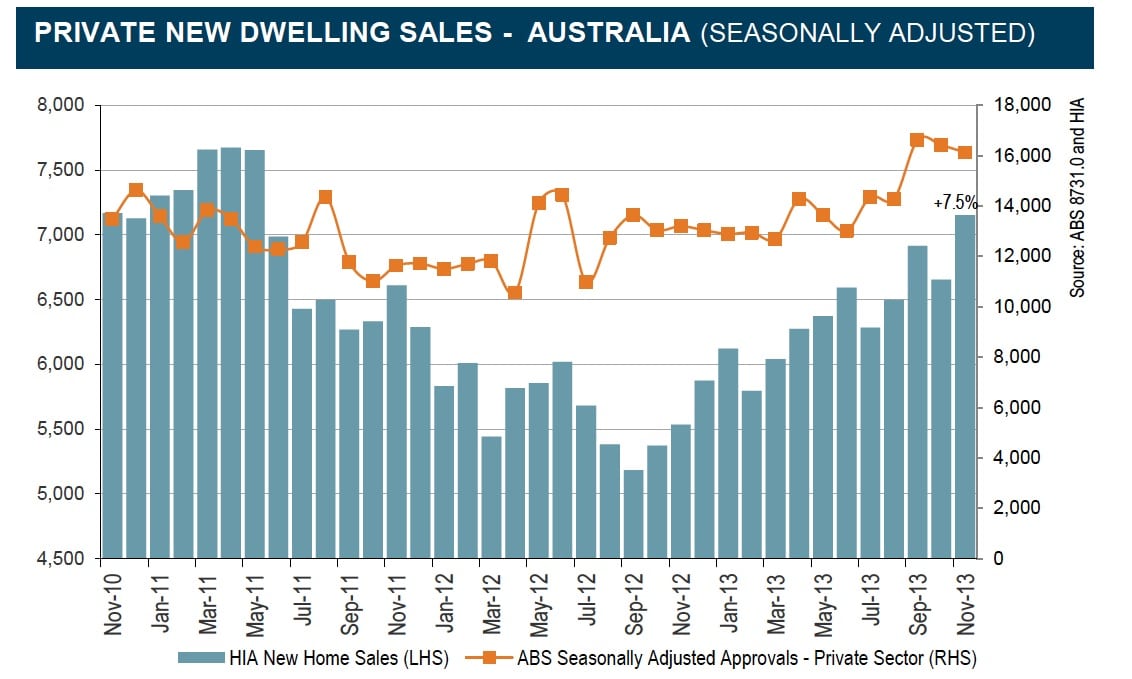 “New home sales grew by 7.5 per cent in November last year, the fastest monthly growth rate since January 2010, to reach a two and a half year high. The upward momentum evident in new home sales since the closing stages of 2012 continued late last year – that is a good sign for residential construction activity in 2014.”

“Both new home sales and private sector building approvals increased strongly over the three months to November last year, with detached housing growing by around 4 per cent according to both leading indicators, for example.

“We need to see upward momentum in these leading indicators continue throughout 2014. For new home sales the first ‘milestone’ to look out for will be sales once again reaching the volumes experienced in the first half of 2011.”
“Over the three months to November 2013 the volume of detached house sales increased in all five surveyed states, while the downward trend evident in multi-unit sales has now reversed due to strong
monthly outcomes in both September and November of last year,”

In the latest HIA New Home Sales report, a survey of Australia’s largest volume builders, the healthy 7.5 per cent increase in total seasonally adjusted new home sales was driven by a 30.5 per cent jump in multi-units together with a 3.6 per cent lift in detached house sales.

In the month of November 2013 private detached house sales increased by 19.1 per cent in South Australia and were up by 8.1 per cent in New South Wales and 16.0 per cent in Queensland.

Over the three months to November 2013, detached house sales increased in all five surveyed states, as was the case in the October 2013 ‘quarter’.

The largest increase over the three months to November 2013 was in South Australia (+26.8 per cent), followed by Queensland (+8.7 per cent), Victoria (+2.4 per cent), and Western Australia (+2.1 per cent). New South Wales sneaked over the line with quarterly growth of 0.1 per cent.