If you cornered me and asked me “out of all the factors that influence property prices – what is the number 1 driver of capital growth?” – I’d have to say affordability.

But don’t get me wrong – it’s probably not what you think!

Unlike many others I don’t look for affordable properties.

I look for areas where disposable incomes are high and people can afford to and are prepared to pay a premium to live.

Let me explain how I do this…

Over the last five years census period, wages in Australia went up around 20%, but in some municipalities wages went up double that.

In these areas people clearly had higher disposable incomes.

They could spend it on fancy cars or big plasma TV screens but many spent it on doing up their homes or buying better, fancier homes.

These are the sort of areas I like to invest in – locations where there is a wide demographic of affluent people who can afford to, and are prepared to, pay a premium to reside there because of the amenities and lifestyle the location offers.

So how do you find these areas?

If you’ve been following my thoughts for a while, you’d know that I have always recommended investing in our four big capital cities rather than in regional locations.

But it’s more than that – I drill down to a group of suburbs that will outperform the averages and these tend to be in the inner and middle ring. 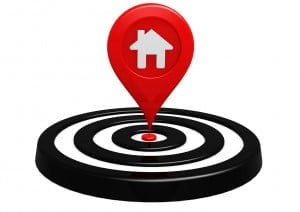 Recently the Grattan Institute produced a study called Mapping Australia’s Economy and they came to the conclusion that 80% of the value of all goods and services produced in Australia is generated on just 0.2% of our land mass, leading to the inescapable conclusion that “cities are the engines of our prosperity.”

The report maps the Australian economy by the location of economic activity, defined as the dollar value of goods and services produced by workers within a particular area.

It finds that economic activity is concentrated most heavily in the central business districts (CBDs) and inner areas of large cities.

This is partly because of the concentration of jobs in our Central Business Districts, but also because jobs based within the inner cities are more productive than those located elsewhere.

Interestingly the CBDs of Sydney and Melbourne – just 7.1 square kilometres in total – generated $118 billion in 2011-12, almost 10 per cent of all economic activity in Australia, and triple the contribution of the entire agriculture sector.

There is a reason intense economic activity is concentrating in CBDs and inner suburbs.

Many businesses in these areas provide highly knowledge-intensive and specialised services such as funds management, insurance, design, engineering and international education.

These businesses depend on highly skilled workers, and locating in the heart of large cities gives them access to the largest possible pools of them who like to (and can afford to) live close to their jobs.

Now this is very different to how it was in the past:

In the early 20th century one in three workers were employed in primary industry and almost half of the population lived on rural properties or in towns of less than 3,000 people.

The red areas on the map below (0.2% of the land mass) are where we produce 80% of Australia’s economic activity.

Their predominance reflects the economy’s evolution from one based on primary industry, then manufacturing to increasingly knowledge-intensive services. 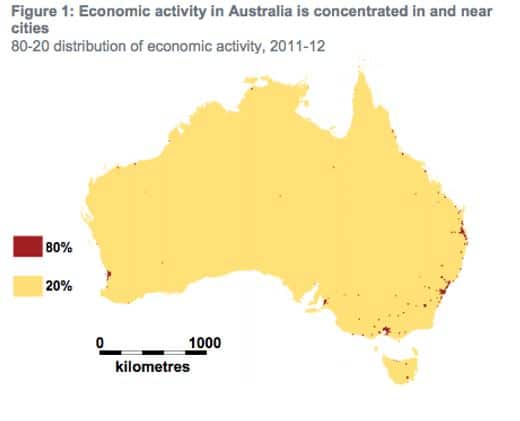 The report found that capital cities are vital to economic activity; driving most of the economy in every state as shown in the following table. 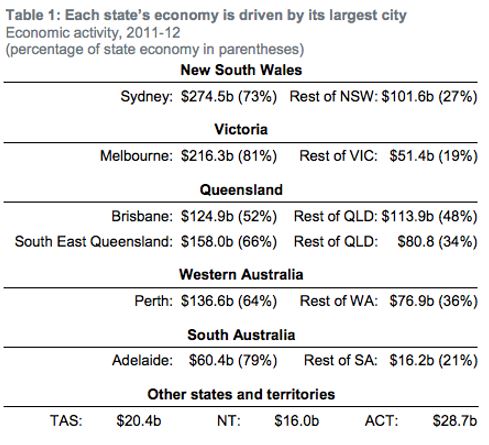 Economic activity is most intense in Central Business Districts (CBDs)

Even within metropolitan areas, economic activity is heavily focused on central areas, and in each capital city intense activity is focused on only a small number of locations.

In Sydney, for example, half of all economic activity is generated from less than one per cent of its land mass. 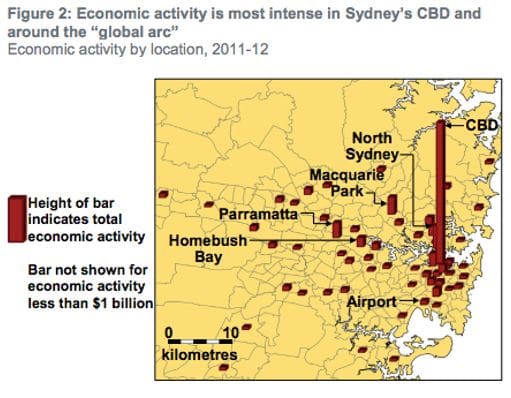 And it’s much the same in the other states: 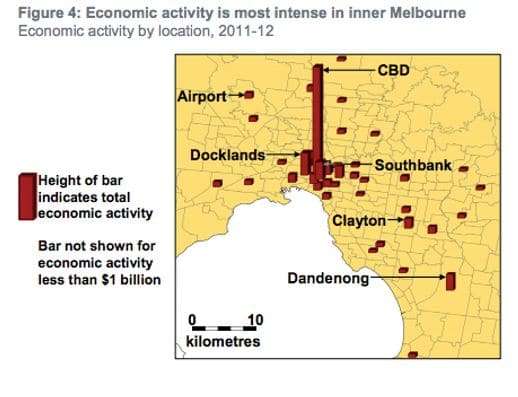 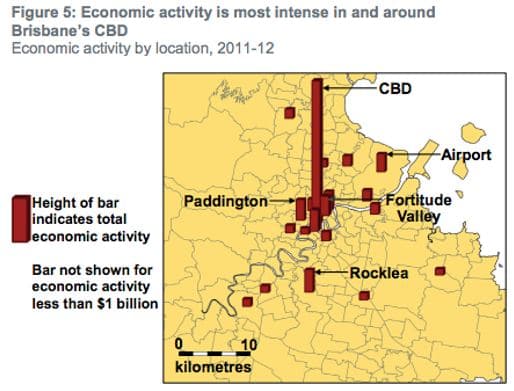 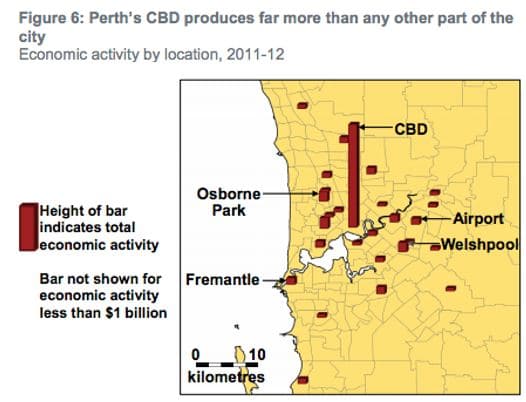 People want to live where the jobs are:

Of course, all jobs are accessible if employees are prepared to commute for long enough, yet few people are willing to spend more time commuting than they have to.

Given current travel patterns in Australian cities, job access was mapped for 45 minutes by car, and 60 minutes by public transport.

In all four cities, there is a distinct advantage in proximity to the city centre and the proportion of jobs that can be accessed declines markedly with distance.

For example, the graphic below shows that in some outer suburban growth areas of Melbourne just 10 per cent of Melbourne’s jobs can be reached within a 45 minute drive (lightest shaded areas).

In all major capital cities, concluded Grattan, there is a major advantage in living in proximity to the city’s centre. 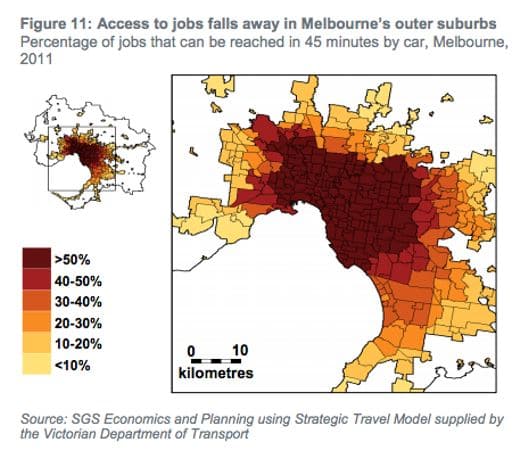 When Grattan considered public transport, their conclusions were dreadful for outer suburbs. In Sydney, for example, huge swathes of the city are almost totally cut off from access to jobs even if commuters are prepared to travel for a full hour by public transport. What this means to you as a property investor:

To me the conclusion is that as Australia’s economy continues to shift towards a more services-based economy, economic activity will become increasingly concentrated within our major capital cities.

And the trend to more medium and high density living will grow more popular as Australians put a premium on living near their jobs and where all the action is, meaning dwelling prices close to the CBD will continue to rise faster than outer ring suburbs in every capital city.

Now there’s nothing new about this….

Recent RBA’s research shows the ratio of inner ring to outer ring house prices is continuing to increase, and the ratio is notably increasing at the greatest rate in the largest cities.

“Declining job-to-worker ratios in some of the outer areas mean that many people are likely to face longer commutes than before. The trade-off between space and place is getting steeper. 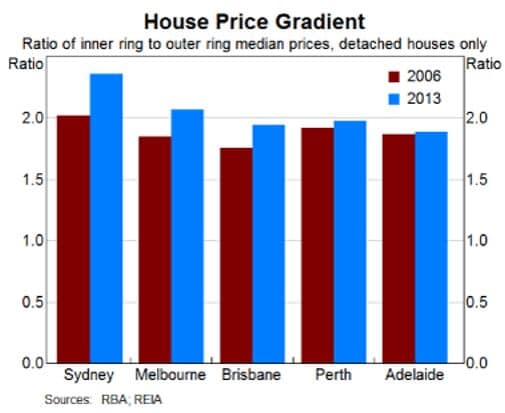 If you want to grow your wealth through property investment you’ll need to own the type of properties that will out perform the averages with regards to capital growth.

In the future this will be medium density properties as more and more of us trade our backyards for balconies within the inner and middle ring suburbs of our major capital cities, because this is where the major economic activity will occur, wages and disposable incomes will in general be high many of the amenities will be found and lifestyle attractions will abound.

However, despite the jobs being there, I would avoid buying properties directly in the CBD of our big cities, as an oversupply of properties there will dampen capital and rental growth.

So how can you capitalize on this information? 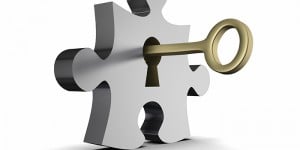 'The no. 1 driver of property price growth' have no comments